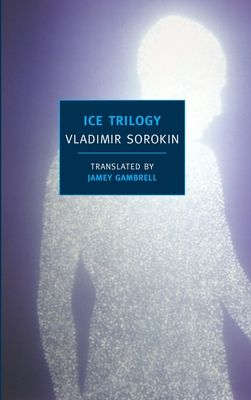 In 1908, deep in Siberia, it fell to earth. THEIR ICE. A young man on a scientific expedition found it. It spoke to his heart, and his heart named him Bro. Bro felt the Ice. Bro knew its purpose. To bring together the 23,000 blond, blue-eyed Brothers and Sisters of the Light who were scattered on earth. To wake their sleeping hearts. To return to the Light. To destroy this world. And secretly, throughout the twentieth century and up to our own day, the Children of the Light have pursued their beloved goal.

Pulp fiction, science fiction, New Ageism, pornography, video-game mayhem, old-time Communist propaganda, and rampant commercial hype all collide, splinter, and splatter in Vladimir Sorokin’s virtuosic Ice Trilogy, a crazed joyride through modern times with the promise of a truly spectacular crash at the end. And the reader, as eager for the redemptive fix of a good story as the Children are for the Primordial Light, has no choice except to go along, caught up in a brilliant illusion from which only illusion escapes intact.

"Sorokin completed the three novels of the Ice Trilogy in 2008. Now, thanks to a translation by Jamey Gambrell that heroically endeavours to capture its myriad voices, from watercolour lyricism to purest pulp, we can enjoy it in all its gaudy glory. Think William S Burroughs, and Michel Houellebecq, and Will Self, all whizzed into this delirious post-Soviet SF mash-up. I found some sections absolutely exquisite, some unexpectedly moving, some intellectually exhilarating - and plenty just grotesque and absurd, as Sorokin no doubt planned....  Ice Trilogy becomes extraordinary when Sorokin drives this old dystopian banger off the fantasy highway and into the darkest places of the Russian – and European – 20th century. In one bravura set-piece after another, he not only re-visits key tragedies of modern times, but mimics – or re-voices – the literary styles that partner them. ....  In the first volume, Bro, we begin in Chekhov territory...The middle volume, Ice, begins in the 1990s with an outlandish parody not so much of Russian life in the heyday of Yeltsin and the oligarchs as the West's cartoon representation of it.....Then in one of Sorokin's trademark lurches, we switch back to a noble Vasily Grossman-esque wartime drama... In the final part, 23,000, these wilful collisions grow more extreme. A Spielberg-style finale leaves us frozen in the postmodern fix...."  --Boyd Tonkin, The Independent

“So we yearn for certainty, salvation, the absolute-what's wrong with that? We always have and we always will. Go ahead, Sorokin seems to say; you can't really help it. Just be careful what you wish for. . . . Those readers (and reviewers) who turn to literature for consolation, or moral enlightenment, or lessons in self-esteem, are well advised to look elsewhere.”

“The Ice Trilogy is devoted to the fortunes of an apocalyptic Brotherhood whose members believe they are bodily incarnations of a primordial light. But they are only made aware of their true identity be being ‘awakened’, in a process that involves being bashed in the chest with a hammer made of ice….The fact that the readers see events through the Brotherhood’s eyes is a powerful estranging device: we are forced to accept as legitimate the perspective of delusional psychopaths, and constantly made to reread history from their point of view. This is the most provocative aspect of the trilogy: its aspiration to unsettle conventional historical narratives.” – Tony Wood, London Review of Books

Vladimir Sorokin was born in a small town outside of Moscow in 1955. He trained as an engineer at the Moscow Institute of Oil and Gas, but turned to art and writing, becoming a major presence in the Moscow underground of the 1980s. His work was banned in the Soviet Union, and his first novel, The Queue, was published by the famed émigré dissident Andrei Sinyavsky in France in 1983. In 1992, Sorokin’s Collected Stories was nominated for the Russian Booker Prize; in 1999, the publication of the controversial novel Blue Lard, which included a sex scene between clones of Stalin and Khrushchev, led to public demonstrations against the book and to demands that Sorokin be prosecuted as a pornographer; in 2001, he received the Andrei Biely Award for outstanding contributions to Russian literature. Sorokin is also the author of the screenplays for the movies Moscow, The Kopeck, and 4, and of the libretto for Leonid Desyatnikov’s Rosenthal’s Children, the first new opera to be commissioned by the Bolshoi Theater since the 1970s. He has written numerous plays and short stories, and his work has been translated throughout the world. Among his most recent books are Sugar Kremlin and Day of the Oprichnik. He lives in Moscow.

Jamey Gambrell is a writer on Russian art and culture. Her translations include Marina Tsvetaeva’s Earthly Signs: Moscow Diaries, 1917–1922; a volume of Aleksandr Rodchenko’s writings, Experiments for the Future; and Tatyana Tolstaya’s novel, The Slynx. Her translation of Vladimir Sorokin’s Day of the Oprichnik will be published in 2011.