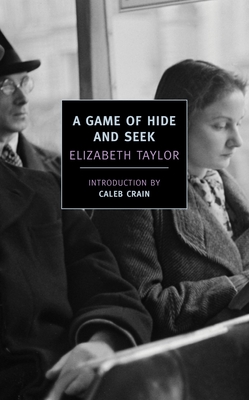 A Game of Hide and Seek

Harriet and Vesey meet when they are teenagers, and their love is as intense and instantaneous as it is innocent. But they are young. All life still lies ahead. Vesey heads off hopefully to pursue a career as an actor. Harriet marries and has a child, becoming a settled member of suburban society. And then Vesey returns, the worse for wear, and with him the love whose memory they have both sentimentally cherished, and even after so much has happened it cannot be denied. But things are not at all as they used to be. Love, it seems, is hardly designed to survive life.
One of the finest twentieth-century English novelists, Elizabeth Taylor, like her contemporaries Graham Greene, Richard Yates, and Michelangelo Antonioni, was a connoisseur of the modern world’s forsaken zones. Her characters are real, people caught out by their own desires and decisions, and they demand our attention. The be-stilled suburban backwaters she sets out to explore shimmer in her books with the punishing clarity of a desert mirage.

Praise For A Game of Hide and Seek…

“Taylor has the genius of making her characters understood, sometimes with an almost frightening clarity, perhaps because she is compassionate as well as relentless in her delineation of them.”
—The New York Times

“Funny, savage and full of loneliness and suppressed emotion.”
—Rachel Cooke, The Observer

“It is time that justice was done to Elizabeth Taylor. . . . All her writings could be described as coming into the category of comedy. Comedy is the best vehicle for truths that are too fierce to be borne.”
—Anita Brookner

“Elizabeth Taylor is finally being recognized as an important British author: an author of great subtlety, great compassion and great depth. As a reader, I have found huge pleasure in returning to Taylor’s novels and short stories many times over. As a writer I’ve returned to her too—in awe of her achievements, and trying to work out how she does it.” —Sarah Waters

ELIZABETH TAYLOR (1912–1975) was born into a middle-class family in Berkshire, England. She held a variety of positions, including librarian and governess, before marrying a businessman in 1936. Nine years later, her first novel, At Mrs. Lippincote’s, appeared. She would go on to publish
eleven more novels, including Angel (available as an NYRB Classic), four collections of short stories (many of which originally appeared in The New Yorker, Harper’s, and other magazines), and a children’s book, Mossy Trotter, while living with her husband and two children in Buckinghamshire. Long championed by Ivy Compton-Burnett, Barbara Pym, Robert Liddell, Kingsley Amis, and Elizabeth Jane Howard, Taylor’s novels and stories have been the basis for a number of films, including Mrs. Palfrey at the Claremont (2005), starring Joan Plowright, and François Ozon’s Angel (2007). In 2013 NYRB Classics will publish a new selection of Taylor’s short stories.

CALEB CRAIN is the author of American Sympathy, a study of friendship between men in early American literature. He has written for The New Yorker, The New York Review of Books, and n+1. His novel Necessary Errors will be published in 2013.
Loading...
or
Not Currently Available for Direct Purchase