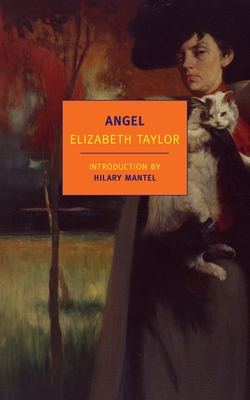 Perhaps every novelist harbors a monster at heart, an irrepressible and utterly irresponsible fantasist, not to mention a born and ingenious liar, without which all her art would go for naught. Angel, at any rate, is the story of such a monster. Angelica Deverell lives above her diligent, drab mother’s grocery shop in a dreary turn-of-the-century English neighborhood, but spends her days dreaming of handsome Paradise House, where her aunt is enthroned as a maid. But in Angel’s imagination, she is the mistress of the house, a realm of lavish opulence, of evening gowns and peacocks. Then she begins to write popular novels, and this fantasy becomes her life. And now that she has tasted success, Angel has no intention of letting anyone stand in her way—except, perhaps, herself.

“With its monstrous romantic-novelist heroine Angelica Deverell, it’s a study of extravagant self-deception that’s both achingly funny and heart-wrenchingly sad.” —The Millions

“Elizabeth Taylor is finally being recognised as an important British author: an author of great subtlety, great compassion and great depth. As a reader, I have found huge pleasure in returning to Taylor’s novels and short stories many times over. As a writer I’ve returned to her too—in awe of her achievements, and trying to work out how she does it.” —Sarah Waters

“Her stories remain with one, indelibly, as though they had been some turning
point in one’s own experience.”  —Elizabeth Bowen

“One of the most underrated novelists of the twentieth century, Elizabeth Taylor writes with a wonderful precision and grace. Her world is totally absorbing.” —Antonia Fraser

Elizabeth Taylor (1912–1975) was born into a middleclass family in Berkshire, England. She held a variety of positions, including librarian and governess, before marrying a businessman in 1936. Nine years later, her first novel, At Mrs. Lippincote’s, appeared. She would go on to publish eleven more novels, including A Game of Hide and Seek (available as an NYRB Classic), four collections of short stories (many of which originally appeared in The New Yorker, Harper’s, and other magazines), and a children’s book, Mossy Trotter, while living with her husband and two children in Buckinghamshire. Long championed by Ivy Compton-Burnett, Barbara Pym, Robert Liddell, Kingsley Amis, and Elizabeth Jane Howard, Taylor’s novels and stories have been the basis for a number of films, including Mrs. Palfrey at the Claremont (2005), starring Joan Plowright, and François Ozon’s Angel (2007). In 2013 NYRB Classics will publish a new selection of Taylor’s short stories.

Hilary Mantel is an English novelist, short-story writer, and critic. Her novel Wolf Hall won the Man Booker Prize in 2009.
Loading...
or
Not Currently Available for Direct Purchase