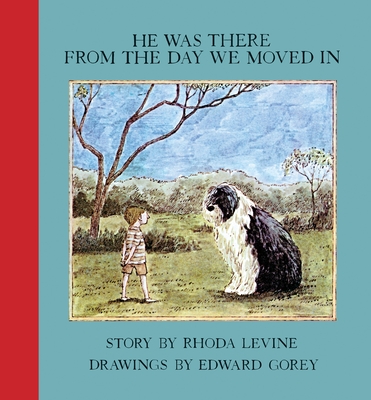 He Was There From the Day We Moved In (Hardcover)

The naming of dogs can be a tricky business, as Ogdon and his big brother discover in this charming collaboration between Rhoda Levine and Edward Gorey. You see, before Ogdon and his family moved to a new house, no one mentioned the big shaggy sheep dog in the back yard, but there he was, just sitting and waiting, imperturbable as can be. Waiting for what? Ogdon wonders. Dinner? A lollipop? A stray cat? Someone to talk to? No, what the dog wants is a name. And not just any name, but the right name. And with a little patience, and a lot of persistence, Ogdon and his brother will figure it out.

Rhoda Levine is the author of seven children’s books (two of which were illustrated by Edward Gorey) and is an accomplished director and choreographer. In addition to working for major opera houses in the United State and Europe, she has choreographed shows on and off Broadway, and in London’s West End. Among the world premieres she has directed are Der Kaiser von Atlantis, by Viktor Ullmann, and The Life and Times of Malcolm X and Wakonda’s Dream, both by Anthony Davis. In Cape Town she directed the South African premier of Porgy and Bess in 1996, and she premiered the New York City Opera productions of Janacek’s From the House of the Dead, Zimmermann’s Die Soldaten, and Adamo’s Little Women. Levine has taught acting and improvisation at the Yale School of Drama, the Curtis Institute of Music, and Northwestern University, and is currently on the faculty of the Manhattan School of Music and the Mannes College of Music. She lives in New York, where she is the artistic director of the city’s only improvisational opera company, Play It by Ear.

Edward Gorey (1925–2000) was born in Chicago. He studied briefly at the Art Institute of Chicago, spent three years in the army testing poison gas, and attended Harvard College, where he majored in French literature and roomed with the poet Frank O’Hara. In 1953 Gorey published The Unstrung Harp, the first of his many extraordinary books, which include The Curious Sofa, The Haunted Tea-Cosy, and The Epiplectic Bicycle.

In addition to illustrating his own books, Edward Gorey provided drawings to countless books for both children and adults. Of these, New York Review Books has published The Haunted Looking Glass, a collection of Gothic tales that he selected and illustrated; The War of the Worlds by H. G. Wells; Men and Gods, a retelling of ancient Greek myths by Rex Warner; in collaboration with Rhoda Levine, Three Ladies Beside the Sea and He Was There from the Day We Moved In; and The Unrest-Cure and Other Stories, a collection of tales by Saki.

Praise For He Was There From the Day We Moved In…

Praise for He Was There the Day We Moved In:

“Gentle color washes over Edward Gorey’s illustrations of spindly boys and shaggy dog and skies. They set just the right note for this story that achieves a sensitive equilibrium of pathos and humor, a total effect that is sentimental without apology and optimistic without reason.” – The New York Times

“Edward Gorey’s work is remarkable and mysterious. I find it fascinating.” – Max Ernst

“I like to return to Edward Gorey’s works…he really is becoming a master.” – Edmund Wilson

“One of the most original artistic and literary minds in late 20th century America.” –The Los Angeles Times