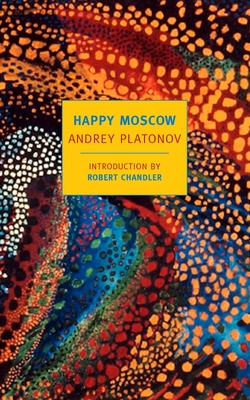 Moscow Chestnova is a bold and glamorous girl, a beautiful parachutist who grew up with the Revolution. As an orphan, she knew tough times—but things are changing now. Comrade Stalin has proclaimed that “Life has become better! Life has become merrier!” and Moscow herself is poised to join the Soviet elite. But her ambitions are thwarted when a freak accident propels her flaming from the sky. A new, stranger life begins. Moscow drifts from man to man, through dance halls, all-night diners, and laboratories in which the secret of immortality is actively being investigated, exploring the endless avenues and vacant spaces of the great city whose name she bears, looking for happiness, somewhere, still.

Unpublishable during Platonov’s lifetime, Happy Moscow first appeared in Russian only in 1991. This new edition contains not only a revised translation of Happy Moscow but several related works: a screenplay, a prescient essay about ecological catastrophe, and two short stories in which same characters reappear and the reader sees the mind of an extraordinary writer at work.

Andrey Platonovich Platonov (1899–1951) was the son of a railway worker. The eldest of eleven children, he began work at the age of thirteen, eventually becoming an engine driver’s assistant. He began publishing poems and articles in 1918, while studying engineering. Throughout much of the Twenties Platonov worked as a land reclamation expert, draining swamps, digging wells, and also building three small power stations. Between 1927 and 1932 he wrote his most politically controversial works, some of them first published in the Soviet Union only in the late 1980s. Other stories were published but subjected to vicious criticism. Stalin is reputed to have written “scum” in the margin of the story “For Future Use,” and to have said to Alexander Fadeyev (later Secretary of the Writers’ Union), “Give him a good belting—for future use!” During the Thirties Platonov made several public confessions of error, but went on writing stories only marginally more acceptable to the authorities. His son was sent to the Gulag in 1938, aged fifteen; he was released three years later, only to die of the tuberculosis he had contracted there. From September 1942, after being recommended to the chief editor of Red Star by his friend Vasily Grossman, Platonov worked as a war correspondent and managed to publish several volumes of stories; after the war, however, he was again almost unable to publish. He died in 1951, of tuberculosis caught from his son. Happy Moscow, one of his finest short novels, was first published in 1991; a complete text of Soul was first published only in 1999; letters, notebook entries, and unfinished stories continue to appear.

Robert chandler’s translations of Sappho and Guillaume Apollinaire are published in the series “Everyman’s Poetry.” His translations from Russian include Vasily Grossman’s Life and Fate, Leskov’s Lady Macbeth of Mtsensk and Aleksander Pushkin’s Dubrovsky and The Captain’s Daughter. Together with his wife, Elizabeth, and other colleagues he has  co-translated numerous works by Andrey Platonov. One of these, Soul, was chosen in 2004 as “best translation of the year from a Slavonic language” by the AAT SEEL (the American Association of Teachers of Slavonic and East European Languages); it was also shortlisted for the 2005 Rossica Translation Prize and the Weidenfeld European Translation Prize. Robert Chandler’s translation of Hamid Ismailov’s The Railway won the AAT SEEL prize for 2007 and received a special commendation from the judges of the 2007 Rossica Translation Prize. Robert Chandler is the editor of Russian Short Stories from Pushkin to Buida and Russian Magic Tales from Pushkin to Platonov and the author of a biography of Alexander Pushkin.

Elizabeth Chandler is a co-translator of Platonov’s Soul and The Foundation Pit, of Grossman's Everything Flows and The Road, and of Pushkin’s The Captain’s Daughter.

"I squint back on our century and I see six writers I think it will be remembered for.  They are Marcel Proust, Franz Kafka, Robert Musil, William Faulkner, Andrey Platonov and Samuel Beckett.... They are summits in the literary landscape of our century ... What's more, they don't lose an inch of their status when compared to the giants of fiction from the previous century."—Joseph Brodsky

“Andrey Platonov is the most exciting Russian writer to be rediscovered since the end of the Soviet Union. Happy Moscow shows Platonov as a master of language, weaving out of official names, political speeches, ideological exhortations and popular philosophical hopes a reality equal to the gut feel of Soviet life in the 1930s….Happy Moscow remains an extraordinary read, because politics doesn't get in the way. This is just what it felt like to be swept away by the Soviet ideal of a new humanity.” —The Independent

“Happy Moscow is worth reading on countless scores. On the violence, often not physical, which a totalitarian system wreaks on the lives of those who exist within it, it is a vital counterpart to those works which deal with the more tangible horrors of the USSR, and a reminder of the unique, paradoxical power of literature to expose the mismatch between rhetoric and reality.” —The Spectator

“In the Thirties Stalin proclaimed Moscow a paradise. This savage satire shows the truth through the eyes of the ebullient Moscow Chestnova. In Platonov's hands she becomes a parody of a superwoman who leaves a career in aeronautics for lovers and life. Around her is a fascinating cast of characters and, even in translation, Platonov's prose is extraordinary. This first English edition brings one of Russia's great writers to light.” —The Times (London)

“Translated with what appears scrupulous imagination by Robert Chandler, Happy Moscow is stirringly readable, taking the air from totalitarian bombast and breathing new life into a neglected classic.” —The Observer

“Happy Moscow is a full-blown masterpiece, worthy not only of consideration alongside its author’s better-known works, but of comparison with modernist fiction’s greatest achievements.” —Tony Wood, New Left Review

“[Joseph Brodsky] identified Platonov as the only Russian writer capable of philosophically and stylistically transcending the tragedy of the twentieth century. Chandler’s exemplary translations are based on reliable texts, and yield the fruit of their long-standing collaboration with Russian and English speaking Platonov scholars.” —The Times Literary Supplement
or
Not Currently Available for Direct Purchase
Copyright © 2020 American Booksellers Association