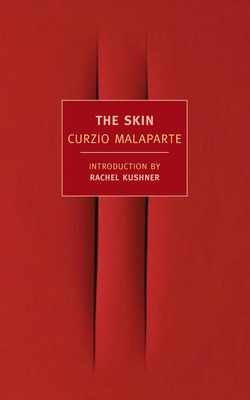 This is the first unexpurgated English edition of Curzio Malaparte’s legendary work The Skin. The book begins in 1943, with Allied forces cementing their grip on the devastated city of Naples. The sometime Fascist and ever-resourceful Curzio Malaparte is working with the Americans as a liaison officer. He looks after Colonel Jack Hamilton, “a Christian gentleman . . . an American in the noblest sense of the word,” who speaks French and cites the classics and holds his nose as the two men tour the squalid streets of a city in ruins where liberation is only another word for desperation. Veterans of the disbanded Italian army beg for work. A rare specimen from the city’s famous aquarium is served up at a ceremonial dinner for high Allied officers. Prostitution is rampant. The smell of death is everywhere.

Subtle, cynical, evasive, manipulative, unnerving, always astonishing, Malaparte is a supreme artist of the unreliable, both the product and the prophet of a world gone rotten to the core.

Praise For The Skin…

“An embodiment of Europe’s bad conscience, Malaparte’s voice was one that right-thinking people of every denomination preferred not to hear. That is why this difficult book was so hated and condemned when it first appeared, and remains so well worth reading.” —The New Statesman

“The sordid underclass of the town possess a lust for life and a will to live, and the unbearable becomes bearable - even magnified - for the reader in this beautiful homage to his hometown which Malaparte tinges with the absurd and black humor.” —Vogue Paris

“In The Skin the war is not yet over, but its conclusion is already decided. The bombs are still falling, but falling now on a different Europe. Yesterday no one had to ask who was the executioner and who the victim. Now, suddenly, good and evil have veiled their faces; the new world is still barely known . . . the person telling the tale is sure of only one thing: he is certain he can be certain of nothing. His ignorance becomes wisdom.” —Milan Kundera

“Malaparte enlarged the art of fiction in more perverse, inventive and darkly liberating ways than one would imagine possible, long before novelists like Philip Roth, Robert Coover, and E. L. Doctorow began using their own and other people’s histories as Play-Doh.” —Gary Indiana

“A skilled guide to the lowest depths of Europe’s inferno.” —Adrian Lyttelton, The Times Literary Supplement

“A scrupulous reporter? Probably not. One of the most remarkable writers of the 20th century? Certainly.” —Ian Buruma

Malaparte enlarged the art of fiction in more perverse, inventive and darkly liberating ways than one would imagine possible, long before novelists like Philip Roth, Robert Coover, and E. L. Doctorow began using their own and other people’s histories as Play-Doh.
—Gary Indiana

Curzio Malaparte (pseudonym of Kurt Eric Suckert, 1898–1957) was born in Prato, Italy, and served in World War I. An early supporter of the Italian Fascist movement and a prolific journalist, Malaparte soon established himself as an outspoken public figure. In 1931 he incurred Mussolini’s displeasure by publishing a how-to manual entitled Technique of the Coup-d’Etat, which led to his arrest and a brief term in prison. During World War II Malaparte worked as a correspondent, for much of the time on the eastern front, and this experience provided the basis for his two most famous books, Kaputt (1944; available as an NYRB classic) and The Skin (1949). His political sympathies veered to the left after the war. He continued to write, while also involving himself in the theater and the cinema.

David Moore’s translations include Flora Volpini’s The Women of Florence, Dino Alfieri’s Dictators Face to Face, and Malaparte’s The Volga Rises in Europe.

Rachel Kushner is the author of the novels The Flamethrowers (2013) and Telex from Cuba (2008), which was a finalist for the National Book Award and a New York Times Notable Book. Her fiction and essays have appeared in The New York Times, The Paris Review, The Believer, Artforum, and Bookforum. She is a 2013 Guggenheim Fellow.
Loading...
or support indie stores by buying on
(This book is on backorder)