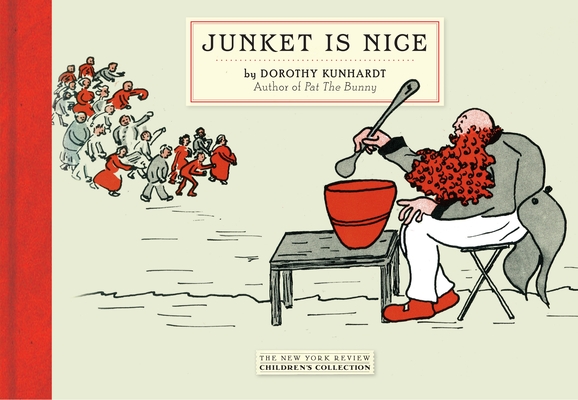 Junket is a delicious custard and a lovely dessert.

But why is the old man with a red beard and red slippers eating such an enormous bowl of junket, and what could he possibly be thinking about while he feasts?

That’s a good question! And one that the old man poses to the crowds and crowds of people that gather to watch him. In fact, almost everyone in the whole world wants to know the answer to this riddle.

And only one little boy has the answer.

This ingenious book of inspired nonsense was the very first from Dorothy Kunhardt, whose Pat the Bunny has delighted generations of young children.

Dorothy Meserve Kunhardt (1901–1979) was an American author of books for small children and is best known for Pat the Bunny (1940), one of the all-time best-selling children’s books in the United States. Her first book, Junket Is Nice, was a success when it appeared in 1933 and was followed by Now Open the Box (forthcoming from The New York Review Children’s Collection), Lucky Mrs. Ticklefeather, Brave Mr. Buckingham, and Tiny Animal Stories. Kunhardt published nearly fifty books, including several nonfiction works for adults about Abraham Lincoln and the Civil War (her father amassed a legendary collection of Civil War–era photographs and memorabilia). Several years after her death, Philip B. Kunhardt Jr. remembered his mother’s boundless curiosity and appreciation for the way young people observe the world, writing in The New York Times that “for Dorothy Kunhardt a children’s book was nothing more or less than a way to talk to children.”

Praise For Junket Is Nice…

“Illustrated in simple black and reds and written in what appears to be handwritten letters, it’s a delightful and simple book and readers will love finding the answer to the riddle.” —San Francisco Book Review

“A rare book of irresistible nonsense . . .” —The New York Times

"A nonsense picture book with a guessing element in it and the repetition children love."  - Kirkus Reviews

“For Dorothy Kunhardt, a children's book was nothing more or less than a way to talk to children. And if along the way the pages of the book had to float in a bath, had to squeak, had to bounce, had to light up, had to change color, had to feel furry or be in the shape of a snake or an elephant for feeling under the covers, if the book had to have a lock on it, a hole through it, a smell all its own, even if the book had to be eaten, that was O.K.—because that was all part of the delight.” —Philip B. Kunhardt, Jr., The New York Times

". . . noble nonsense that, like Lear's, could be at once ridiculous and poignant." —Barbara Bader, American Picture Books