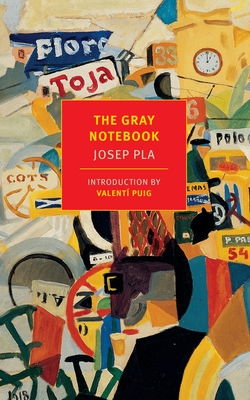 Josep Pla’s masterpiece, The Gray Notebook, is one of the most colorful and unusual works in modern literature. In 1918, when Pla was in Barcelona studying law, the Spanish flu broke out, the university shut down, and he went home to his parents in coastal Palafrugell. Aspiring to be a writer, not a lawyer, he resolved to hone his style by keeping a journal. In it he wrote about his family, local characters, visits to cafés; the quips, quarrels, ambitions, and amours of his friends; writers he liked and writers he didn’t; and the long contemplative walks he would take in the countryside under magnificent skies. Returning to Barcelona to complete his studies, Pla kept up his diary, scrutinizing life in the big city with the same unflagging zest and humor.

Pla, one of the great Catalan writers, held on to this youthful journal for close to fifty years, reworking and adding to it, until he finally published The Gray Notebook as both the first volume and the capstone of his collected works. It is a beautiful, entrancing, delightful book—at once a distillation of the spirit of youth and the work of a lifetime.

Praise For The Gray Notebook…

“Josep Pla was a great noticer of things and places; his gaze was alert and dry; he wrote in a style which registered both the smallest detail and the large picture. His relationship to Catalan identity and Spanish history was complex, often ambiguous. His relationship, however, to the scene in front of him, or the days in which he lived, remains fascinating for its clarity, its sharpness, its originality and its wit. On display in his work is a glittering and sparkling sensibility.” —Colm Tóibín

“Considered one of the most influential Catalan authors of the twentieth century, [Pla] was born and raised in the Empordà, and over the course of his life wrote over 30,000 pages of prose in which he diligently catalogued the landscape and the life and habits of the people of the region. His complete works, published and republished over the years, contain marvelous descriptive passages that capture the landscape’s history and its complex topography at once.” —Words Without Borders

“Josep Pla has long been considered one of the finest writers of autobiographical texts in any of the languages of Spain.” —Hispanic Review

“Pla seems to enjoy an almost constant series of presence effects in plays of light and shadows, expressions on faces, turns of phrase, the direction of the wind. His own encounters with presence are what illuminate the communicative potential that the landscape holds, if we approach it the right way.” —Romance Quarterly

“Born in Palafrugell, Josep Pla was a popular journalist who traveled widely to report on world events. His politics, conservative yet liberal, joined with an ironic skepticism that did not endear him to Catalan leftists and nationalists. Yet by the end of his life he was recognized as the most distinguished prose stylist in Catalan. His devotion to writing is evident in his collected works, which fill forty-six volumes. The Gray Notebook is a diary from 1918–19 that Pla revised over many decades.” —World Literature Today

“The grand old man of Catalan letters and one of Spain’s most prolific writers.” —Chicago Tribune

Pla (1897-1981) is considered one of the greatest writers of Catalan language, and this beautiful translation lets English readers glory in the quiet strength of his words. At age 21, the author decided to change his style of writing—a little less flowery but not quite journalistic—and he began this diary, which begs to be read slowly, calmly and multiple times....A classic. Readers who travel to the Costa Brava will truly feel what Pla has written.
—Kirkus Reviews

Josep Pla (1897–1981), the eldest of four children, was born in Palafrugell on the Costa Brava to a family of landowners. He studied law in Barcelona, abandoned law for journalism, and in 1920 moved to Paris to serve as the correspondent for the Spanish newspaper La Publicidad. Banned from Spain in 1924 for his criticisms of the dictator Primo de Rivera, Pla continued to report from Russia, Rome, Berlin, and London, before returning to Madrid in 1927. He supported the new Spanish Republic that emerged in 1931, but was soon disillusioned and left the country during the Civil War, returning in 1939. Under the Franco regime, he was internally exiled to Palafrugell and his articles for the weekly review Destino were frequently censored. After 1947 his work began to be published in Catalan, and his complete works were published in full in 1966. They comprise forty-five volumes, of which The Gray Notebook—begun in 1919, but polished and added to throughout the intervening years—is the first.

Peter Bush is an award-winning translator who lives in Barcelona. Among his recent translations are Ramón del Valle-Inclan’s Tyrant Banderas (for NYRB Classics), Teresa Solana’s Crazy Tales of Blood and Guts, Mercè Rodoreda’s In Diamond Square and Najat El Hachmi’s The Body Hunter.

Valentí Puig is a Catalan poet, novelist, and literary critic who writes in both his native Catalan and in Spanish.
Loading...
or
Not Currently Available for Direct Purchase