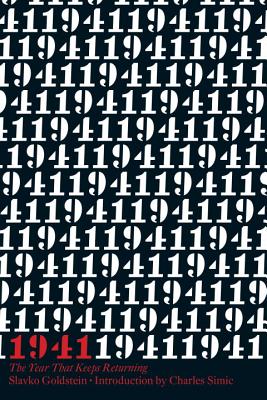 The Year That Keeps Returning

The distinguished Croatian journalist and publisher Slavko Goldstein says, “Writing this book about my family, I have tried not to separate what happened to us from the fates of many other people and of an entire country.” 1941: The Year That Keeps Returning is Goldstein’s astonishing historical memoir of that fateful year—when the Ustasha, the pro-fascist nationalists, were brought to power in Croatia by the Nazi occupiers of Yugoslavia. On April 10, when the German troops marched into Zagreb, the Croatian capital, they were greeted as liberators by the Croats. Three days later, Ante Pavelić, the future leader of the Independent State of Croatia, returned from exile in Italy and Goldstein’s father, the proprietor of a leftist bookstore in Karlovac—a beautiful old city fifty miles from the capital—was arrested along with other local Serbs, communists, and Yugoslav sympathizers. Goldstein was only thirteen years old, and he would never see his father again.

More than fifty years later, Goldstein seeks to piece together the facts of his father’s last days. The moving narrative threads stories of family, friends, and other ordinary people who lived through those dark times together with personal memories and an impressive depth of carefully researched historic details. The other central figure in Goldstein’s heartrending tale is his mother—a strong, resourceful woman who understands how to act decisively in a time of terror in order to keep her family alive.

From 1941 through 1945 some 32,000 Jews, 40,000 Gypsies, and 350,000 Serbs were slaughtered in Croatia. It is a period in history that is often forgotten, purged, or erased from the history books, which makes Goldstein’s vivid, carefully balanced account so important for us today—for the same atrocities returned to Croatia and Bosnia in the 1990s. And yet Goldstein’s story isn’t confined by geographical boundaries as it speaks to the dangers and madness of ethnic hatred all over the world and the urgent need for mutual understanding.

Praise For 1941: The Year That Keeps Returning…

"A chilling personal account of the deep-seated terror and ethnic violence underpinning the pub bet stage of Croatia during World War II… A stunning work that looks frankly at the ‘roots of evil'.”  —Kirkus Reviews

"In this ambitious mix of history and memoir, Goldstein, a Croatian writer, looks back at WWII and its effects on his life, family, and neighbors….Goldstein covers a lot of territory as he explores the vicious ethnic warfare between Serbs and Croats from 1941 onward and looks at how the Nazi pogrom further affected his country’s Jewish community….It’s a poignant, uncompromising recollection, told in a meandering but easy-to-follow manner…. Goldstein’s book, reconstructed through personal experience as well as numerous interviews and historical documents provides invaluable insight into Croatia during WWII." —Publishers Weekly

“I came across this remarkable book, which has not yet been translated into English, while writing recently about the wars in the former Yugoslavia in the 1990s. It deserves attention because it explains, perhaps better than any book I know of, how different ethnic groups, who lived side by side in peace for centuries, were made to turn against one another and become each other’s executioners in that unhappy country.” —Charles Simic

“Here at last is a memoir whose author readily admits that his childhood recollections are not necessarily crystal clear, but who has made up for the inevitable obscurities with assiduous research and thorough interviews so as to rank it among the greatest writings on the witches’ cauldron that was Hitler’s Europe in 1941. The focus is on Croatia where, under the command of the satanic Ustasha fascists, neighbors denounced, robbed, and killed neighbors, but Slavko Goldstein’s 1941 could be applied to every country where war and foreign occupation turned hitherto harmless people into bandits.” —István Deák, Seth Low Professor Emeritus of History, Columbia University

“Goldstein, 63, keeps up a formidable pace. Besides editing Erasmus and directing its parent research institute, the Erasmus Guild, he heads an independent publishing house, sits on the council of the Zagreb Jewish Community, and appears frequently on local television and radio programs. In a sense, Goldstein’s activism dates back to 1941, the year the Nazis invaded Yugoslavia and installed a puppet regime, the Ustasha, to run Croatia for them.” —The Jerusalem Report

“Goldstein’s book is at once autobiography and family chronicle, a testimonial and a historical record, a work of literature. Simply, lucidly, it recounts the private life of a family and the public life of a city, the reign of the Independent State of Croatia and World War II, the suffering and the camps, and the postwar tragedies that mirror the past.” —Zarez (Croatia)

“Based on personal memories and historical research, Goldstein has spun—as if from coils of yarn of good and evil—a singular history of twentieth-century tragedies.” —Novi List (Croatia)

Award-winning publisher, editor, and author Slavko Goldstein was born in 1928 in Sarajevo, Bosnia and Hercegovina, and grew up in Karlovac, Croatia. During the Holocaust, he lost his father and most of the members of his father's and mother's families. His mother saved him and his brother Danko by joining the Partisans in 1942, in which he served until 1945, achieving the rank of lieutenant at the age of seventeen and becoming one of the youngest officers in the Partisan army. After the war, he worked as a journalist and editor for several leading Croatian newspapers and as a scriptwriter for feature and documentary films. As the director of University Publisher Liber Zageb and then as the publisher and editor of Novi Liber for more than forty years, he has been responsible for the publication of  many important works of Yugoslav and Croatian literature and on Croatian social life. He was president of the Jewish Community of Zagreb from 1986-1990 and the founder and president of the first non-communist political party in Croatia from 1989-1990. From 2001 to 2005 he was the president of the Council of the Jasenovac Memorial Center. He has been awarded about twenty prizes for his journalistic, film, and editorial work. The Croatian edition of his latest book, 1941: The Year that Keeps Returning, won four different prizes as the best publication in Croatia in 2007, and the Krunoslav Sukić Award as the book of the decade in the field of nonviolence, human rights, and civil society.

Charles Simic is a poet, essayist, and translator. He has published some twenty collections of poetry, six books of essays, a memoir, and numerous translations. He is the recipient of many awards, including the Pulitzer Prize, the Griffin Prize, and a MacArthur Fellowship. Simic’s recent works include Voice at 3 a.m., a selection of later and new poems; Master of Disguises, new poems; and Confessions of a Poet Laureate, a collection of short essays that was published by New York Review Books as an e-book original. In 2007 Simic was appointed the fifteenth Poet Laureate Consultant in Poetry to the Library of Congress. His book Dime-Store Alchemy: The Art of Joseph Cornell was published by New York Review Books in 2011.

Michael Gable was born in Barberton, Ohio in 1952.  After serving in the US Navy, he graduated from the School of International Service of The American University in Washington, D.C. in 1979. He worked for US government and international humanitarian agencies in the countries of the former Yugoslavia between 1987 and 2005. He now resides in Zagreb, Croatia.
or
Not Currently Available for Direct Purchase