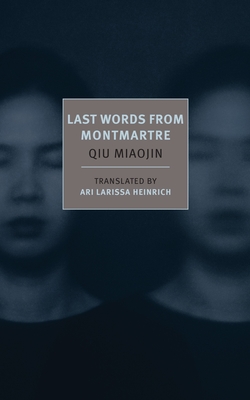 When the pioneering Taiwanese novelist Qiu Miaojin committed suicide in 1995 at age twenty-six, she left behind her unpublished masterpiece, Last Words from Montmartre. Unfolding through a series of letters written by an unnamed narrator, Last Words tells the story of a passionate relationship between two young women—their sexual awakening, their gradual breakup, and the devastating aftermath of their broken love. In a style that veers between extremes, from self-deprecation to pathos, compulsive repetition to rhapsodic musings, reticence to vulnerability, Qiu’s genre-bending novel is at once a psychological thriller, a sublime romance, and the author’s own suicide note.

The letters (which, Qiu tells us, can be read in any order) leap between Paris, Taipei, and Tokyo. They display wrenching insights into what it means to live between cultures, languages, and genders—until the genderless character Zoë appears, and the narrator’s spiritual and physical identity is transformed. As powerfully raw and transcendent as Mishima’s Confessions of a Mask, Goethe’s The Sorrows of Young Werther, and Theresa Cha’s Dictée, to name but a few, Last Words from Montmartre proves Qiu Miaojin to be one of the finest experimentalists and modernist Chinese-language writers of our generation.

Praise For Last Words from Montmartre…

"I’d put Last Words in a category that includes much of Kathy Acker and Henry Miller. Stein, too...It’s a deeply personal text. Yet it bears reading and rereading an abundance of times."—Eileen Myles, Bookforum

"Qiu’s voice, both colloquial and metaphysical, enchants.... It would be wrong to interpret the book’s—or, for that matter, the author’s—ultimate surrender to death as a rejection of the richness of life; rather, like Goethe’s young Werther, this 'last testament' (an alternative translation of the title) affirms the power of literature." —Publishers Weekly

“Last Words from Montmartre is deeply, soulfully moving in its excruciating revelation of the author’s innermost self, which is after all what makes the magic of literature. I felt a secret intimacy with Qiu Miaojin from the first page.” —Wang Dan

“Qiu Miaojin...had an exceptional talent. Her voice is assertive, intellectual, witty, lyrical, and intimate. Several years after her death, her works continue to command a huge following.” —Tze-lan Deborah Sang

“What makes Kerouac or Salinger timeless is not necessarily literary, but perhaps didactic: the fact that there is wisdom to be found at the fountain of youth, no matter what time one arrives. Of course, there is also a saintliness reserved for those authors who are able to make an interesting life story for themselves, and that order includes Qiu Miaojin.” —Bonnie Huie, PEN America blog

"In Last Words from Montmartre, selves and emotions hurtle through time and space with terrifying force — both destructive and productive — and ecstasy and pain exist in very close proximity.” —FullStop

“Last Words from Montmartre [is] intense, brutal and beautiful. A love letter and a suicide note." —The Rumblr

“Few writers use the confession and aphorism as purely and effectively as Qiu, whose poetry offers a distinct type of clarity; Last Words from Montmartre achieves a profoundly intimate portrait of an individual whose life unravels before us.” —Jenn Mar, Rain Taxi

"Ari Larissa Heinrich’s translation is so skillful because he is able to understand Qiu as an artist, including all her tiny nuances, and her importance as an artistic figure…This is a novel of passion: the passion to love, to understand, to know, to express, to connect, to live and to die with reason...As readers, when a writer lays bare for us with such brutal honesty, truth will always be what we see…This isn’t a book of love letters or a book of suicide notes; its a testament to the power of artistic courage in the face of pain, misery and isolation." —Monica Carter, Three Percent

“Thanks to Heinrich's skill and judgment, Qiu’s passion is as overwhelming and relentless a force in translation as in the original. Qiu’s prose strikes the reader like a tsunami: waters of an unassuming height slowly but assuredly surge onto the land until they fill every room and take every object not nailed down. This is not simply passion, but what the Chinese call qing, which is passion as a full-blown aesthetic ideology. For those overcome by it, qing becomes the sine qua non of existing in the world. To quote the preface of the sixteenth-century play The Peony Pavilion, qing can cause “the living to die, and the dead to live again.” — Dylan Suher, Asymptote

“Echoing W. B. Yeat’s formulation, ‘only an aching heart/ Creates a changeless work of art”, the narrator believes that greatness is only achieved ‘if the artist has suffered through profound tragedy and death”.  We must thank Qiu’s skilful translator, Ari Larissa Heinrich, for bringing this study of anguish from the Chinese to the English.  ‘Only a spirit of artistic sincerity can console the souls of humankind’, writes the narrator as her suicide nears.  Readers of Last Words from Montmartre may agree.  But who will console the artist?”  — Michael LaPointe,
Times Literary Supplement

“The chaos of the book’s construction is part of its intimacy, giving the reader access to memories as the narrator recalls them, to snippets of conversations as the narrator remembers them. It is also a reminder of the artifices of fiction…Last Words is not just an epistolary novel but a collage in progress. It is the narrator trying to make us understand her own waxing and waning passions for various women and for her art, all while being honest about the fact that these ‘letters’ were deliberately written and organized to make the reader feel prolonged distress or flashes of joy.” — Shan Wang, Harvard Review

“I'm truly inspired by Qiu Miaojin. . . We often don't think of the immigrant having, or the immigrant story having a sex life, a love life, a life of depression and deep existential angst. And Miaojin really positions an immigrant narrative in an existential wonder. . . [In Last Words from Montmartre] immigrants are not victims who are trying to get by, they are active agents in their own life.” —Ocean Vuong, NPR

Qiu Miaojin (1969–1995)—one of Taiwan’s most innovative literary modernists, and the country’s most renowned lesbian writer—was born in Chuanghua County in western Taiwan. She graduated with a degree in psychology from National Taiwan University and pursued graduate studies in clinical psychology at the University of Paris VIII . Her first published story, “Prisoner,” received the Central Daily News Short Story Prize, and her novella Lonely Crowds won the United Literature Association Award. While in Paris, she directed a thirty-minute film called Ghost Carnival, and not long after this, at the age of twenty-six, she committed suicide. The posthumous publications of her novels Last Words from Montmartre and Notes of a Crocodile (forthcoming from NYRB Classics) made her into one of the most revered countercultural icons in Chinese letters. After her death in 1995, she was given the China Times Honorary Prize for Literature. In 2007, a two-volume edition of her Diaries was published.

Ari Larissa Heinrich received a master’s in Chinese literature from Harvard and a PhD in Chinese studies from the University of California at Berkeley. Heinrich and Qiu—who would have been the same age if Qiu were still alive—crossed paths without knowing each other in Taipei and in Paris. He is the author of The Afterlife of Images: Translating the Pathological Body Between China and the West and the coeditor of Queer Sinophone Cultures. He teaches at the University of California at San Diego.
Loading...
or support indie stores by buying on