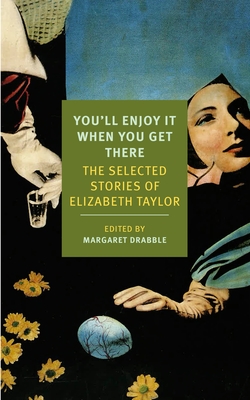 You'll Enjoy It When You Get There (Paperback)

The Stories of Elizabeth Taylor

Elizabeth Taylor is finally beginning to gain the recognition due to her as one of the best English writers of the postwar period, prized and praised by Sarah Waters and Hilary Mantel, among others. Inheriting Ivy Compton-Burnett’s uncanny sensitivity to the terrifying undercurrents that swirl beneath the apparent calm of respectable family life while showing a deep sympathy of her own for human loneliness, Taylor depicted dislocation with the unflinching presence of mind of Graham Greene. But for Taylor, unlike Greene, dislocation began not in distant climes but right at home. It is in the living room, playroom, and bedroom that Taylor stages her unforgettable dramas of alienation and impossible desire.

Taylor’s stories, many of which originally appeared in The New Yorker, are her central achievement. Here are self-improving spinsters and gossiping girls, war orphans and wallflowers, honeymooners and barmaids, mistresses and murderers. Margaret Drabble’s new selection reveals a writer whose wide sympathies and restless curiosity are matched by a steely penetration into the human heart and mind.

Elizabeth Taylor (1912–1975) was born into a middle-class family in Berkshire, England. She held a variety of positions, including librarian and governess, before marrying a businessman in 1936. Nine years later, her first novel, At Mrs. Lippincote’s, appeared. She would go on to publish eleven more novels, including Angel and A Game of Hide and Seek (both available as NYRB Classics), four collections of short stories (many of which originally appeared in The New Yorker, Harper’s, and other magazines), and a children’s book, Mossy Trotter, while living with her husband and two children in Buckingham­shire. Long championed  by Ivy Compton-Burnett, Barbara Pym, Robert Liddell, Kingsley Amis, and Elizabeth Jane Howard, Taylor’s novels and stories have been the basis for a number of films, including Mrs. Palfrey at the Claremont (2005), starring Joan Plowright, and François Ozon’s Angel (2007).

Margaret Drabble is the author of eighteen novels, including The Needle’s Eye, The Peppered Moth, The Seven Sisters, The Sea Lady, and most recently, The Pure Gold Baby. Among her works of nonfiction are biographies of Arnold Bennett and Angus Wilson. She has edited the fifth and sixth editions of the Oxford Companion to World Literature and was made a Dame of the British Empire in 2008.

Praise For You'll Enjoy It When You Get There: The Stories of Elizabeth Taylor…

“For years, Taylor’s short stories—painfully smart,  hilarious, dark—have been entirely out of print in the United States.” —Britt Peterson, The New Republic

“I find the writing of Elizabeth Taylor fresh, and inevitably hitting the right nail on the head in every sentence. In fact I find her so unbelievably good, kind, stimulating, catty and subtle that I forget I’m a critic.” —John Betjeman

“The short story [is] a form in which Taylor, a gimlet-eyed miniaturist, fully exploited her talents.” —Benjamin Schwarz, The Atlantic

“Taylor’s stories, like her novels, are also filled with interesting and original ideas about life that are presented with almost no emphasis, ideas that other novelists would practically underscore and print in bold.” —Financial Times

"Taylor was ahead of her time in so many ways. She wrote about women’s lives with a keen eye for what goes on beneath the surface and behind the curtains.” —The Booklist Reader

“In all the stories there is a peculiarly satisfying mixture of wit and generosity. Their human depth is such that they can be read again and again.” —Margaret Drabble

“Her stories remain with one, indelibly, as though they had been some turning point in one’s own experience.” —Elizabeth Bowen

“There is a deceptive smoothness in her tone, or tone of voice, as in that of Evelyn Waugh; not a far-fetched comparison, for in the work of both writers the funny and the appalling lie side by side in close amity.” —Kingsley Amis
or support indie stores by buying on
(This book is on backorder)
Copyright © 2020 American Booksellers Association