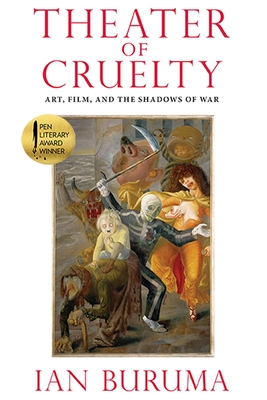 Art, Film, and the Shadows of War

Winner of the PEN/Diamonstein-Spielvogel Award for the Art of the Essay.

Ian Buruma is fascinated, he writes, “by what makes the human species behave atrociously.” In Theater of Cruelty the acclaimed author of The Wages of Guilt and Year Zero: A History of 1945 once again turns to World War II to explore that question—to the Nazi occupation of Paris, the Allied bombing of German cities, the international controversies over Anne Frank’s diaries, Japan’s militarist intellectuals and its kamikaze pilots.

One way that people respond to power and cruelty, Buruma argues, is through art, and the art that most interests him reveals the dark impulses beneath the veneer of civilized behavior. This is what draws him to German and Japanese artists such as Max Beckmann, George Grosz, Ernst Ludwig Kirchner, Mishima Yukio, and Yokoo Tadanori, as well as to filmmakers such as Werner Herzog, Rainer Werner Fassbinder, Kurosawa Kiyoshi, and Hans-Jürgen Syberberg. All were affected by fascism and its terrible consequences; all “looked into the abyss and made art of what they saw.”

Whether he is writing in this wide-ranging collection about war, artists, or film—or about David Bowie’s music, R. Crumb’s drawings, the Palestinians of the West Bank, or Asian theme parks—Ian Buruma brings sympathetic historical insight and shrewd aesthetic judgment to understanding the diverse ways that people deal with violence and cruelty in life and in art.

Praise For Theater of Cruelty: Art, Film, and the Shadows of War…

“Buruma is enthusiastic and skeptical and unapologetic about his diverse passions…Though he writes of those who leapt before they looked, as a critic, Buruma is always firmly grounded." —Booklist

“Able to write with apparent ease and grace about a wide variety of subjects...Buruma displays a generosity of spirit that is often absent in the work of other cultural critics.... The author generally focuses on strengths of artistic works and maintains a hopeful view of history, though he seems to find it increasingly hard to do so. A unique intelligence encounters the uniqueness of art and culture.” —Kirkus  (starred review)

“Year Zero has a down-to-earth grandeur. Through an array of brief, evocative human portraits and poignant descriptions of events around the globe he hints, rather than going into numbing detail or philosophical discourse, at the dimensions of suffering, the depth of moral confusion and in the end the nascent hope that 1945 entailed.” —The Wall Street Journal

“Mr. Buruma is a journalist who reports all sides: those of the survivors, the veterans, the politicians, the left-wing pacifists and right-wing nationalists, the judges and the judged. The Wages of Guilt is subtitled ‘Memories of War in Germany and Japan.’ But it is really far more, an exploration of the many and varied ways in which cataclysm has shaped national identity in our century.” —The New York Times

"As generations with few memories of the second world war come of age in Europe and Asia, this luminous book will remind them of the importance of what Buruma terms 'mental surgeons', the politicians and warriors who reconstructed two continents left in rubble." --The Financial Times

"Ian Buruma's wonderful book is about a time, immediately after the end of the war, which has somehow fallen between the cracks of history, and which the author has now devastatingly brought to light...This book is a compelling and astounding addition to the literature of the war, reminding us, as Buruma himself writes, 'Never Again'." --The Daily Mail

"Mr. Buruma's analysis is correct. Many of the consequences of victory were grim. Normality returned in the decades that followed thanks to the grit and determination of those who pushed on past the horrors of 1945. Mr. Buruma's book honours their efforts." --The Economist

"A stirring account of the year in which the world woke up to the horror of what had just occurred and--while some new horrors were being committed--began to reflect on how to make sure that it never happens again." --The New York Review of Books

Praise for Buruma’s The Wages of Guilt:

"Mr. Buruma is a journalist who reports all sides: those of the survivors, the veterans, the politicians, the left-wing pacifists and right-wing nationalists, the judges and the judged. The Wages of Guilt is subtitled 'Memories of War in Germany and Japan.' But it is really far more, an exploration of the many and varied ways in which cataclysm has shaped national identity in our century." --The New York Times

"This thought-provoking inquiry has a powerful theme: people must be held accountable for the society in which they live." --Publishers Weekly

"As in God's Dust (1989), Buruma takes a psychological and cultural voyage into nationalism, guilt, and self-delusion -- in this case, of two of WW II's defeated Axis powers....The book ranges wide and deep in its search for disparate voices in both [German and Japanese] societies: editors, intellectuals, writers, artists, activists. Buruma's easy familiarity with Japan enables him to dig under the skin of national attitudes in a way that is rare for a Western commentator....All in all, a thoughtful, patiently assembled book that probes carefully and with moral toughness into precisely those painful truths." --Kirkus Review

Ian Buruma is the author of many books, including The Wages of Guilt: Memories of War in Germany and Japan (1995), The Missionary and the Libertine: Love and War in East and West (1996), Murder in Amsterdam: The Death of Theo Van Gogh and the Limits of Tolerance (2006), and Year Zero: A History of 1945 (2013). He is the Paul W. Williams Professor of Human Rights and Journalism at Bard and a regular contributor to The New York Review of Books, The New Yorker, and The New York Times, among other publications.
Loading...
or
Not Currently Available for Direct Purchase