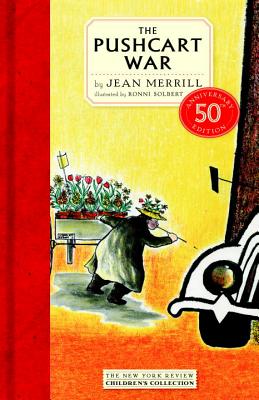 Do you know the history of the pushcart war? The REAL history? It’s a story of how regular people banded together and, armed with little more than their brains and good aim defeated a mighty foe.

The Pushcart War was first published fifty years ago. It has inspired generations of children and been adapted for television, radio, and the stage around the world. It was included on School Library Journal’s list of “One Hundred Books That Shaped the Twentieth Century,” and its assertion that a committed group of men and women can prevail against a powerful force is as relevant in the twenty-first century as it was in 1964.

“The Pushcart War had a profound impact on me; when I was a kid I devoured it several times, and I’ve carried it deep inside me ever since. The book gave me a point of entrance—my first, I imagine—into the world of resistance to political and economic injustice and chicanery. It made opposition, even non-violent civil disobedience, seem fun and right and necessary and heroic, and something even someone as powerless as a kid could and should undertake.” —Tony Kushner

“Finally, parents can get their hands on new copies of the best book about politics ever written for children…What makes The Pushcart War so wonderful is not simply its inventive premise or its deftly-sketched cast of characters…These elements alone would have made the book a great deal of fun, but Merrill accomplishes something greater. She manages to put together a plot that introduces children to almost every element of a political controversy…this lively, lovely novel is an argument for staying hopeful about the possibility of bringing about change, even when you are going up against entrenched and powerful interests.” —Alyssa Rosenberg, The Washington Post

“The definitive history of New York’s war between the pushcarts and the trucks is one of those rarities—a book that is both humorous and downright funny. Such a lively book will need little introducing; once a boy or girl discovers it, the news will spread.” —The Horn Book Magazine

“This is satire on almost every conceivable aspect of modern urban life...To all it should be funny, and to many it will have the disturbing ring of truth.” —School Library Journal, starred review

“An utterly captivating book...the satire cuts deep into some of our most hallowed institutions. Best of all, the dialogue and situations are irresistibly funny.” —The New York Times Book Review

"I’ve been reading Jean Merrill’s The Pushcart War (NYRB’s fiftieth anniversary edition) to my son every night, a few chapters at a time...In truth, I’m as excited as he is to read it. The tale of New York’s pushcart peddlers waging war against the monstrous, bullying trucks is droll—as are Ronni Solbert’s illustrations—but its message remains urgent; Merrill writes expansively, giving air to the intrigue, to the peddler’s personalities, and to what’s at stake for people who don’t have money or influence...[A]n entertaining lesson on nonviolent civil disobedience, standing up for the rights and the dignity of the little guy, and how to make a sturdy peashooter." —Nicole Rudick, The Paris Review

"This is one of the great children's classics, the tale of how a dispute between delivery truck drivers and pushcart vendors blossomed into full-scale armed conflict. Part of its charm is its old-New York quaintness, but the exciting story, set in the pressure-cooker of city traffic, is timeless.” —Sonja Bolle, Knoxville News

Jean Merrill (1923–2012) was born in Rochester, New York, and grew up on a dairy and apple farm near Lake Ontario. She received a master’s degree in English literature from Wellesley in 1945 and later studied folklore in India on a Fulbright fellowship. She worked for many years as an editor at Scholastic Magazine, Literary Cavalcade, and the publications department of Bank Street College before turning to writing full time. Her first book, Henry, the Hand-Painted Mouse, was published in 1951 and her last, The Girl Who Loved Caterpillars: A Twelfth-Century Tale from Japan, in 1992. In between she wrote some thirty books for young readers, including The Pushcart War (1964), The Elephant Who Liked to Smash Small Cars (1967; forthcoming from The New York Review Children’s Collection), and The Toothpaste Millionaire (1977).

Ronni Solbert (b. 1925) was born in Washington, D.C., and graduated from Vassar and the Cranbrook Academy of Art. As a Fullbright recipient she studied folk and tribal art in India. She has illustrated more than forty children’s books and written and illustrated three of her own. As a painter, sculptor, and photographer she has exhibited widely in the United States and abroad.
Loading...
or
Not Currently Available for Direct Purchase