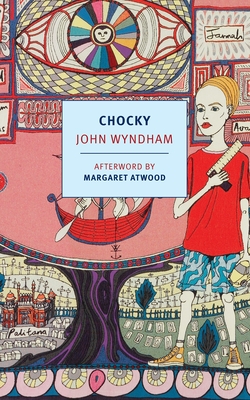 In Chocky, pioneering science-fiction master John Wyndham confronts an enigma as strange as anything found in his classic works The Day of the Triffids or The Chrysalids—the mind of a child.

It’s not terribly unusual for a boy to have an imaginary friend, but Matthew’s parents have to agree that his—nicknamed Chocky—is anything but ordinary. Why, Chocky demands to know, are there twenty-four hours in a day? Why are there two sexes? Why can’t Matthew solve his math homework using a logical system like binary code? When the questions Chocky asks become too advanced and, frankly, too odd for teachers to answer, Matthew’s  parents start to wonder if Chocky might be something far stranger than a figment of their son’s imagination.

Chocky, the last novel Wyndham published during his life, is a playful investigation of what being human is all about, delving into such matters as child-rearing, marriage, learning, artistic inspiration—and ending with a surprising and impassioned plea for better human stewardship of the earth.

John Wyndham is the pen name of John Wyndham Parkes Lucas Beynon Harris (1903–1969), the son of an English barrister. The boy’s parents separated when he was eight, and after attending various boarding schools, he lived off family money while trying his hand—unsuccessfully—at careers such as law, commercial illustration, and advertising. In 1924 he turned to writing, and within a number of years he was selling short stories, mostly science fiction, to pulp magazines in America, as John Beynon or John Beynon Harris. During World War II, he served behind the lines in the British army, and in 1951 he published The Day of the Triffids, his first novel as John Wyndham, to tremendous success. Wyndham’s six other novels include The Kraken Wakes and The Midwich Cuckoos, and The Chrysalids (published as an NYRB Classic).

Margaret Atwood is the author of more than forty books of fiction, poetry, and critical essays, including the 2000 Booker Prize–winning The Blind Assassin; Alias Grace, which won the Giller Prize and the Premio Mondello; The Robber Bride, Cat’s Eye, The Handmaid’s Tale, and The Penelopiad. Her latest work is a book of short stories called Stone Mattress: Nine Tales (2014).  Her newest novel, Madd­Addam (2013) is the third in a trilogy comprising The Year of the Flood (2009) and the Giller and Booker Prize–nominated Oryx and Crake (2003). Atwood lives in Toronto with the writer Graeme Gibson.

“Wyndham singlehandedly invented a whole pile of sub-genres of SF. It’s as if . . . in the 1950s he was plugged in to the world’s subconscious fears and articulated them one by one in short, amazingly readable novels.” —Jo Walton, Tor.com

“What John Wyndham does so brilliantly is invest quiet suburban streets with menace. The idea of an alien intelligence inhabiting a child is always frightening. But here Wyndham turns a story of ‘possession’ into a touching fable about our profligate use of the planet.”  —The Telegraph

“Remains fresh and disturbing in an entirely unexpected way.” —The Guardian

Praise for The Chrysalids (NYRB Classics)

“One of the most thoughtful post-apocalypse novels ever written. Wyndham was a true English visionary, a William Blake with a science doctorate.” — David Mitchell

“It is quite simply a page-turner, maintaining suspense to the very end and vividly conjuring the circumstances of a crippled and menacing world, and of the fear and sense of betrayal that pervade it. The ending, a salvation of an extremely dubious sort, leaves the reader pondering how truly ephemeral our version of civilization is.” —The Boston Globe

“[Wyndham] was responsible for a series of eerily terrifying tales of destroyed civilisations; created several of the twentieth century’s most imaginative monsters; and wrote a handful of novels that are rightly regarded as modern classics.”—The Observer

“Science fiction always tells you more about the present than the future. John Wyndham’s classroom favourite might be set in some desolate landscape still to come, but it is rooted in the concerns of the mid-1950s. Published in 1955, it’s a novel driven by the twin anxieties of the cold war and the atomic bomb...Fifty years on, when our enemy has changed and our fear of nuclear catastrophe has subsided, his analysis of our tribal instinct is as pertinent as ever.”—The Guardian

“[A]bsolutely and completely brilliant...The Chrysalids is a top-notch piece of sci-fi that should be enjoyed for generations yet to come.”—Ottawa Citizen

“The Chrysalids is a famous example of 1950s Cold War science fiction, but its portrait of a community driven to authoritarian madness by its overwhelming fear of difference—in this case, of genetic mutations in the aftermath of nuclear war—finds its echoes in every society.”—The Scotsman

“The Chrysalids comes heart-wrenchingly close to being John Wyndham’s most powerful and profound work.”—SFReview.net

“Re-Birth (The Chrysalids) was one of the first science fiction novels I read as a youth, and several times tempted me to take a piggy census. Returning to it now, more than 30 years later, I find that I remember vast parts of it with perfect clarity...a book to kindle the joy of reading science fiction.—SciFi.com

“A remarkably tender story of a post-nuclear childhood...It has, of course, always seemed a classic to most of its three generations of readers...It has become part of a canon of good books.”—The Guardian
or
Buy Here
Copyright © 2020 American Booksellers Association