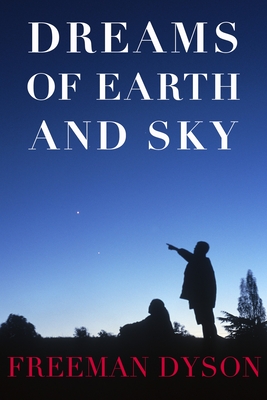 Dreams of Earth and Sky (Hardcover)

In this sequel to The Scientist as Rebel (2006), Freeman Dyson—whom The Times of London calls “one of the world’s most original minds”—celebrates openness to unconventional ideas and “the spirit of joyful dreaming” in which he believes that science should be pursued. Throughout these essays, which range from the creation of the Royal Society in the seventeenth century to the scientific inquiries of the Romantic generation to recent books by Daniel Kahneman and Malcolm Gladwell, he seeks to “break down the barriers that separate science from other sources of human wisdom.”

Dyson discusses twentieth-century giants of physics such as Richard Feynman, J. Robert Oppenheimer, Paul Dirac, and Steven Weinberg, many of whom he knew personally, as well as Winston Churchill’s pursuit of nuclear weapons for Britain and Wernher von Braun’s pursuit of rockets for space travel. And he takes a provocative, often politically incorrect approach to some of today’s most controversial scientific issues: global warming, the current calculations of which he thinks are probably wrong; the future of biotechnology, which he expects to dominate our lives in the next half-century as the tools to design new living creatures become available to everyone; and the flood of information in the digital age. Dyson offers fresh perspectives on the history, the philosophy, and the practice of scientific inquiry—and even on the blunders, the wild guesses and wrong theories that are also part of our struggle to understand the wonders of the natural world.

Freeman Dyson has spent most of his life as a professor of physics at the Institute for Advanced Study in Princeton, taking time off to advise the US government and write books for the general public. He was born in England and worked as a civilian scientist for the Royal Air Force during World War II. He came to Cornell University as a graduate student in 1947 and worked with Hans Bethe and Richard Feynman, producing a user-friendly way to calculate the behavior of atoms and radiation. He also worked on nuclear reactors, solid-state physics, ferromagnetism, astrophysics, and biology, looking for problems where elegant mathematics could be usefully applied.

Dyson’s books include Disturbing the Universe (1979), Weapons and Hope (1984), Infinite in All Directions (1988), Origins of Life (1986, second edition 1999), The Sun, the Genome and the Internet (1999), The Scientist as Rebel (2006, published by New York Review Books), and A Many-Colored Glass: Reflections on the Place of Life in the Universe (2010). New York Review Books will publish Dreams of Earth and Sky, a new collection of Dyson's essays, in April 2015. He is a fellow of the American Physical Society, a member of the National Academy of Sciences, and a fellow of the Royal Society of London. In 2000 he was awarded the Templeton Prize for Progress in Religion.

Praise For Dreams of Earth and Sky…

Praise for Dreams of Earth and Sky

“Readers will be delighted by the fascinating insider’s view of the scientific community and its intersection with the political establishment.” —Kirkus Reviews

"Dreams is just terrific if not staggeringly incandescent. It is human...His plainspokenness is arresting...Yet very little digging reveals the spreading roots of his thought process, its complexity, its great Whitmanesque reach...You could say that he puts his words where his mouth is, and his romantic, humane heart keeps the beat.” Peter Lewis, Christian-Science Monitor

“Strikingly original ideas and viewpoints expressed in stylish yet always lucid prose...No short summary can do justice to the wealth of imaginative brilliance and contagious enthusiasm of those visions. They are mind-expanding.”—Frank Wilczek, Physics Today

“Dyson is a rare thinker... The sheer breadth of his thought—and his ability to cohere this breadth into intelligible wisdom—is virtually unmatched. Throughout, Dyson remains eloquent and opinionated.”—B. Mitchell, Choice


Praise for The Scientist as Rebel

“Drawing on [his] instinct for unlikely connections, Dyson has become of one science’s most eloquent interpreters…. In a science of unifiers, Dyson prides himself as a diversifier.”
—The New York Times Book Review

“Dyson embodies the ideal of the scientist as iconoclast….Provocative, touching, and always surprising.”
—Wired

“Dyson expresses his precise thinking in prose of crystal clarity, and readers will be absolutely enthralled by his breadth, his almost uncanny ability to tie diverse topics together and his many provocative statements.”
—Publishers Weekly

“Readers will have no difficulty recognizing rebellion of the most valuable kind in this enlightening collection and will eagerly engage with it.”
—The Philadelphia Inquirer

“What really fills this book is wisdom—wisdom that helps us understand how scientists think and work and how science, properly understood, can help us make better sense of our world.”
—The Christian Science Monitor

“Dyson [is], neuron for neuron, one of the most formidably provocative minds in American life...The bedazzled reader emerges feeling like he’s been in a metaphysical Maytag on spin cycle—his perspective on man, God, and the cosmos permanently altered.” —The Washington Post Book World

“To observe a mind uncommonly endowed with dexterity and knowledge hop from subject to subject is exhilarating.” —Time

Praise for Disturbing the Universe

“A passionate testament, one of the most remarkable self-portraits of a scientist that I have ever read...Though this book is meant primarily for non-scientists, to acquaint them with how a scientist looks at the world, one does not have to read far to realize that this is the witness, not of a scientist representing his class, but of a unique kind of scientist, a man endowed with literary skill, with a rare capacity for humor and introspection, with a sensitive understanding of the language of the humanist.” —The New Republic

Praise for The Sun, the Genome, and the Internet: Tools of Scientific Revolution

“A most engaging and important book, as accessible as it is profound.” —Oliver Sacks

“A thoughtful and thought-provoking glimpse into the twenty-first century...A must-read...Only Dyson could weave together this rich tapestry, blending ethics, ideology, science, and technology into a coherent vision of the future.” —Michio Kaku, author of Hyperspace and Visions: How Science Will Revolutionize the 21st Century

"Physicist Dyson...demonstrates his intellectual breadth, wit, and iconoclasm in this collection… .his insights, passion, and knowledge make this collection well worth savoring.” —Publishers Weekly