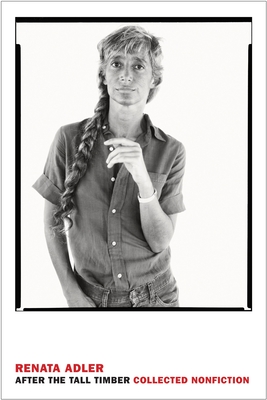 After the Tall Timber

What is really going on here? For decades Renata Adler has been asking and answering this question with unmatched urgency. In her essays and long-form journalism, she has captured the cultural zeitgeist, distrusted the accepted wisdom, and written stories that would otherwise go untold. As a staff writer at The New Yorker from 1963 to 2001, Adler reported on civil rights from Selma, Alabama; on the war in Biafra, the Six-Day War, and the Vietnam War; on the Nixon impeachment inquiry and Congress; on cultural life in Cuba. She has also written about cultural matters in the United States, films (as chief film critic for The New York Times), books, politics, television, and pop music. Like many journalists, she has put herself in harm’s way in order to give us the news, not the “news” we have become accustomed to—celebrity journalism, conventional wisdom, received ideas—but the actual story, an account unfettered by ideology or consensus. She has been unafraid to speak up when too many other writers have joined the pack. In this sense, Adler is one of the few independent journalists writing in America today.

This collection of Adler’s nonfiction draws on Toward a Radical Middle (a selection of her earliest New Yorker pieces), A Year in the Dark (her film reviews), and Canaries in the Mineshaft (a selection of essays on politics and media), and also includes uncollected work from the past two decades. The more recent pieces are concerned with, in her words, “misrepresentation, coercion, and abuse of public process, and, to a degree, the journalist’s role in it.” With a brilliant literary and legal mind, Adler parses power by analyzing language: the language of courts, of journalists, of political figures, of the man on the street. In doing so, she unravels the tangled narratives that pass for the resolution of scandal and finds the threads that others miss, the ones that explain what really is going on here—from the Watergate scandal, to the “preposterous” Kenneth Starr report submitted to the House during the Clinton impeachment inquiry, to the plagiarism and fabrication scandal of the former New York Times reporter Jayson Blair. And she writes extensively about the Supreme Court and the power of its rulings, including its fateful decision in Bush v. Gore.

Praise For After the Tall Timber: Collected Nonfiction…

"One of the most important postwar writers (and prose stylists), Adler here covers everything from generational silliness to civil rights in the South. It’s all the harder to put down because it sometimes boils your blood." —Flavorwire

“Adler’s prose is exacting and full of surprises. As it turns out, readers who started with Speedboat and Pitch Dark came to know Adler backwards. They—we; I— hardly knew her at all. As a journalist, Adler chronicled firsthand America’s odd beauty. There are articles and essays covering the early Civil Rights movement, Richard Nixon, soap operas, Biafra, the “hippie riots” in Los Angeles, the Six-Day War, and Hollywood films. It’s dark, but it’s also funny as hell. Renata Adler was a journalist at the top of her game, working for the country’s most well-respected publications. She was a woman working in a historically male-dominated industry who played by her own rules. Rediscovering Adler’s nonfiction feels right. After the Tall Timber feels like an extension of Speedboat and Pitch Dark, except here there’s the added urgency and political resonance of narrative nonfiction. The scale is greater, the stakes higher. Yet the method is the same. Either way, her impact is felt.” —Anna Wiener, The New Republic

“And yet, under that translucent superiority of style, there’s a hum, a glimmer, a threat—most un–New Yorker–ish—to Adler’s New Yorker pieces: the “scruffy, dazed, and twitching hen” in a Biafran marketplace. She possessed a set of literary instincts not quite as canine as, say, Hunter S. Thompson’s but no less acute or telepathic, and in the end rather more dangerous. She goes off (in her beautiful prose) like a barbarian blogger. Like, how come nobody around here has any fucking manners?! But if not for the out-of-scale ferocity of that, we wouldn’t have the tremendous metaphysical sobriety of “Irreparable Harm,” her 2001 New Republic demolition of the Supreme Court’s decision in Bush v. Gore. A rolling of tanks toward the statehouse, a tripping girl on the Sunset Strip. It’s the signature note of her work: that faint chime, like a wineglass flicked at the rim, of apocalypse. Invisibly, even modestly, the world just ended. Irremediable. Irreparable. But don’t you worry about it. Keep reading The New York Times.” — James Parker, The Atlantic

“Ladies and gentlemen, Renata Adler is back. It feels momentous and just plain correct that we now have After the Tall Timber, a new collection of Adler’s nonfiction.” — Abby Aguirre, Vogue.com

“These analytical pieces address some of the major American events of recent decades, such as Watergate, the Starr report on Bill Clinton, the Supreme Court ruling in Bush v Gore, and the decline of serious journalism, especially in the New York Times. (“The enterprise, whatever else it is, has almost ceased altogether to be a newspaper. It is still a habit.”). The return to print of Adler’s work is great news.” —Molly McCloskey, The Irish Times

“A boon to fans of Adler’s fiction and to anyone interested in the state of contemporary journalism, particularly those who prefer a brand of reporting that elevates facts, the story, above the byline. Adler’s collection sets a rigorous standard for reporting that, in light of recent failures at major American magazines, is timely and refreshing. Adler can be just plain funny; her ability to flow between gravity and jocularity is impressive. She is present in all of these pieces, a low-level vibration of critical genius.” —Lee Matalone, The Rumpus

“What’s happened to Renata Adler? Where has she gone, and why hasn’t her return — to the extent that it is one — been trumpeted from the hills? After the Tall Timber is, to put it mildly, an irresistible corrective. In its way, the book is an equivalent (how ideal is its title, in this respect) of the proverbial tree falling in a forest. The sound it makes is both piercingly private and roundly political, fully public in its implication. One ignores a book like this not just at one’s own peril, but at the peril of the Republic as well. One summation of her disdain for the Times comes at the beginning of “The Porch Overlooks No Such Thing” when she quotes its publisher Arthur Sulzberger, Jr.: “There’s no complacency here. Never has been. Never will be.” As Adler deliciously notes, such is “a perfect example of the self-refuting sentence. In its underlying idiocy and limitless self-regard it also manages to embody, and project through time, a virtual definition of the word “complacency.” She was, and is after all, a reporter. In any case, we’re more than lucky to have the pieces in After the Tall Timber returned to us.” — Matthew Spektor, LARB

“Adler has shown that bravery is one of the most important qualities a writer can possess. That courage, that commitment to telling the truth at all cost — and with language that is so consistently dazzling — is one of the qualities I respect most about her. It's what has kept me coming back to her work for so many years.” — Juan Vidal, NPR.com

“These books are beautifully voice-driven in a way where a reader might want to hear her take on just about anything. She is a very precise writer, an exquisite crafter of sentences and paragraphs. I want to know how someone who described their politics as moderate in the late sixties and early seventies would define themselves now. I want to hear what someone who covered the peace march in Selma has to say about what happened in Ferguson following the murder of Michael Brown. My own lack of real legal knowledge has me reading all that's here and wishing to appoint her to the Supreme Court.” — Brian Nicholson, Bookslut

“Last week I mentioned, that I was reading the new collection of Renata Adler essays, and now I'm going to mention it again, because the entire book is so fucking good. You have to read it.” — Haley Mlotek, The Hairpin

“What needs to be said about NYRB’s important updating and reissuing of Adler is that it is immensely valuable.” —Jeff Simon, Buffalo News

“She is a pleasure, often a joy, to read...Adler's work is not a reminder of how journalism used to be, but of how good, now and then, it could be when acute minds paid attention to the words published below their names...Adler writes very well indeed.” —Ian Bell, The Herald Scotland

Renata Adler was born in Milan and raised in Connecticut. She received a B.A. from Bryn Mawr, an M.A. from Harvard, a D.d’E.S. from the Sorbonne, a J.D. from Yale Law School, and an honorary LL.D. from Georgetown. Adler became a staff writer at The New Yorker in 1963 and, except for a year as the chief film critic of The New York Times, remained at The New Yorker for the next four decades. Her books include A Year in the Dark (1969); Toward a Radical Middle (1970); Reckless Disregard: Westmoreland v. CBS et al., Sharon v. Time (1986); Canaries in the Mineshaft (2001); Gone: The Last Days of The New Yorker (1999); Irreparable Harm: The U.S. Supreme Court and the Decision That Made George W. Bush President (2004); and the novels Speedboat (1976, Ernest Hemingway Award for Best First Novel) and Pitch Dark (1983), both available as NYRB Classics.

Michael Wolff, currently a contributing editor at Vanity Fair and a columnist for The Guardian, USA Today, and British GQ, is one of the most prominent journalists and pundits in the nation. He has written numerous best-selling books, including The Man Who Owns the News: Inside the Secret World of Rupert Murdoch, Burn Rate, and Autumn of the Moguls. He appears often on the lecture circuit and is a frequent guest on network and cable news shows.
Loading...
or
Not Currently Available for Direct Purchase