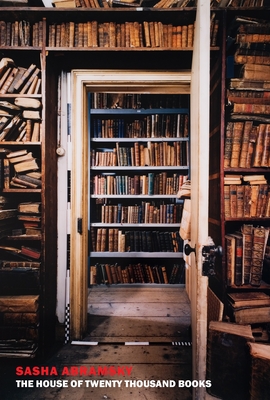 Named one of Kirkus's Best Nonfiction Books of 2015

The House of Twenty Thousand Books is the story of Chimen Abramsky, an extraordinary polymath and bibliophile who amassed a vast collection of socialist literature and Jewish history. For more than fifty years Chimen and his wife, Miriam, hosted epic gatherings in their house of books that brought together many of the age’s greatest thinkers.

The atheist son of one of the century’s most important rabbis, Chimen was born in 1916 near Minsk, spent his early teenage years in Moscow while his father served time in a Siberian labor camp for religious proselytizing, and then immigrated to London, where he discovered the writings of Karl Marx and became involved in left-wing politics. He briefly attended the newly established Hebrew University in Jerusalem, until World War II interrupted his studies. Back in England, he married, and for many years he and Miriam ran a respected Jewish bookshop in London’s East End. When the Nazis invaded Russia in June 1941, Chimen joined the Communist Party, becoming a leading figure in the party’s National Jewish Committee. He remained a member until 1958, when, shockingly late in the day, he finally acknowledged the atrocities committed by Stalin. In middle age, Chimen reinvented himself once more, this time as a liberal thinker, humanist, professor, and manuscripts’ expert for Sotheby’s auction house.

Journalist Sasha Abramsky re-creates here a lost world, bringing to life the people, the books, and the ideas that filled his grandparents’ house, from gatherings that included Eric Hobsbawm and Isaiah Berlin to books with Marx’s handwritten notes, William Morris manuscripts and woodcuts, an early sixteenth-century Bomberg Bible, and a first edition of Descartes’s Meditations. The House of Twenty Thousand Books is a wondrous journey through our times, from the vanished worlds of Eastern European Jewry to the cacophonous politics of modernity.

Sasha Abramsky was born in England, grew up in London, and attended Balliol College, Oxford, where he studied politics, philosophy, and economics. Abramsky is a journalist and author whose work has appeared in The Nation, The American Prospect, The New Yorker online, and many other publications. His most recent book, The American Way of Poverty: How the Other Half Still Lives, was listed by The New York Times as among the one hundred notable books of 2013. He is a Senior Fellow at Demos think tank, and teaches writing at University of California, Davis. Abramsky lives in Sacramento, California, with his wife and their two children.


Praise For The House of Twenty Thousand Books…

"This is a fierce and beautiful book. It burns with a passion for ideas, the value of history, the need for argument. As a memoir of a grandfather it is sui generis. I loved it." —Edmund de Waal, author of The Hare with Amber Eyes

"Sasha Abramsky's account of his grandfather's devotion to books and reading is a moving testimonial to the persistance of human curiosity in a world that seems to drift farther and farther from the delight of intellectual pursuits. It is a moving, instructive, astonishing account of one man's love for the printed word that all readers will appreciate. The House of Twenty Thousand Books deserves twenty hundred thousand readers. — Alberto Manguel

"[Sasha Abramsky] has a knack for swimming deep in the sea of ideas... [He] offers smart, concise pocket explanations of matters ranging from the effect of 18th-century French utopianism on leftist thinking to brief discourses on methodologies of Talmud study...Drawing on numerous interviews with Chimen’s contemporaries and an impressively deep dive into the archives, the book grapples sensitively and honestly with how many of the conversations at 5 Hillway were conducted...In his grandson’s loving, but intellectually responsible tribute, Chimen Abramsky has found his posterity.” —Jeremy Dauber, The Wall Street Journal

“An evocative, often affecting and remarkably candid chronicle of Chimen [Abramsky’s] life...One of the strategies I most admired about this book is that Sasha chooses to offer succinct essays about the ideas, historical events and personalities that animated his grandfather. Sasha is so vivid a writer that scenes linger in the memory...For anyone who cannot throw away a book, even if it will never be read and even if it ends up crowding a home, The House of Twenty Thousand Books is an affirmation.” —Joseph Berger, Haaretz

"A narrative that tells the tale of the 20th century: communists, zionists, fascists, fetishists, secularists and a great scene of academic intrigue. Chimen Abramsky is a worthy subject: his unorthodox intellectual approach and his awe-inspiring collection of books are both marvels to behold. While Abramsky’s grandson writes the story of his life with subtlety and affection, he also evokes the culture of the time in all its foolishness, grandeur, earnestness and ideological disappointment." —Jeff Deutsch, Seminary Co-op Bookstore

“[A] warmhearted, frank memoir...Abramsky shares fascinating stories of British intellectual luminaries like Eric Hobsbawm and Isaiah Berlin who were regular visitors to 5 Hillway or close friends of his grandfather...as much as this book is the story of a life of the mind, it's also a tender account of the way this increasingly dilapidated, book-crammed home became for an adoring grandson, 'my school, my university, my library, my sanctuary when the going got tough at home.' Balancing that affection with a sense of awe at the story of his grandfather's fascinating life, Sasha Abramsky has produced a work that will appeal to book lovers and readers of family memoir.” —Harvey Freedenberg, Shelf Awareness

“Sasha Abramsky’s account rambles into marvelously eclectic corners, from the authentication of incunabula, to the differences between vellum and parchment, to the Rabbinic position on pigskin bindings...Certainly Chimen’s lifelong friendships with Isaiah Berlin, Piero Sraffa, and other twentieth century thinkers will interest many readers. But the most fascinating story is the evolution of Chimen himself—the son with serious rabbinic yichis who rejected religion but ran two Seders a year and never served treyf in his home; the Party member so faithful he eulogized Stalin, until he discovered the lies and turned in his membership card; the book dealer who spent decades curating an exhaustive collection of Socialist literature, only to become one of Europe’s leading collectors of Judaica. Historians of the Old and New Left movements in Britain, students of Jewish history and philosophy, and book-lovers of any stripe will find this memoir totally absorbing.” —Bettina Birch, Jewish Book World

"The sheer richness of this marvelous book— in terms of its style, think Borges, Perec—amply complements the wondrous complexity of the family—in terms of its subject matter, think the Eitingons, the Ephrussi—about which Sasha Abramsky writes so lovingly. And as a portrait of London’s left-wing Jewish intellectual life it is surely without equal." —Simon Winchester, author of The Professor and the Mad Man

"Transformative journeys were undertaken by more than a million Russian Jews between the 1890s and 1920s, expelled by successive waves of pogroms, revolution, civil war and persecution. Sasha Abramsky’s tender, intelligent, many-layered memoir of his grand-parents, The House of Twenty Thousand Books, is a version of this same story, at once epic and intimate, rooted in family life but encompassing the sweep of history. At its heart are loss and renewal, tradition and reinvention, schism and continuity." —Rebecca Abrams, Financial Times

"A wonderful celebration of the mind, history, and love." —Kirkus Reviews, starred review

"Sasha Abramsky has produced a wonderful addition to the canon of Jewish grandchild literature: one that would be well worth its place in Chimen Abramsky’s now immortal house of books." —Toby Lichtig, The Times Literary Supplement

"Sasha Abramsky has combined four kinds of history —familial, political, Jewish, and literary—into one brilliant and compelling book. With him as an erudite and sensitive guide, any reader will be grateful for the opportunity to be immersed into the house of twenty thousand books." —Samuel G. Freedman

"The book succeeds marvelously. . . . The descriptions of the atmosphere of the Abramsky house itself are ravishing, and Sasha telegraphs his childlike delight in cradling his patrimony." —Vladislav Davidzon, Tablet


"Abramsky’s tale begins after his grandfather Chimen’s death, with his family faced with the daunting task of cleaning out a London house filled to bursting with books, many of them rare, on Marxism, socialism, and Judaica. Doing so stirred the desire to make sense of this literary and familial legacy, which Abramsky chronicles in a loving but clear-eyed manner." —Publishers Weekly

“The House of Twenty Thousand Books is an entertaining and passionate mix of genealogy, bibliomania and intellectual history and is a must read for the those of us living with books.” —Michael Lieberman, Seattle Post-Intelligencer

"Memorialising an epoch in Jewish life, [Abramsky] mixes the visual with the instructive in a way that could inspire a television series." --The Jewish Chronicle

"I loved this touching and heartfelt celebration of a scholar, teacher and bibliophile, a man whose profound learning was fine-tempered by humane wisdom and self-knowledge. We might all of us envy Sasha Abramsky in possessing such a remarkable grandfather, heroic in his integrity and evoked for us here with real eloquence and affection." --Jonathan Keates

"The House of Twenty Thousand Books is a grandson's elegy for the vanished world of his grandparents’ house in London and the exuberant, passionate jostling of two traditions ¬– Jewish and Marxist – that intertwined in his growing up.  It is a fascinating memoir of the fatal encounter between Russian Jewish yearning for freedom and the Stalinist creed, a grandson's unsparing, but loving reckoning with a conflicted inheritance. In the digital age, it will also make you long for the smell of old books, the dust on shelves and the collector's passions, all on display in The House of Twenty Thousand Books." —Michael Ignatieff
or
Not Currently Available for Direct Purchase
Copyright © 2020 American Booksellers Association