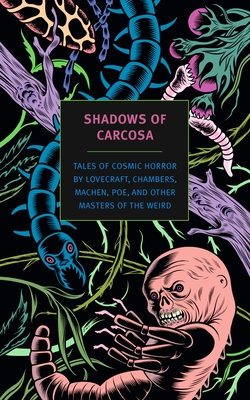 Tales of Cosmic Horror by Lovecraft, Chambers, Machen, Poe, and Other Masters of the Weird

From the fictional land of Carcosa that inspired the HBO show True Detective to H. P. Lovecraft’s accursed New England hills, this collection features some of the most legendary landscapes of the cosmic horror genre. The collection includes the following twelve stories:

“The true weird tale has something more than a secret murder, bloody bones, or a sheeted form clanking chains. An atmosphere of breathless and unexplainable dread of outer, unknown forces must be present; a hint of that most terrible conception of the human brain—a malign and particular suspension or defeat of those fixed laws of Nature which are our only safeguard against the assaults of chaos and the daemons of unplumbed space.”—H. P. Lovecraft

Ambrose Bierce (1842–1914) was born in Ohio and served in the Civil War. A lifelong journalist, he disappeared mysteriously in Mexico in 1913 while on his way to meet Pancho Villa’s army. Among his works are two collections of stories, Tales of Soldiers and Civilians and Can Such Things Be?, and a brilliant satire, The Devil’s Dictionary.

Algernon Blackwood (1869–1951) was born into an upper-class British family. He emigrated to America at the age of twenty and stayed there some ten years, during which time he worked as a reporter for The New York Evening Sun and The New York Times. When he returned to England he turned to writing fiction and soon made a name for himself with the John Silence stories, which relate the exploits of a psychic detective. Blackwood became famous in later years for playing “the Ghost Man” on BBC radio.

R.W. Chambers (1865–1933) was born in Brooklyn and studied at the Art Students League and the Ecole des Beaux-Arts, exhibiting in the Salon in 1889. He sold illustrations to fashion magazines in New York City before taking up writing and finding success with his collection of stories The King in Yellow, which includes “The Repairer of Reputations.” In later life Chambers published a number of highly successful popular novels, including The Restless Sex and Police!!!, the proceeds from which allowed him to settle in a mansion in upstate New York, where he devoted himself to hunting and fishing.

Walter de la Mare (1876–1956) was one of seven children of an official at the Bank of England. He did not attend university, but worked as a bookkeeper for an oil company for some eighteen years, in the course of which he published the poems and stories that secured his literary reputation. In 1908 a grant from the Civil List allowed him to write full time. De la Mare’s fiction includes the novels The Return and The Memoirs of a Midget, as well as many stories. His poems for children and adults and his brilliantly inventive anthologies were much admired by T.S. Eliot, who became his publisher, and by W.H. Auden.

Henry James (1843–1916) was born in New York City. His father was a distinguished theologian and a follower of Emanuel Swedenborg; his older brother William James became one of America’s finest philosophers. James attended Harvard Law School and, with the encouragement of William Dean Howells, took to writing criticism and fiction. After 1866 he lived largely in Europe. His many works include the novels A Portrait of a Lady, The Wings of the Dove, The Ambassadors, and The Golden Bowl, as well as many short stories.

H.P. Lovecraft (1890–1937) was born and died in Providence, Rhode Island. His father died of syphilis when he was eight years old; his mother was later institutionalized for mental illness; and Lovecraft himself was a sickly child.  In 1913 he joined the United Amateur Press Association, beginning a career as a writer in the course of which he published poems, journalism, and stories. Increasingly drawn to horror fiction, Lovecraft was a regular contributor to the Chicago pulp magazine Weird Tales. His first book-length collection of stories, The Outsider, did not appear until 1939, two years after his death.

Arthur Machen (1863–1947) was born in Wales. After failing to gain admission to the Royal College of Surgeons, he worked, not very successfully, as a journalist and translator (most famously of Casanova’s memoirs). A friend of the mystic A.E. Waite and a member of the Order of Golden Dawn,  Machen was deeply interested in the occult. His fiction includes The Great God Pan, The Three Impostors, and The Hill of Dreams.

Edgar Allan Poe (1809–1849) was the son of two traveling actors. Born in Boston, he was orphaned early and adopted by a tobacco exporter in Richmond, Virginia. Poe attended the University of Virginia, which he left because of gambling debts, and West Point, from which he was dishonorably discharged. “MS. Found in a Bottle” was Poe’s first significant success, and it helped him to obtain an editorial position on The Southern Literary Messenger in Baltimore, though he was soon fired for drinking. Poe married his thirteen-year-old cousin, Virginia, and moved north, where he lived in New York City and Philadelphia while continuing to produce poems, criticism, and stories at a prodigious rate. After his wife’s death from tuberculosis, Poe’s behavior became increasingly erratic. In 1849 he was found drunk and delirious in a bar in Baltimore, the apparent victim of a political gang that had kept him inebriated while escorting him from ballot station to ballot station to cast repeat votes. He died four days later.

M.P. Shiel (1865–1947) was born in the West Indies, the son of a Methodist minister of Irish and African descent. Shiel studied classics at King’s College London, flirted with medicine, then took up journalism. His most popular work in his lifetime was his novel The Yellow Danger, and Shiel, who became increasingly xenophobic over the course of his life, is said to have invented the term “the yellow peril.” His best-known work today is the remarkable apocalyptic fantasy The Purple Cloud. Described by contemporaries as “gorgeously mad,” Shiel had become a reclusive religious maniac by the time of his death. His last book, Jesus, remains unpublished.

Bram Stoker (1847–1912) was born in Dublin and studied mathematics at Trinity College, by which time he was already composing horror stories. He published Dracula in 1897. Among Stoker’s other books are The Jewel of Seven Stars and The Lair of the White Worm.

D. Thin was born in Grand Island, Nebraska, and studied in Paris.
or support indie stores by buying on
Copyright © 2020 American Booksellers Association