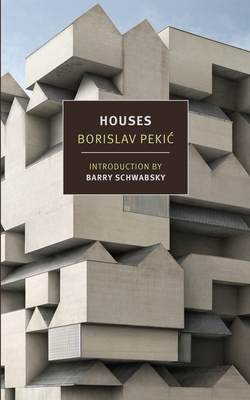 Building can be seen as a master metaphor for modernity, which some great irresistible force, be it Fascism or Communism or capitalism, is always busy rebuilding, and Houses is a book about a man, Arsénie Negovan, who has devoted his life and his dreams to building.

Bon vivant, Francophile, visionary, Negovan spent the first half of his life building houses he loved and even named—Juliana, Christina, Agatha—while making his hometown of Belgrade into a modern city to be proud of. The second half of his life, after World War II and the Nazi occupation, he has spent in one of those houses, looked after by his wife and a nurse, in hiding. Houses is set on the final day of his life, when Negovan at last ventures forth to see the world as it is.

Negovan is one of the great characters in modern fiction, a man of substance and a deluded fantasist, a beguiling visionary and a monster of selfishness, a charmer no matter what. And perhaps he is right to fear that home is only an illusion in our world, or that only in illusion is there home.

“Pekić writes with a wry grace that lets all the seriousness and thought fold inside a stubborn yet subtle farce. Accomplished and piquant.” —Kirkus Reviews

“The Houses of Belgrade deserves the most honest praise a reviewer can give: it was so good I can’t wait to read [Pekić’s] first book for my own pleasure...Pekić has drawn his portrait with exquisitely subtle lines, choosing words with such care that Arseniev says worlds about himself while he is talking about someone else.” —Peter Grier, The Christian Science Monitor

“In its best moments, [The Houses of Belgrade] rates with the intricate writings of Russian and French masters...It is a naked eye that can take us into a building of cold-water flats...into the den of a wretched man—and then make us step back from this tremendous detail into the unimaginable widths of human suffering. Pekić has mirrored the world, its fire, its blood, in the clouded eye of a madman, in a bog, reducing its vastness to a few cubic feet of muddy water—and the reflection is ugly.” —Katherine Knorr, Chicago Tribune

“Written in 1978, Mr. Pekiç's novel is a delicate farce that exemplifies the best of Yugoslavian literature… chronicles the life of Negovan, itself a mirror for the conflicts of the 20th century. Houses offers a fascinating window into literature of the other Europe.” —Karl Wolff, New York Journal of Books

Borislav Pekić (1930–1992) was born in Montenegro and educated in Belgrade, where he was arrested in 1948 for his founding role in the Association of Democratic Youth of Yugoslavia and sentenced to fifteen years of hard labor. Though he contracted tuberculosis during the five years of the term he eventually served, he was able during this period to draft extensive outlines for future writings, including the family tree of the protagonist of Houses. After studying psychology at the University of Belgrade, Pekić worked as a screenwriter, collaborating on more than twenty scripts, among them The Fourteenth Day, which represented Yugoslavia at the 1961 Cannes Film Festival. His first novel, The Time of Miracles, was published in 1965. In 1970, Houses won the prestigious NIN Award for best Serbian novel, and Pekić managed to obtain a passport and emigrate to London. Living as an expatriate he continued to write novels and advocate for democratic reform. In all, Pekić would write more than thirty works of fiction and nonfiction and saw some two dozen of his plays produced for the stage. Among his notable works are Kako upokojiti Vampira translated into English as How to Quiet a Vampire, 1977) and the seven volume saga of the Negovan family, Zlatno Runo (The Golden Fleece, 1978–1986). Following the collapse of Communism, he returned periodically to Serbia, finally helping to form the new Serbian Democratic Party in 1990 and clashing with security forces at an anti-Milošević rally in 1991. The next year he died of lung cancer in London.

Bernard Johnson (1933–2003) was affiliated with the Language Centre at the London School of Economics for many years. In 1970 he edited and translated the first anthology of modern Yugoslav literature, and throughout his career he distinguished himself as one of the most active translators of Serbo-Croatian poetry and prose working in English. In addition to Houses, NYRB Classics publishes Johnson’s translation of Aleksandar Tišma’s The Use of Man.

Barry Schwabsky is the art critic for The Nation and an editor at Artforum. His books include The Perpetual Guest: Art in the Unfinished Present and Words for Art: Criticism, History, Theory, Practice and several poetry collections, most recently Trembling Hand Equilibrium.
Loading...
or
Not Currently Available for Direct Purchase