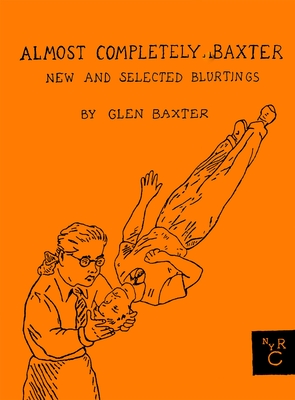 Over four decades and a multitude of books, “Colonel” Glen Baxter has built a world and a language all his own—slightly familiar, decidedly abnormal, irresistibly funny. Have you felt the terror of a failed Szechuan dinner? Have you seen what happens at precisely 6:15? Do you know where the beards are stored? Either way, this is the book for you.

This new selection of Baxter’s work brings together highlights from the full sweep of his long career, and is sure to enchant both confirmed Baxterians and those iin dire need of an introduction.

This NYRC edition is a hardcover with printed endpapers, debossed cover design, and extra-thick paper.

Glen Baxter is the author of many books since the 1970s, including The Impending Gleam, The Billiard Table Murders, and Blizzards of Tweed. His work has appeared in The New Yorker, Vanity Fair, Elle, Vogue, Le Monde, The Observer, and The Independent on Sunday. He is a Chevalier of the Order of Arts and Letters, and his art is often exhibited in New York, Amsterdam, Paris, and London, where “Colonel” Baxter lives.

Marlin Canasteen is the author of The Balearic Trilogy and the acclaimed biography of the great American poet Richard Griffin. His books have been translated into fifteen languages. For many years he acted as Security Advisor at the Bolick Mandolin Conservation Society in Duluth, Minnesota. He currently resides in Toledo, Ohio.

“Mr. Baxter betrays all the ominous symptoms of genius.”—Edward Gorey

“Many people have tried to imitate Baxter...few have come close to succeeding.”—Salman Rushdie

“It is the contrast between the bald simplicity of the drawings and the baroque excess of the captions that makes Baxter such a significant figure not just in the cartoon business, but in the British comedy landscape.”—The Guardian
or
Buy Here
Copyright © 2020 American Booksellers Association