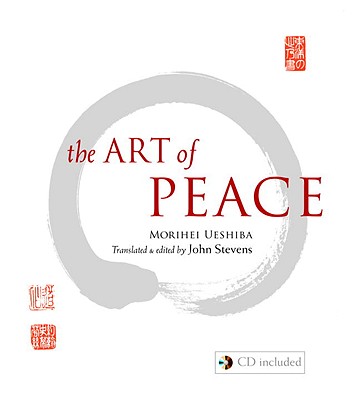 The Art of Peace [With CD (Audio)]

The real way of the warrior is based on compassion, wisdom, fearlessness, and love of nature as the inspirational teachings in this collection show. The selections are drawn from the talks and writings of Morihei Ueshiba, founder of the popular Japanese martial art of aikido, a mind-body discipline that offers a nonviolent way to victory in the face of conflict. This lovely hardcover edition features examples of Ueshiba's calligraphy and includes a reading of the text on one audio CD.

Praise For The Art of Peace [With CD (Audio)]…

“Poetic and profound. This collection offers a treasure trove of insights into the human adventure!”—Spirituality and Practice

Morihei Ueshiba (1883-1969) was the founder of Aikido. At age eighteen, Ueshiba joined the Japanese military, during which time he also developed his skills in the martial arts. He eventually left the military, deeply discouraged by the death and destruction that results from combat. Ueshiba continued to experiment with a variety of martial arts, finding particular joy in the spiritual aspects of martial arts. He came to believe that a real warrior was one who was rooted in love, and it was in this spirit that he began to develop Aikido, a martial art that emphasizes harmony and the peaceful resolution of conflict.
Loading...
or
Not Currently Available for Direct Purchase