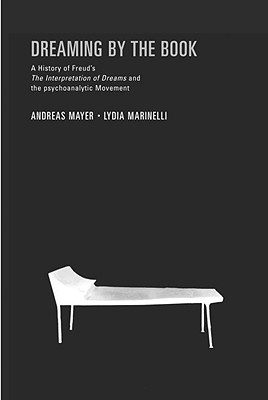 Dreaming By the Book

More than a hundred years after their first publication, Freud’s theories of dream interpretation occupy a firm place in the canon of Western thought. Since The Interpretation of Dreams appeared in 1899, a significant psychoanalytic movement has grown out of the multiple processes detailed within Freud’s essential and foundational text. Lydia Marinelli and Andreas Mayer offer a thorough and lucid historical and sociological investigation of the changes dream interpretation underwent between 1899 and 1930, a period of time over which eight different editions of the book were produced.

In this groundbreaking study, Marinelli and Mayer make the case that Freud’s readers contributed heavily to the numerous revised editions of the book through their invaluable critiques. Marinelli and Mayer systematically emphasize the involvement of these individuals, who have not previously been taken into consideration or who have been insufficiently accounted for in the editions of The Interpretation of Dreams to date: the critics, colleagues, and patients who formed the audience for each edition of the study as it appeared. The various alterations in the text over the course of its eight editions are thus not examined as immanent theoretical movements oriented toward Freud alone. Instead, they are examined as indicators for social negotiations between the author and the members of the growing psychoanalytic movement in Zurich and Vienna. The authors provide strong arguments toward the case that psychoanalytic theory is the outcome of collective and conflictual processes, revealing that The Interpretation of Dreams is inextricably intertwined with the formation of the psychoanalytic movement and its bifurcations.

The book is supplemented by texts and correspondence that have long remained unpublished or out of print, including two important works by Otto Rank that were part of the fourth and following editions of Freud’s book, as well as a text by Sigmund Freud’s brother, Alexander, and letters from Eugen Bleuler and Alphonse Maeder.

Träume nach Freud exists now in the second edition (2009) as part of Lydia Marinelli’s Collected Works; the third German edition will appear in 2011 with the same publisher (Turia + Kant, Vienna).


Praise For Dreaming By the Book…

"Freud's The Interpretation of Dreams appeared in eight editions between 1899 and 1930. Here, Mayer and Marinelli track textual changes in relation to psychoanalytic practice, arguing that discursive and social formations have mutual influences that can be identified. This pioneering bibliographic and historical effort shows how Freud's original text preceded a methodology of dream interpretation, which, in the middle phase, incorporated, myth and literature in a lexicon of symbols, ending with canonization of the text."

Lydia Marinelli (1965-2008) was one of the most brilliant Austrian historians of her generation. After studies at the University of Vienna where she took her PhD in 1999, she became curator at the Sigmund Freud Museum and served later as a director of scientific research. Her exhibitions, all realized at the Freud museum Vienna, were major contributions to a renewal of the image of Freud and psychoanalysis. In her publications, she was the first one to study in closer detail the role of the media and of material culture in the making of psychoanalytic knowledge in a deep epistemological sense. Both her dissertation on the International Psychoanalytic publishing house and her collected papers (under the title Tricks der Evidenz, edited by Andreas Mayer, Vienna, Turia + Kant, 2009) were published posthumously.

Andreas Mayer is a historian and sociologist of science, who has published extensively on the history of the human sciences, notably on the history of psychoanalysis and its related discourses and practices. He was a lecturer and research fellow at the University of Cambridge and, for many years, a research scholar at the Max Planck Institute of the History of Science in Berlin. Since 2014 he is affiliated as a researcher to the Centre A Koyré for the History of Science in Paris (CNRS) and teaching at the École des Hautes Études en Sciences Sociales. His most recent publications are Sites of the Unconscious. Hypnosis and the Emergence of the Psychoanalytic Setting (Chicago UP, 2013) and Sciences of Walking (published in German 2013 by Fischer, Frankfurt, English translation forthcoming, Chicago UP).

Susan Fairfield is an editor, translator, and poet. She is also the author of papers on literary criticism, a psychoanalyst, and co-editor of Bringing the Plague: Toward a Postmodern Psychoanalysis. She lives in the Bay Area of California.
Loading...
or
Not Currently Available for Direct Purchase