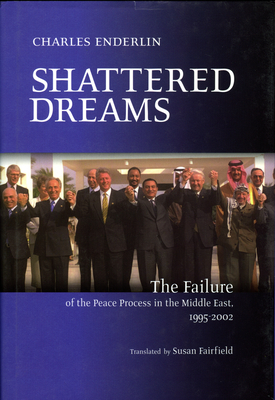 As Middle-East Bureau Chief of the French Public television network and a resident of Jerusalem since 1968, Charles Enderlin has had unequaled access to leaders and negotiators on all sides. Here he takes the reader step-by-step along the path that began with the hope of agreement but led only to the ultimate collapse of the peace process. The dramatic account moves between the occupied territories and the negotiation tables as it follows the emotional shifts in the conflict from the 1995 assassination of Yitzhak Rabin to the years when Benjamin Netenyahu was in power. In a definitive account of the meetings at Camp David in July 2000, Enderlin details what was said between Israeli and Palestinian negotiators brought together by Bill Clinton in the presence of Yasir Arafat, President of the Palestinian Authority, and Israeli Prime Minister Ehud Barak.

Praise For Shattered Dreams: The Failure of the Peace Process in the Middle East, 1995 to 2002…

"SHATTERED DREAMS is a deeply reported and scrupulous account of seven key years in the history of the conflict from the assassination of Prime Minister Yitzhak Rabin in November of 1995 to the first election of Ariel Sharon a little over two years ago."

Charles Enderlin
Charles Enderlin has been the Bureau Chief for France 2 since 1990. When Shattered Dreams (Other Press, 2003) was first published in France it was an immediate bestseller and led to a documentary series aired worldwide. The Lost Years also became the basis for a television documentary, “The Years of Blood,” to be aired in its American version by the Discovery Times Channel and in its international version by TV stations all over Europe. He has lived in Jerusalem since 1968.
Also by this author: The Lost Years

Susan Fairfield
Susan Fairfield is an editor, translator, and poet. She is also the author of papers on literary criticism, a psychoanalyst, and co-editor of Bringing the Plague: Toward a Postmodern Psychoanalysis. She lives in the Bay Area of California.
Also by this author: Biology of Freedom, Freud, The Whispering of Ghosts, History Beyond Trauma, Dreaming by the Book, Freud the Man, Introduction to the Reading of Lacan, Why Do Women Love Men and Not Their Mothers?, Lacan, Lacanian Psychotherapy with Children, The Clinical Lacan, What Does a Woman Want?
Loading...
or
Not Currently Available for Direct Purchase