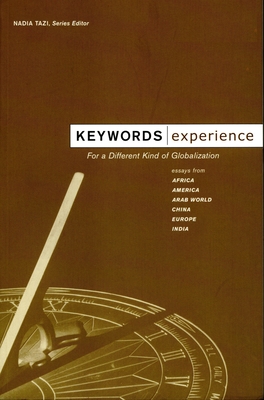 Entitled Keywords, this original and international experiment is divided into four concise volumes. Each one refers specifically to a word that is key to the understanding of the human condition. Truth, Identity, Gender, and Experience are concepts that we presume universal; therefore we would be hard-pressed to think that they refer to different systems of thought in cultures distinct from our own. Keywords explores the cultural specificity of these terms, and links them to issues that are most relevant for the region under consideration.

Each volume of the series offers six different points of view on a given keyword. The authors, who have been carefully selected by their respective publishers for their mastery in their fields and for the clarity of their writing, have been given free rein to share their distinctive visions of the concept at hand and to emphasize particular examples that would best illustrate their unique perspectives.

In the volume entitled Gender for example, we find a highly contemporary American analysis of the tension between feminist studies and the concept of the "queer," while the Arab reading of the same word turns to the history of the Arab world to champion the cause of women and homosexuals.

For the African author, identity is bound up with questions of ethnicity, race, and colonial laws. The Chinese author shows how in his country identity has been informed in the 20th century by Western references, such as Marxism and the market economy, because at its roots Chinese thought does not directly include these notions. The American author selects Tiger Woods' debate with the media to reveal how in the United States the question of "identity politics" defeats the ideals of multiculturalism.

Experience in China may be understood classically as an actual event but also as revealing what cannot be spoken. The French reading emphasizes the contrast between the scientific experience, its psychoanalytic version, and the definition of the "judgment of experience" as formulated by Kant.

Truth, from the American perspective, appears to have shifted from a mathematical and universal model to a contemporary notion of truth so elusive and plural that it has almost disappeared as a concept. The Indian approach is deeply historical, as it surveys the meaning of truth from the Vedas to the Gandhian ideal. The African author in this instance has chosen to ignore the history of the concept in order to concentrate on a crucial contemporary question: How well has the South African Commission for Truth and Reconciliation worked and what are its realistic limitations?

The variety of the authors' backgrounds (anthropology, philosophy, sociology, epistemology) and their commitment to making Keywords relevant in the explosive "here and now" offer new parameters for envisioning the implications of the process of globalization. This project is required reading for anyone who aspires to become an informed citizen of the world.

Keywords will be published in its entirety in 2004 by Other Press. The series will be brought out simultaneously by the other five participating publishers in the languages native to their territories. Each essay was written originally for this series and has never before been published.

Nader El-Bizri is currently an Affiliated Research Scholar at the Department of History and Philosophy of Science at the University of Cambridge and a Research Associate in Philosophy at the Institute of Ismaili Studies in London. Of his scholarly writings, he has recently published The Phenomenological Quest Between Avicenna and Heidegger (GP, Binghamton, 2000).

Martin Jay is Sidney Hellman Ehrman Professor of History at the University of California, Berkeley. His most recent books are Refractions of Violence (Taylor & Francis, 2003) and Songs of Experience (forthcoming, 2004).

G.K. Karanth is Professor and Head, Sociology Unit at the Institute for Social and Economic Change, Bangalore, India. His publications include Challenging Untouchability: Dalit Initiative and Experience from Karnataka

Achille Mbembe is from Cameroon, and is Research Professor in History and Politics at the University of Witwatersrand, Johannesburg, and Senor Researcher at Witwatersrand Instistute for Social and Economic Research (WISER). His latest work is On the Postcolony (University of California Press, Berkeley, 2001).

Ye Shu-Xian is professor of Chinese Literature at the Chinese Academy of Social Sciences, Peking. He has published A Cultural Interpretation of Lao Tzu.
or
Not Currently Available for Direct Purchase
Copyright © 2020 American Booksellers Association