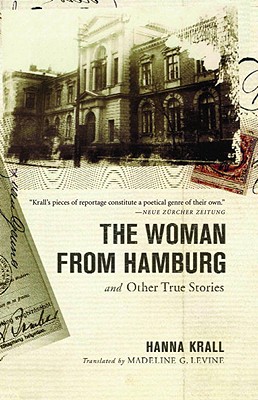 The Woman from Hamburg

and Other True Stories

In twelve nonfiction tales, Hanna Krall reveals how the lives of World War II survivors are shaped in surprising ways by the twists and turns of historical events. A paralytic Jewish woman starts walking after her husband is suffocated by fellow Jews afraid that his coughing would reveal their hiding place to the Germans. A young American man refuses to let go of the ghost of his half brother who died in the Warsaw ghetto. He never knew the boy, yet he learns Polish to communicate with his dybbuk. A high ranking German officer conceives of a plan to kill Hitler after witnessing a mass execution of Jews in Eastern Poland.

Through Krall's adroit and journalistic style, her reader is thrown into a world where love, hatred, compassion, and indifference appear in places where we least expect them, illuminating the implacable logic of the surreal.

"It is precisely the difficult path [Krall] takes toward her topic that has made some of these texts masterpieces."
-- Frankfurter Allgemeine Zeitung (on Dancing at Other People's Weddings)

Praise For The Woman from Hamburg: and Other True Stories…

Hanna Krall was born in Warsaw in 1937 and was a reporter for Polityka from 1957 until 1981, when martial law was imposed and her publications were banned. The recipient of numerous international literary awards, her books have been translated into 15 languages. She lives in Warsaw.

Madeline G. Levine was Czeslaw Milosz's prose translator. Her translation of Ida Fink's A Scrap of Time and Other Stories was awarded the PEN Book-of-the Month Club Translation Prize.
Loading...
or
Not Currently Available for Direct Purchase