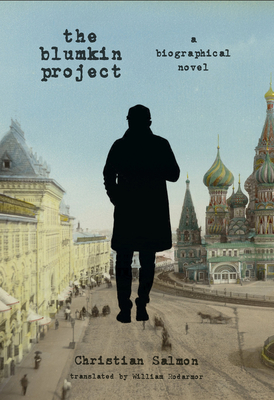 The Untold Story of a Russian Poet and Terrorist

This page-turning biography follows the footsteps of a forgotten legend of the Russian Revolution.

Yakov Blumkin claimed to have had nine lives. He was a terrorist, the assassin of the German ambassador Wilhelm von Mirbach, a poet close to the avant-garde, a member of Cheka, a military strategist, a secret agent, and Leon Trotsky’s secretary. Executed in 1929 on the orders of Stalin at the age of twenty-nine, he has continued to inspire a powerful curiosity: Since the fall of the Soviet Union, Russian Internet users have been adopting “Blumkin” as a pseudonym, and wild rumors and falsehoods about his extraordinary life abound today.

With a trove of manuscripts, documents, rare photographs, and personal souvenirs, writer and researcher Christian Salmon sets out to reconstruct the shadowy past of this multifaceted figure.

Christian Salmon is a writer and researcher at France’s National Center for Scientific Research (CNRS). He founded and was a member of the International Writers’ Parliament from 1993 to 2003. He is the author of several books, including Verbicide, Devenir minoritaire: Pour une nouvelle politique de la littérature (coauthored with Joseph Hanimann), and Tombeau de la fiction.

William Rodarmor is a former journalist who has translated some forty-five books and screenplays in genres ranging from literary fiction to espionage and fantasy. In 2017 he won the Northern California Book Award for fiction translation for The Slow Waltz of Turtles by Katherine Pancol. He lives in Berkeley, California.

Praise For The Blumkin Project: The Untold Story of a Russian Poet and Terrorist…

“For this man of many identities, each past episode consists of multiple versions…As an expert in the art of narrative, Christian Salmon understands what is most fascinating about this period of history: that the contemporaries of the revolution were, as the poet Mandelstam wrote, ‘cast out of their own biographies.’” —Le Monde des livres

“An investigation that reads like a spy novel, but a true novel in which we encounter Mandelstam, Mayakovsky, and Victor Serge.” —Livres Hebdo