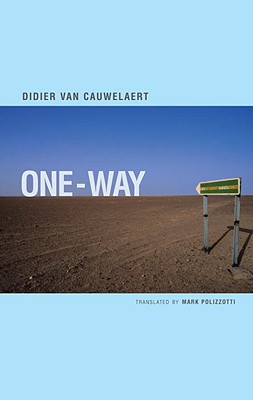 Winner of the Prix Goncourt and chosen by The Seattle Times as one of the Best Books of 2004
"One-Way is a funny and tender look at a world of shifting boundaries...Aziz Kemal is a protagonist for these times."
-Sam Lipsyte, author of Home Land
"Outrageously funny."
-The Seattle Times
"Mr. van Cauwelaert has a fine, light touch and makes Aziz the most charming and gentle of liars."
-The New York Sun
"A mad tale, funny and cruel, tender and inventive, in which all the hypocrisy of our society is put forward without ever becoming heavy-handed."
-Les Echos
Hailed as a marvel and awarded France's most prestigious literary prize, One-Way recounts the comic, absurd, and all-too-believable adventures of Aziz Kemal, a young Frenchman raised as an Arab by Marseilles gypsies. Arrested for a crime he didn't commit, Aziz becomes the target of a government campaign to repatriate illegal immigrants and finds himself en route to Morocco, despite the fact that he isn't Moroccan. Accompanying Aziz is a touchingly naive and neurotic "humanitarian attache" named Jean-Pierre Schneider, who drowns his own personal woes in his zeal to build a new life for his charge in a land neither one has ever seen.
It is on the plane to Morocco that events take an unexpected turn, when Aziz, pressed for details of a "birthplace" that isn't his, invents the fabulous story of Irghiz, a valley paradise hidden from the world and now in danger of ruin. From this moment on, the attache forgets his original assignment and has only one mission: to return Aziz to the Eldorado he left behind and save it from the ravages of modern progress. So begins an initiatory journey that takes Aziz, Jean-Pierre, and a disabused aristocrat across a desert both real and mythic, pursuing a vision of happiness as elusive as Irghiz itself.
At once humorous and poignant, the story of this journey is "a beautifully realized blend of sensitivity, humor, intelligence, and good sense a rich and engaging novel, filled with a lucid and compassionate humanity" (Jean-Claude Lebrun).

Didier van Cauwelaert is the author of numerous bestselling books, including "Poisson d'Amour," "La Vie Interdite," and "Rencontre Sous X" (forthcoming in English from Other Press). He wrote a libretto that was featured in the recent off-Broadway musical, "Amour." He lives in Paris.
or
Not Currently Available for Direct Purchase
Copyright © 2020 American Booksellers Association