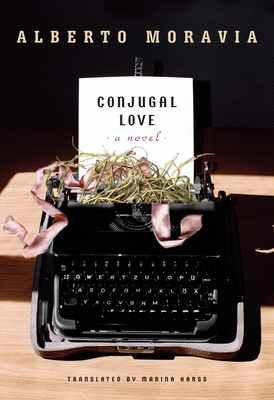 To begin with I’d like to talk about my wife. To love means, in addition to many other things, to delight in gazing upon and observing the beloved.
--From Conjugal Love

When Silvio, a rich Italian dilettante, and his beautiful wife agree to move to the country and forgo sex so that he will have the energy to write a successful novel, something is bound to go wrong: Silvio’s literary ambitions are far too big for his second-rate talent, and his wife Leda is a passionate woman. This dangerously combustible situation is set off when Leda accuses Antonio, the local barber who comes every morning to shave Silvio, of trying to molest her. Silvio obstinately refuses to dismiss him, and the quarrel and its shattering consequences put the couple’s love to the test.

Praise For Conjugal Love: A Novel…

Italian stylist Moravia (1907–1990) had his novels The Conformist and Contempt filmed by Bertolucci and Godard, respectively; this novel, freshly translated by Harss (who provides a short note), was written in 1949.

Moravia...achieves a sly, convincing portrait in the voice of Silvio, whose love for Leda emasculates him, yet fuels his work.

In this brief novel, celebrated Italian novelist Moravia probes many issues, including literary inspiration, the effect of a muse on both creativity and self-discovery, and the possibilities of platonic and conjugal love.

Boasting a fluid style that is elegant yet simple, Moravia is a master of writing about men and women and their love lives.

Alberto Moravia crafts a delectably arch tale of a wealthy dilettante and his sensually neglected wife.

Michael Dirda
Reading Alberto Moravia's Conjugal Love will take only a couple of hours -- fortunately. For once you start this intense short novel, you won't be able to turn your eyes away....

Marina Harss's English carries us smoothly into Silvio's mind, as he reflects on his art and on his wife until each gradually grows into an aspect of the other.

A short, first-person novel, such as Conjugal Love, is frequently the genre of confession and confusion, of emotional uncertainty and torment. And not just for the protagonist. The reader, unable to gain any viewpoint on events except through the narrator's consciousness, experiences a peculiar claustrophobia, trapped in the mind of a madman -- or of a poor doomed innocent en route to the slaughterhouse. Slowly we begin to suspect terrible things, but it takes a long time before we actually know.

A wealthy, idle man with literary aspirations retreats to an isolated villa in Tuscany with his new wife, where they make a pact: to abstain from sex until he finishes writing a story. The only intrusion is a local barber, who arrives daily to give the husband a shave and possibly put the moves on the wife. In other hands, these would be the ingredients of farce, but Moravia, who died in 1990 and is considered one of the preëminent Italian writers of the twentieth century, delivers something at once more bitter and more tender: a parable of marriage, that odd mixture of violent devotion and legitimate lust, in which desire eventually gives way to a forced and decorous composure that captures the essential opacity of even one's most intimate partner.

Caroline McCloskey
Alberto Moravia's Conjugal Love is a short novel whose surface clarity shellacs over its shriekingly bizarre underpinnings. When the book was published in 1951, the Italian author was well known for his moody portraits of sexuality, and this excellent new translation shows why.

All the usual Moravian themes are present and accounted for: the perverse psychosexual dynamics; the ways in which even our intimates are unknowable to us; the existential brooding on isolation and illusion—all set against the elegant tableaux of the leisure class. Silvio, with his vague aspirations and idle existence, is a classic dilettante. His ideas about love and art are initially benign, even endearing. By the book's end, however, Silvio's naïveté has morphed into something far more alarming. He’s not just insulated from struggle, but from reality.

Moravia... is a master storyteller and his political commentary never overpowers his narrative. The beauty of Conjugal Love is that, politics aside, it can be read simply as a compelling tale of love and betrayal.

Silvio's very open, almost confessional style—he reveals (and seems to almost revel in) warts and all—is very appealing and makes the story all the more convincing. Conjugal Love is not a happy tale, but it is a satisfying one. And very well told. Recommended.

Carol Herman
To read Alberto Moravia's Conjugal Love is to be transported to the lush landscape of 1930s Tuscany. But the pleasure that comes from this amazing little book rests squarely with Silvio, the beguiling protagonist who leads readers to the story's central conceit...

Read this terrific book. It will make you want to say something kind to someone you love.

Alberto Moravia, born in Rome in 1907, was one of the greatest Italian writers of the twentieth century. His novels, which include The Woman of Rome, The Conformist, Contempt, and Two Women, have been turned into films by Bernardo Bertolucci and Jean-Luc Godard. He died in 1990.

Marina Harss translations include For Solo Violin (Per Vionlino Solo), a war memoir by Aldo Zargani, and stories in The Forbidden Stories of Marta Veneranda, by Sonia Rivera-Vald. Her translations have also appeared in Bomb, Brooklyn Rail, and Autadafe. She is a researcher at The New Yorker, and lives in New York City.
Also by this author: A Week in October, Stories from the City of God
Loading...
or support indie stores by buying on