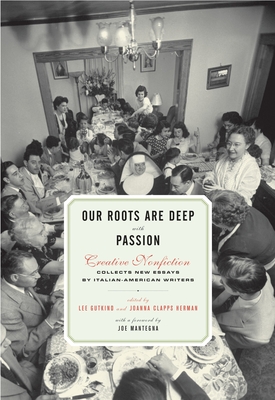 Our Roots Are Deep with Passion

Thoughtful, poignant, and hilarious personal essays collected by the editors of Creative Nonfiction explore the meanings of Italian-American identity.

In the twenty-one nonfiction narratives collected in Our Roots Are Deep with Passion, established and emerging writers with family ties to Italy reflect on the ways that their lives have been accented with uniquely Italian-American flavors. Several of the essays breathe new life into the time-honored theme of family—Louise DeSalvo honors her grandfather, nick-named “the drunk” because he spent his life of hard work drinking wine instead of water, and James Vescovi portrays the close of the stormy relationship between his father and grandmother. Other stories tackle the mystical side of Italian-American life, like Laura Valeri’s account of a summer vacation séance in Sardinia that goes eerily awry. And elsewhere, Stephanie Susnjara charts the history of garlic in society and her kitchen, and Gina Barreca offers an unabashed confession of congenital jealousy.

Lee Gutkind, founding editor of Creative Nonfiction, the nation’s premier nonfiction prose literary journal, and Joanna Clapps Herman have brought together artful essays by novelists, scholars, critics, and memoirists from across the country. The pieces are as varied as their authors, but all explore the unique intersections of language, tradition, cuisine, and culture that characterize the diverse experience of Americans of Italian heritage.

Praise For Our Roots Are Deep with Passion: New Essays by Italian-American Writers…

This collection of essays on being Italian-American (or in some cases, an Italian in America or an American in Italy) is filled with imagery and topics of not only food and wine but Catholicism, immigration and linguistics. In a poetic tale of family and forced immigration with Catholic and culinary undertones, Louise DeSalvo's " 'MBriago" is the collection's opener as well as a literary high point. In "Sacrifice," Maria Laurino writes of an Italian-American who sacrifices her life to care for her disabled son; Edvige Giunta describes her native Sicily in "The Walls of Gela." Almost every essay in the collection explores the notion of someone surrendering a major part of themselves (their homeland, their identity, their childhood, their Saturday afternoons, their happiness) for the greater good of their family. The stories are inspiring, but they also give the collection a bittersweet flavor. In the end, this welcome collection challenges preconceived notions about Italian-Americans.

Being Italian-American is more than just your nonna's bolognese, First Communion and colorful Soprano-speak. A leading literary journal has collected 22 essays (and a foreword by actor Joe Mantegna) on unexpected subjects, from a father's accordion to a lesbian wedding, Italian-style.

The stories of Italian-Americans in smokey social halls, braiding hard boiled eggs into dough, hands deep in the fecund earth of the garden and always, it seemed, always in the kitchen are stories that are singular and communal, like Italian-Americans themselves.

This thoroughly enjoyable and instructive essay collection also serves as Volume 30 of the literary journal Creative Nonfiction. Gutkind (founding editor, Creative Nonfiction) and Herman (creative writing, Manhattanville Coll.) either performed their editing duties superbly, had an enormous pile of writing talent from which to pick, or some combination of both circumstances judging from the engrossing results....Essential...engaging...and highly recommended

With nary a stereotype in sight, but with plenty of commentary about living hyphenated in America, 21 writers tell their stories about a life based on language, connections, similarities and differences. Some stories are sweet, some are cruel, but all are Italian-American, with the attendant overtones of living large just slightly apart from the mainstream...

[Editors] Gutkind and Herman largely let the authors, including Louise DeSalvo, Mary Beth Caschetta, Edvige Giunta and Sandra Gilbert speak for themselves, hyphens, pasta and all.

...a moving assortment of works by Italian-American writers.

The complexity of each author's experience reveals the futility of brief definition and instead provides a rich understanding for readers, whether they are entering this culture for the first time or returning to their own memories.

...this collection is a display of character, sensation, and drama told with captivating sincerity in essays ripe with themes of family, gender, hardship, strength, love, jealousy, magic, and food, while revealing qualities of community, connection, and culture. These compelling stories shift as much in theme as in voice and style. The layered voices and stories are united in the Italian-American experience, but each is unique in the author's telling.

The collection does not expose a defined cultural experience, but rather a world culture that is merging and moving. The essays are an intersection of old and new, of Italian and American. They are a dialogue with the Italian and the American, and with the hyphen between them.

...funny, sad, moving, complex, and challenging...These writings remind readers to remember and be grateful for their ethnic roots.

Lee Gutkind, proclaimed ‚"the Godfather behind creative nonfiction‚" by Vanity Fair, is a professor of English at the University of Pittsburgh. He is the author of eight books, including Forever Fat: Essays by the Godfather.
Loading...
or
Not Currently Available for Direct Purchase