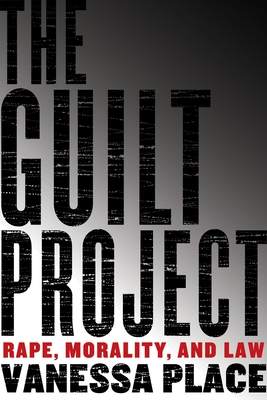 An English court in 1736 described rape as an accusation “easily to be made and hard to be proved, and harder to be defended by the party accused, though never so innocent. ”To prove the crime, the law required a woman to physically resist, to put up a “hue and cry,” as evidence of her unwillingness. Beginning in the 1970s, however, feminist and victim-advocacy groups began changing attitudes toward rape so the crime is now seen as violent in itself: the legal definition of rape now includes everything from the sadistic serial rapist to the eighteen-year-old who has consensual sex with a fourteen-year-old.

This inclusiveness means there are now more rapists among us. And more of rape’s camp followers: the prison-makers, the community watchdogs, law-and-order politicians, and the real-crime/real-time entertainment industry. Vanessa Place examines the ambiguity of rape law by presenting cases where guilt lies, but lies uneasily, and leads into larger ethical questions of what defines guilt, what is justice, and what is considered just punishment. Assuming a society can and must be judged by the way it treats its most despicable members, The Guilt Project looks at the way the American legal system defines, prosecutes, and punishes sex offenders, how this Dateline NBC justice has transformed our conception of who is guilty and how they ought to be treated, and how this has come to undo our deeper humanity

Praise For The Guilt Project: Rape, Morality and Law…

“A California appellate attorney looks at crime and punishment under our sex laws… Place expands the notion of guilt, examining its other dimensions—factual, ethical, moral—and asks whether we’ve allowed dubious science, conflicting cultural messages and out-of-control political passions to distort our sex laws...Place detects something desperate in all this, and in richly allusive, frequently witty prose, she asks important questions about what it is exactly we want from our criminal laws. A sophisticated, brave look at a topic that too often provokes merely panic, prejudice and posturing.”—Kirkus Reviews

"A brilliant criminal defense attorney, Vanessa Place has produced a deeply personal yet meticulously researched argument that demands serious consideration by policy makers, journalists, social scientists, and informed citizens. For some, her book will inspire a thorough rethinking of how they understand rapists and their places in the criminal justice system. For others, the candid accounts and bold proposals in The Guilt Project will inspire mainly frustration or even anger. But no honest reader can deny the special insights she provides from her years of experience and careful reflection."—Barry Glassner, author of The Culture of Fear and Professor of Sociology, University of Southern California

"Judging by The Guilt Project, Vanessa Place is one tough defense attorney, though her wicked prose implies at times the soul of an angry poet. Her thesis that injustice is routinely perpetrated on sex criminals will not be popular—which is why her book should be read by anyone interested in criminology, specifically including legislators, judges, attorneys and prosecutors." —Robert Mayer, author of The Dreams of Ada: A True Story of Murder, Obsession, and a Small Town

Vanessa Place is a writer and criminal appellate attorney practicing in Los Angeles. She has worked on the appeals of more than a thousand indigent felons, specializing in sex offenders and sexually violent predators. She is the author of Dies: A Sentence, a fifty-thousand-word, one-sentence prose poem; the post-conceptual novel La Medusa; and, in collaboration with appropriation poet Robert Fitterman, Notes on Conceptualisms. Place is co-founder of Les Figues Press, described by critic Terry Castle as “an elegant vessel for experimental American writing of an extraordinarily
assured and ingenious sort.”
Loading...
or
Not Currently Available for Direct Purchase