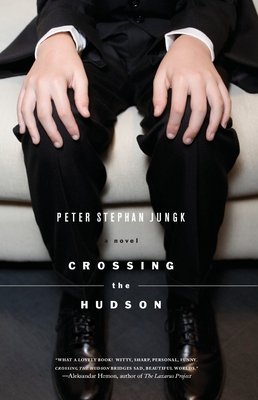 Gustav Rubin, a fur dealer in Vienna, flies to New York to spend the summer with his wife and two young children in a lake house north of the city. When he arrives late at JFK, he is met by his opinionated, unrelenting mother, Rosa. They rent a car and set out for Lake Gilead. But Gustav loses his way, and son and mother end up on the wrong side of the river. Trying to find the right route north, they become trapped on the Tappan Zee Bridge in the traffic jam of all traffic jams– a truck transporting toxic chemicals has turned over–and Gustav and Mother remain gridlocked high above the Hudson River. Gustav begins to think of his beloved father, a renowned intellectual, now eleven months dead. Then, in a surprising, highly original twist worthy of Kafka, both Gustav and Mother see the body–"the colossal, golem-like fatherbody"
– of Ludwig David Rubin floating naked in the waters below.

Jungk gives a profound meditation on a Jewish family and its past, especially the lasting distorting effects on a son of a famous, vital father and a clinging, overwhelming mother, and of the differences between the generation of European intellectual refugees who arrived in the United States during the Second World War and the children of that generation.


Peter Stephan Jungk was born in Los Angeles, raised in several European cities, and now lives in Paris. A former screenwriting fellow of the American Film Institute, he is the author of eight books, including the acclaimed biography Franz Werfel: A Life from Prague to Hollywood (1990) and the novels Tigor (Handsel Books, 2004), a finalist for the British Foreign Book Award, and The Perfect American (Handsel Books, 2004), a fictional biography of Walt Disney's last months, which had its premiere as an opera by Philip Glass at Madrid's Teatro Real in January 2013.

David Dollenmayer
David Dollenmayer is Professor of German at Worcester Polytechnic Institute and the author of The Berlin Novels of Alred Doblin. He is the recipient of the 2008 Helen and Kurt Wolff Translator's Prize. He lives in Hopkinton, Massachusetts.
Also by this translator: The Road to Rescue, The King of Corsica, House of Childhood

Praise For Crossing the Hudson: A Novel…

“The details in Crossing the Hudson [give] this novel about the troubled generations of a post-War Jewish family a verisimilitude that draws readers in...Jungk’s telling of the story is irresistible.”

“[The characters] are suspended between Europe and America, a Jewish family’s past and present, in this novel that features a Kafka-like event on the Tappan Zee Bridge.”

“Brilliantly blending reality and fantasy, Peter Stephan Jungk has written an intriguing novel...set forth with great wit and skill."

"[A] great work in translation."
or
Not Currently Available for Direct Purchase
Copyright © 2020 American Booksellers Association