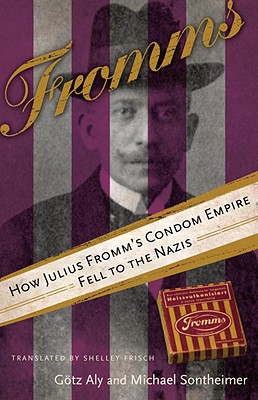 How Julius Fromm's Condom Empire Fell to the Nazis

If you wanted to buy a top-quality condom in prewar Germany, you bought Fromms Act, the first brand name condom and still a leading brand in the German market. The man behind this "pure German quality product" was Julius Fromm, a Jewish entrepreneur who had immigrated from Russia as a child. Fromm was in the right place at the right time: he patented Fromms Act in 1916, when the combination of changing sexual mores, awareness of sexual health, and the lack of reliable prophylactics meant a market primed for his product. In 1922 he began mass production and opened international branches. Sixteen years later, after building the brand into a best seller and the company into a model business, he was forced to sell Fromms Act for a fraction of its worth to a German baroness. In 1939 he emigrated to London.
Aly and Sontheimer trace Fromm's rise and fall, illuminating the ways Jewish businesses like his were Aryanized under the Nazis. Through the biography of this businessman and the story of his unusual and fabulously successful company, we learn the fascinating history of the first branded condoms in Germany and the sexual culture that allowed them to thrive, the heretofore undocumented machinations by which the Nazis robbed German-Jewish families of their businesses, and the tragedy of a man whose great love for the adopted country that first allowed him to succeed was betrayed by its government and his fellow citizens.
This captivating account offers a wealth of detail and a fresh array of photographic documentation, and adds a striking new dimension to our understanding of this dark period in German history.


Praise For Fromms: How Julius Fromm's Condom Empire Fell to the Nazis…

“Aly and Sontheimer meticulously follow the story of [the Fromm family]….With Fromms, we see a little-known history of a family which would otherwise be forgotten. With a sense of compassion, the authors try to set the record straight, writing, ‘Julius Fromm had fallen prey to the robbers. These were not a bunch of bandits in the bushes, however, but a state and its citizens.’”—Chicago Sun-Times

“Condoms, sex, Judaism, not to mention scandal, salaciousness, and socialism…all chronicled in the new book Fromms: How Julius Fromm's Condom Empire Fell to the Nazis… it’s hard to deny that Julius Fromm is still a captivating and fascinating footnote in Holocaust history that deserves his own story.”—The Daily Beast

“Few German Jews possessed more in material wealth than the entrepreneur Julius Fromm…Fromms: How Julius Fromm's Condom Empire Fell to the Nazis…tell[s] how Fromm became a household name, and how his company was commandeered by the Nazi regime.”—The Chronicle of Higher Education

"The condom–that lowly, indispensable, and still hotly contested object–is not only one of the great inventions of all time but also provides a crucial clue to the ultimately devastating triangular relationship between Jews, Christians, and Nazis in 1930s Germany. This riveting, brilliant little book offers profound new insights into the tangled mess of gentile greed, corruption, anti-Semitism, and ambivalence about sexual freedoms that explains so much about the Third Reich's rise and murderous trajectory."
–Dagmar Herzog, author of Sex in Crisis: The New Sexual Revolution and the Future of American Politics

"Serious, ironic, sarcastic, with a deep moral outrage that shines through every page, and does not need to be made explicit through sermonizing. The book traces the history of an East European Jewish family that became German in language, culture, and outlook, and that built a manufacturing empire producing condoms, a salacious detail that makes it possible for Aly and Sontheimer to be provocative, forthright, and convincing. Fromm was serious, responsible, full of social ideals, and at the same time an excellent entrepreneur who looked after his workers well. The slow liquidation of his possessions and establishments by the Nazis is described in well-researched detail. But the second part of the book is no less impressive: it follows, in painful detail, the way postwar German governments in both German states cheated, lied, and prevaricated toward Fromm's heirs, in order to not pay out the restitution that the family quite clearly was entitled to. The book deals with Jews, and with German society before, during, and after the Nazi period. A gem of a book."
–Yehuda Bauer, Professor of Holocaust Studies, the Hebrew University of Jerusalem

Gotz Aly Gotz Aly is a freelance journalist and historian living in Berlin. He is the author of numerous scholarly works on the Holocaust and was the 2004 2006 visiting professor for interdisciplinary Holocaust research at the Fritz Bauer Institut in Frankfurt am Main. Michael Sontheimer Michael Sontheimer is a correspondent for Der Spiegel and has appeared as a commentator on NPR and CNN International. In addition to his work in newspapers and magazines, he has written nine books on politics. Shelley Frisch Shelley Frisch, who holds a doctorate in German literature from Princeton University, is author of The Lure of the Linguistic and translator of numerous books from the German, including biographies of Nietzsche, Einstein, and Kafka, for which she was awarded the 2007 Modern Language Association Translation Prize for a Scholarly Study of Literature. She lives in Princeton, New Jersey."
Loading...
or
Not Currently Available for Direct Purchase