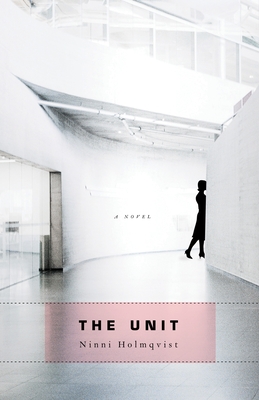 "I enjoyed The Unit very much...I know you will be riveted, as I was." —Margaret Atwood on Twitter

A modern day classic and a chilling cautionary tale for fans of The Handmaid's Tale. Named a BEST BOOK OF THE MONTH by GQ.

“Echoing work by Marge Piercy and Margaret Atwood, The Unit is as thought-provoking as it is compulsively readable.” —Jessica Crispin, NPR.org

Ninni Holmqvist’s uncanny dystopian novel envisions a society in the not-so-distant future, where women over fifty and men over sixty who are unmarried and childless are sent to a retirement community called the Unit. They’re given lavish apartments set amongst beautiful gardens and state-of-the-art facilities; they’re fed elaborate gourmet meals, surrounded by others just like them. It’s an idyllic place, but there’s a catch: the residents—known as dispensables—must donate their organs, one by one, until the final donation. When Dorrit Weger arrives at the Unit, she resigns herself to this fate, seeking only peace in her final days. But she soon falls in love, and this unexpected, improbable happiness throws the future into doubt.

Praise For The Unit: A Novel…

“Echoing work by Marge Piercy and Margaret Atwood, The Unit is as thought-provoking as it is compulsively readable.” --Jessa Crispin, author of Why I Am Not a Feminist

“A haunting, deadpan tale set vaguely in the Scandinavian future…Holmqvist’s spare prose interweaves the Unit’s pleasures and cruelties with exquisite matter-of-factness…[Holmqvist] turns the screw, presenting a set of events so miraculous and abominable that they literally made me gasp.” --The Washington Post

“This haunting first novel imagines a nation in which men and women who haven’t had children by a certain age are taken to a “reserve bank unit for biological material” and subjected to various physical and psychological experiments, while waiting to have their organs harvested for “needed” citizens in the outside world… Holmqvist evocatively details the experiences of a woman who falls in love with another resident, and at least momentarily attempts to escape her fate.” --The New Yorker

“Holmqvist handles her dystopia with muted, subtle care...Neither satirical nor polemical, The Unit manages to express a fair degree of moral outrage without ever moralizing…it has enough spooks to make it a feminist, philosophical page-turner.” --TimeOut Chicago

“This is one of the best books I’ve read over the past two years...Thought-provoking and emotionally-moving, The Unit is a book you’ll be discussing with others long after you’re done reading it.” --Orlando Sentinel

"Chilling…stunning…Holmqvist’s fluid, mesmerizing novel offers unnerving commentary on the way society devalues artistic creation while elevating procreation, and speculation on what it would be like if that was taken to an extreme. For Orwell and Huxley fans." --Booklist

"Like Margaret Atwood’s The Handmaid’s Tale, this novel imagines a chilling dystopia: single, childless, midlife women are considered dispensable. At 50 the narrator, Dorrit, is taken to a facility where non-vital organs will be harvested one by one for people more valued by society; she knows that eventually she’ll have to sacrifice something essential’ like her heart. Dorrit accepts her fate–until she falls in love and finds herself breaking the rules." --More Magazine

Ninni Holmqvist was born in 1958 and lives in Skåne, Sweden. She made her debut in 1995 with the short story collection Suit [Kostym] and has published two further collections of short stories since then. She also works as a translator. The Unit marks Holmqvist’s debut as a novelist.

Marlaine Delargy has translated novels by John Ajvide Lindqvist, Kristina Ohlsson, and Helene Tursten, as well as The Unit by Ninni Holmqvist (Other Press) and Therese Bohman’s Drowned (Other Press). She lives in England.