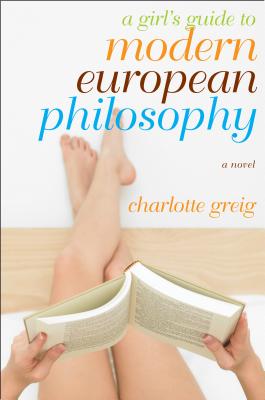 Susannah’s official boyfriend, Jason, is the perfect foil for her student lifestyle. He is ten years older, an antiques dealer, and owns a stylish apartment that prevents her from having to live in the seedy digs on campus. This way, she can take her philosophy major very seriously and dabble in the social and sexual freedom of 1970s university life. But circumstances become more complicated than Susannah would like when she begins to have an affair with her tutorial partner, Rob. Soon she is dating two men, missing her lectures, exploring independence and feminism with her girlfriends, and finding herself in a particularly impossible dilemma: she becomes pregnant. Forced to look beyond her friends and lovers for support, she finds help and inspiration from the lessons of Kierkegaard and other European philosophers.

A Girl’s Guide to Modern European Philosophy is a delightfully insightful, bittersweet coming-of-age romp, in which love is far from platonic and the mind—body predicament a pressing reality. It even succeeds where many introductions to philosophy have failed, by effortlessly bringing to life the central tenets of the most important European philosophers of modern times.

Charlotte Greig worked as a music journalist in print and radio before becoming a folk singer and songwriter. She has made five albums and written a book on girl groups, Will You Still Love Me Tomorrow?: Girl Groups from the 50s On. She is also a playwright, for radio and stage. She lives in Cardiff, Wales, U.K., with her family. A Girl’s Guide to Modern European Philosophy is her first novel.

Praise For A Girl's Guide to Modern European Philosophy: A Novel…

Entertainment Weekly
Ignore the breezy title and coy, crossed-ankles cover; beneath its slick chick-lit veneer, Charlotte Greig's novel, A Girl's Guide to Modern European Philosophy, is a ruminative coming-of-age tale devoid of the genre's usual tropes. Caught at the crest of feminism's second wave, 20-year-old philosophy major Susannah partakes of the freedoms of the 1970s — campus protests, sex with both her older boyfriend and a fellow student — but when her world suddenly capsizes, she retreats to the men on the pages of her textbooks: Nietzsche, Heidegger, Kierkegaard.

Amanda Heller, The Boston Globe
This intriguingly titled novel carries us back to Ye Olde Swinging England, circa 1970, those bygone days of bell-bottoms and non-portable telephones. Susannah Jones, the ‘girl’ in question, is a university student haphazardly studying philosophy while actually majoring in boyfriends… It's a premise that suggests a kooky comedy of manners.

ForeWord Magazine
[This] coming-of-age book will teach the reader something about the practical applications of philosophy. For readers who survived the seventies–and may possibly remember those days–it will also be an entertaining read.

Publishers Weekly
In her first novel, singer-songwriter and music journalist Greig examines the case of second-year philosophy student Susanna, who frequently wakes up, screaming, from disconcerting dreams. It’s not so much the demands of her course load at the University of Sussex—Heidegger, Kierkegaard, Freud and friends—as it is Susanna’s own experience with Nietzsche’s “great separation,” or the sudden realization that “everything... means nothing to you.” Her boyfriend, Jason, an antiques dealer 10 years her senior, is stingy with affection. Which helps explain why Susanna falls for Rob, a brooding yet innocent-seeming classmate who frequents the dingy campus bars, digs a good protest and lives in dilapidated communal housing. Torn, Susanna opts to date both—it’s the swinging ’70s, after all—but the back-and-forth leaves her dizzy, and when she discovers she’s pregnant and realizes the father could be either man, neither her tutor nor her girlfriends can assuage her. Fumbling through the smoky corridors and lofty ideals of academia, Susanna is, like so many student philosophers, equal parts endearing and insufferable, and even if her dilemma isn’t the most original, Greig makes it uniquely hers.

A distinctive coming-of-age tale from a talented debut novelist based in the U.K. Susannah Jones studies philosophy at Sussex University. She lives with Jason, an antiques dealer whose Brunswick Square flat offers a welcome respite from 1970s-era student squalor. Jason’s almost 30, and he provides Susannah with access to a more sophisticated lifestyle. But he treats her more like a child or a pet than the liberated woman she would like to be—or, for that matter, the thoughtful, earnestly questing person she already is. Their relationship is additionally complicated by Rob, a fellow student whose obvious interest Susannah finds herself reciprocating. She fumbles along with both men until an unplanned pregnancy forces her to make some serious, irrevocable choices. In broad outline, Greig’s debut looks a lot like chick lit. Few entries in that genre, however, are so intelligent, sincere and skillfully executed. Susannah can be as dizzy as Bridget Jones, and her youthful confusion gives the novel much of its screwball charm. But she is also utterly serious about philosophy, and the author’s use of choice excerpts from great thinkers of the modern age sets this book apart. In one passage, Greig captures both the exquisite insecurity of adolescence and its desire for radical freedom and individuality by juxtaposing excerpts from Nietzsche with a description of Susannah cultivating a perfectly careless bohemian look through hours of careful labor. In another, Kierkegaard provides a heartbreaking counterpoint while Susannah decides whether or not to go through with an abortion. The author further enriches her novel with fully formed, sympathetically delineated secondary characters. Neither Jason nor Rob is a perfect hero, and neither is a complete cad. Susannah’s friends are real people rather than social accessories. The uncertain ending may not satisfy those who read for escape, but it certainly feels true. Women’s fiction that expects an intellectually adventurous and emotionally honest reader.
or
Not Currently Available for Direct Purchase
Copyright © 2020 American Booksellers Association