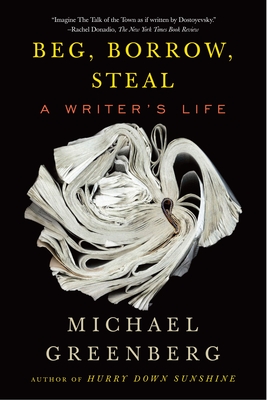 In Beg, Borrow, Steal Michael Greenberg regales us with his wry and vivid take on the life of a writer of little means trying to practice his craft or simply stay alive. He finds himself doctoring doomed movie scripts; selling cosmetics from an ironing board in front of a women's department store; writing about golf, a game he has never played; and botching his debut as a waiter in a posh restaurant.

Central characters include Michael's father, whose prediction that Michael's "scribbling" wouldn't get him on the subway almost came true; his artistic first wife, whom he met in a Greenwich Village high school; and their son who grew up on the Lower East Side, fluent in the language of the street and in the language of the parlor. Then there are Greenberg's unexpected encounters: a Holocaust survivor who on his deathbed tries to leave Michael his fortune; a repentant communist who confesses his sins; a man who becomes a woman; a Chilean filmmaker in search of his past; and rats who behave like humans and cease to live underground.

Hilarious and bittersweet, Greenberg's stories invite us into a world where the familial, the literary, the tragic and the mundane not only speak to one another, but deeply enjoy the exchange.

"Greenberg, a native New Yorker, loves the city as a child loves a parent, and in its honor he has put together a collection of tightly written incisive chapters, each another tessera or tile in a big mosaic…Greenberg is an acute observer (if 'acute' is defined as sharp, sensitive, even painful)."—Edmund White, The New York Times Book Review

"The short pieces in Beg, Borrow, Steal are in the tradition of the literary-journalistic essays that Europeans call feuilletons. Although flexible, this form requires skill and concision, and Michael Greenberg uses it brilliantly. Personal experience is at the center of each piece, but none is solipsistic; the tone is understated and ironic, and every essay contains a hard-won glimmer of insight… Greenberg is a poet of New York, evoking in these fleeting pieces the city in all its scuffed and squalid grandeur."—Juliet Wittman, The Washington Post

"[A] terrific new collection…. It is as though Bellow or Alfred Kazin were transported to post-millennial New York, bringing their toughness and romanticism to bear on our softer and more familiar world…. This book, with its intrepidity, humor, and dark insight, offers its own, irrefutable justification for the 'writer's life.'"—Adam Kirsch, Tablet

“Beg, Borrow, Steal is a delightful journey through a well-lived life in New York City. The 44 chapters-once-columns stand alone and yet, pulled together, flow like a river of many surprises…The more I read of Greenberg's life, the more I wanted to keep reading. The chapters are short, up to 5 pages each, and loud with wit, wisdom and irony. Many are simply perfect.”—Kassie Rose, WOSU Radio

“Darkly comic…Most of Greenberg's tales are set in New York City, where he is often an endearingly hapless companion… [His] gifts as a storyteller—his spare style, shrewd use of detail, easy way with unpredictable references…lack of sentimentality, and sense of the surreal in the ordinary—are evident throughout the book, whether recounting adventures in South America, or observing a New York City street scene.”—The New York Review of Books

“[Beg, Borrow, Steal] amounts to a history of a man from nowhere determined to be, and continuing to be, a writer no matter what….Greenberg’s unsparing, ferric style of truth telling [is] direct, unbuffered, sharp-edged….He was variously a peddler of cosmetics and fire alarms, cab driver and chauffeur, Spanish teacher and court interpreter, furniture mover, bookstore clerk, mail sorter, waiter, and hack writer, all pursuits providing subjects for these essays in which the quotidian is illuminated and refracted through a cool, audacious eye.”—Boston Globe

"Greenberg's book is an important reminder to writers that they don't need to write 'important' stories, but rather, they need to give each story importance."—Carol Hoening, The Huffington Post

“Beg, Borrow, Steal is a series of reflections on the hardships, delights, and moral dilemmas one encounters when trying to get through life primarily by means of stringing words together. As a stylist…Greenberg is at the top of his form… He has the rare ability to say exactly what he needs to say in order to make the story work and, at the same time, to give his sentences a felicitous rhythm that doesn’t call attention to itself.”—The New Criterion

"Beg, Borrow, Steal: A Writer's Life will become a bestseller today and a classic inspiration tomorrow. Just as people carried Kerouac and Bellow in their back pocket, Greenberg's conversational tone stays with you, and you want to read his essays again and again….We hope by now, with thousands of Hurry Down Sunshine fans ready to read Beg, Borrow, Steal, that Greenberg will be motivated to keep observing, writing, and counting us among his grateful audience."—Blogcritics.org

"Quietly elegant, effortless, valuable, and perfectly crafted, like gems or teardrops…[Greenberg writes] the way Chagall would make a stained-glass window, using familiar materials and skills to create something delicate and undeniable and new."—Bookslut.com

"In these 45 thoughtfully crafted short essays written for London's Times Literary Supplement from 2003 to 2009, Greenberg (Hurry Down Sunshine) touches on his decades of trying to make good as a writer in New York City...These are graceful ponderings by a deeply sympathetic soul, a consummate New Yorker and terrific writer."—Publishers Weekly

“Greenberg’s [Times Literary Supplement] editor gave him simple instructions: for each piece, spill a drop of blood, give it a sense of urgency….Greenberg skillfully meets his editor’s requirements and seems to have carefully and artfully selected words and constructed sentences for maximum impact….His narratives, which mostly take place in New York City, include an entertaining cast of characters and span from his youth in the 1970s through marriage and raising his own children to the near present day, with the underlying theme of a writer eking out a living by any means possible and, in turn, living a full life.”—Library Journal

"Beg, Borrow, Steal is a writing memoir that belongs in the company of like classics such as Grace Paley's Just as I Thought, Annie Dillard's Living by Fiction, William Gass's Fiction and the Figures of Life, and Eudora Welty's One Writer's Beginnings…What is often thought of as an intangible, cerebral activity—writing—is made palpable in this book."—ForeWord Magazine

"Greenberg's descriptions of his encounters with mentors, his dealings with the movie world and his endless family dramas are rendered with biting humor and insight. The unflinching stories are so well written, readers will wince."—Florida Times-Union

A native New Yorker, Michael Greenberg is the author of the memoir Hurry Down Sunshine (Other Press, 2008), published in sixteen countries and chosen as one of the best books of 2008 by Time, the San Francisco Chronicle, Amazon.com, and Library Journal. He is a columnist for the Times Literary Supplement. His writing has appeared in such varied places as O, The Oprah Magazine and The New York Review of Books. He lives in New York.
Loading...
or
Not Currently Available for Direct Purchase