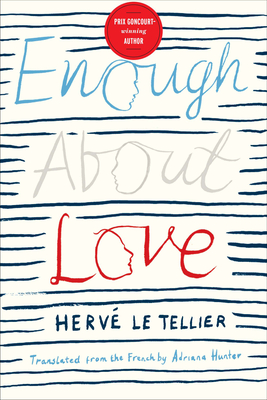 A Novel by the Bestselling Author of The Anomaly

Any man—or woman—who wants to hear nothing—or no more—about love should put this book down.

Anna and Louise could be sisters, but they don’t know each other. They are both married with children, and for the most part, they are happy. On almost the same day, Anna, a psychiatrist, crosses paths with Yves, a writer, while Louise, a lawyer, meets Anna’s analyst, Thomas. Love at first sight is still possible for those into their forties and long-married. But when you have already mapped out a life path, a passionate affair can come at a high price. For our four characters, their lives are unexpectedly turned upside down by the deliciously inconvenient arrival of love. For Anna, meeting Yves has brought a flurry of excitement to her life and made her question her values, her reliable husband, and her responsibilities to her children. For Louise, a successful career woman in a stable and comfortable marriage, her routine is uprooted by the youthful passion she feels for Thomas. Thought-provoking, sophisticated, and, above all, amusing, Enough About Love captures the euphoria of desire through tender and unflinching portraits of husbands, wives, and lovers.

Praise For Enough About Love: A Novel by the Bestselling Author of The Anomaly…

“Enough About Love is awfully cute. It is also absorbing and witty, and the more impressive for its formal constraints.” —Lorin Stein, Harper’s Magazine

“What could be more romantic than falling in love in Paris? Unless you are already married, in which case it’s a little more complicated, as in Hervé Le Tellier’s Enough About Love …Le Tellier writes about middle-aged desire and its consequences with empathy and humor.” —Washington Post

“It is a complicated novel, artfully told and translated and eerily familiar, the way love stories so often are.” —Los Angeles Times

“At least as intriguing as how the French make their bread taste so good is how they manage all those extramarital love affairs they’re said to have.” —The New York Times

“It’s a French intellectual sex romp, an updated Bob & Carol & Ted & Alice if they had Lacan, Queneau, and Barthes on their analysts’ shelves…Fluidly translated by Adrianna Hunter, Enough About Love graphs love’s disruptive geometries in a playful manner.” —Bomb Magazine

“The prologue warns, ‘Any man — or woman — who wants to hear nothing — or no more — about love should put this book down.’ We’ll be surprised if it leaves your hands.” —Daily Candy

“This is a book about love, certainly, but it is also a book about love stories, and the way in which those stories play out according to their own logic. Watching Hervé Le Tellier conduct that process as he leads his characters in and out of love, one is reminded that literature, too, is an affair of the heart.” —World Literature Today

“A wise and witty writer, [Tellier] brings Parisian flair to this tale of romantic entanglement.” —BookPage

“A touching and thought-provoking study of attraction, responsibility, and love.” —Publishers Weekly

“Two love triangles (equal one love hexagon?) that reveal much—or at least enough—about love… Le Tellier examines the possibilities of love after 40, and he deals with this issue with patience, understanding and bemusement.” —Kirkus Reviews

“Both thoroughly complex and utterly simple...Middle-aged romance has rarely seemed so intriguing.” —Booklist

“Elegantly constructed, and with humor, wit, and touching honesty, Hervé Le Tellier tells a classic love story tweaked with a modern sensibility. I loved this intelligent and beguiling French novel, infused with that ‘Je ne sais quoi’ and a pleasure to read from the first page to the last.” —Katharine Davis, author of Capturing Paris

“A grab bag of luminous angles and viewpoints of the kaleidoscope of love.” —Marie Claire (France)

“If there was to be only one quintessential 'French novel' this fall, it should be this one.” —Elle (France)

“A novel that's full of surprises and strikes out against banality, cliches, and platitudes.” —Lire

Hervé Le Tellier is a writer, a journalist, a mathematician, a food critic, and a teacher.  He has been a member of the Oulipo since 1992 and one of the “papous” of the famous France Culture radio show. He is the author of more than twenty books. His latest publications include the short-story collection, The Sextine Chapel, and a novella, The Intervention of a Good Man, which earned him the Prix Guanahani.

Adriana Hunter studied French and Drama at the University of London. She has translated over forty books including works by Agnès Desarthe, Amélie Nothomb, Frédéric Beigbeder, Véronique Ovaldé, and Catherine Millet, and has been short-listed for the Independent Foreign Fiction Prize twice. She lives in Norfolk, England.