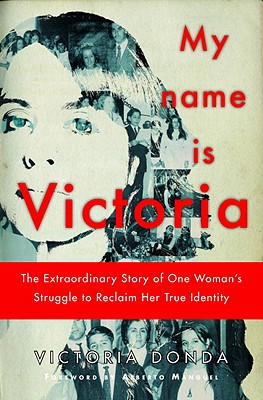 My Name is Victoria

Argentina’s coup d’état in 1976 led to one of the bloodiest dictatorships in its history—thirty thousand people were abducted, tortured, and subsequently “disappeared.” And hundreds of babies born to pregnant political prisoners were stolen from their doomed mothers and “given” to families with military ties or who were collaborators of the regime. Analía was one of these children, raised without suspecting that she was adopted. At twenty seven, she learned that her name wasn’t what she believed it to be, that her parents weren’t her real parents, and that the farce conceived by the dictatorship had managed to survive through more than two decades of democracy.
In My Name is Victoria, it is no longer Analía, but Victoria who tells us her story, in her own words: the life of a young and thriving middleclass woman from the outskirts of Buenos Aires with strong political convictions. Growing up, she thought she was the black sheep of the family with ideas diametrically opposed to her parents’. It wasn’t until she discovered the truth about her origins and the shocking revelation of her uncle’s involvement in her parents’ murder and in her kidnapping and adoption that she was able to fully embrace her legacy. Today, as the youngest member of congress in Argentina, she has reclaimed her identity and her real name: Victoria Donda. This is Victoria’s story, from the moment her parents were abducted to the day she was elected to parliament.

Praise For My Name is Victoria: The Extraordinary Story of one Woman's Struggle to Reclaim her True Identity…

“A compelling memoir by an Argentine writer who discovers that her mother was killed by the brutal military dictatorship—and that the man she thought was her father was part of the regime.” —O, The Oprah Magazine

“Donda deftly leads readers through Argentina’s Byzantine history of guerrilla groups, dictatorships, coups and military policies, providing a solid foundation for understanding the political and social upheavals underpinning her story…Donda’s captivating account of her surreal role in pulling back the curtain on one of the darkest periods of Argentine history merits a wide readership.” —Kirkus Reviews

“A powerful story of a woman who defies all odds and learns her true identity, and succeeds. Victoria Donda’s journey to claim her identity is exemplary, and refreshing. She represents a generational change and promise for Argentina. I highly recommend this book. You will come out stronger and full of optimism about life. The narrative is spellbinding.” —David Cox, CNN journalist, author of Dirty Secrets, Dirty War and Unveiling the Enigma: Who Stole the Hands of Juan Peron

“This extraordinary book is a gift from the generous heart and bright intellect of Victoria Donda, who was the 78th grandchild identified by the Grandmothers of Plaza de Mayo. Victoria’s triumph is to take us to the core of her resilience–her determination to fight for her dignity and her identity, while she leads the reader through the maze of Argentine politics and history. Empowered and empowering, My Name is Victoria sheds light on our quest to recover from a collective tragedy, to resist destruction at the hands of the powerful, to keep loving when an avalanche of hatred threatens our sanity.” —Alicia Partnoy, author of The Little School: Tales of Disappearance and Survival

Victoria Donda is a human rights activist and legislator. She is the first daughter of a disappeared person, born in captivity, to become a member of the Argentine National Congress. She is also the youngest woman to hold that office.

Magda Bogin is a novelist, translator, and journalist. She is the author of Natalya, God’s Messenger, and The Women Troubadours, and has published numerous translations, including House of the Spirits. Fluent in Spanish, English, French, Italian, and Russian, she is the founder and director of Under the Volcano.
Loading...
or
Not Currently Available for Direct Purchase