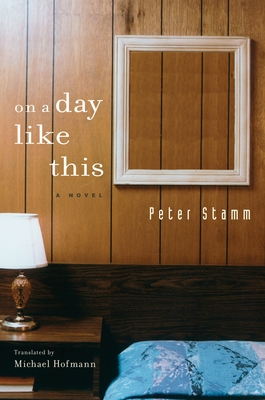 A new novel of artful understatement about mortality, estrangement, and the absurdity of life from the acclaimed author of Unformed Landscape and In Strange Gardens

On a day like any other, Andreas changes his life. When a routine doctor’s visit leads to an unexpected prognosis, a great yearning takes hold of him—but who can tell if it is homesickness or wanderlust? Andreas leaves everything behind, sells his Paris apartment; cuts off all social ties; quits his teaching job; and waves goodbye to his days spent idly sitting in cafes—to look for a woman he once loved, half a lifetime ago. The monotony of days has been keeping him in check; now he hopes for a miracle and for a new beginning.

Andreas’ travels lead him back to the province of his youth, back to his hometown in Switzerland where he returns to familiar streets, where his brother still lives in their childhood home, and where Fabienne, a woman he was obsessed with in his youth, visits the same lake they once swam in together. Andreas, still consumed with longing for his lost love and blinded by the uncertainty of his future, is tormented by the question of what might have been if things had happened differently.

Peter Stamm has been praised as a “stylistic ascetic” and his prose as “distinguished by lapidary expression, telegraphic terseness, and finely tuned sensitivity” (Bookforum). In On a Day Like This, Stamm’s unobtrusive observational style allows us to journey with our antihero through his crises of banality, of living in his empty world, and the realization that life is finite—that one must live it, as long as that is possible.

“Sensitive and unnerving. . . . An uncommonly intimate work, one that will remind the reader of his or her own lived experience with a greater intensity than many of the books that are published right here at home.” —The New Republic Online

“If Albert Camus had lived in an age when people in remote Norwegian fishing villages had e-mail, he might have written a novel like this.”—The New Yorker

“Unformed Landscape has a refreshing purity, a lack of delusion, a lack of hype.”—Los Angeles Times

Michael Hofmann has translated Bertolt Brecht, Joseph Roth, Patrick S, Herta Mueller, and Franz Kafka. He won the Translators' Association's Schlegel-Tieck Prize twice in 1988 for his adaptation of The Double Bass by Patrick S (1987), and in 1993 for his rendering of Wolfgang Koeppen's Death in Rome (1992). In 1999 he won the PEN/Book of the Month Club Translation Prize for The String of Pearls. His translation of his father's novel The Film Explainer, by Gert Hofmann, won the Independent Foreign Fiction Prize in 1995. He has written and translated more than 35 books, winning eight awards for his translations and his poetry.
Loading...
or support indie stores by buying on