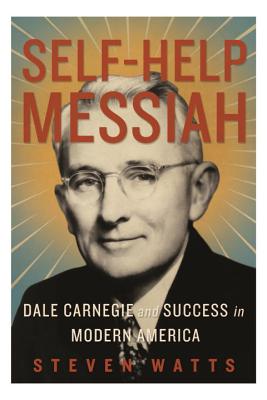 Before Stephen Covey, Oprah Winfrey, and Malcolm Gladwell there was Dale Carnegie. His book, How to Win Friends and Influence People, became a best seller worldwide, and Life magazine named him one of “the most important Americans of the twentieth century.” This is the first full-scale biography of this influential figure.

Dale Carnegie was born in rural Missouri, his father a poor farmer, his mother a successful preacher. To make ends meet he tried his hand at various sales jobs, and his failure to convince his customers to buy what he had to offer eventually became the fuel behind his future glory. Carnegie quickly figured out that something was amiss in American education and in the ways businesspeople related to each other. What he discovered was as simple as it was profound: Understanding people’s needs and desires is paramount in any successful enterprise. Carnegie conceived his book to help people learn to relate to one another and enrich their lives through effective communication. His success was extraordinary, so hungry was 1920s America for a little psychological insight that was easy to apply to everyday affairs.

Self-help Messiah tells the story of Carnegie’s personal journey and how it gave rise to the movement of self-help and personal reinvention.

"An insightful and comprehensive new biography." —The Economist

"[A] penetrating biography...Watts’s lucid prose and shrewd analysis gives us an absorbing portrait of Carnegie and the America he both reflected and shaped." —Publisher's Weekly (Starred Review)

“Self-Help Messiah is carefully researched and vigorously written, a pleasure to read and ponder. Don't miss it!” —Jackson Lears, author of Rebirth of a Nation: The Making of Modern America, 1877-1920

"Compelling...Watts captures a momentous period of change in America and makes a forceful case for Carnegie's significance in it." —Barnes & Noble Revicews

[Steven Watts's] descriptions...are poignant.  Watts shows how particularly attuned Carnegie was to the psychological needs of Americans beaten down by the Great Depression, who needed to hear that positive thinking would garner positive results." —NPR, Fresh Air

"A fascinating portrait of the father of self-help and incisive analysis of the mercurial era that produced him." —Kirkus Reviews

"Watts...is an astute analyst of his subject’s life and times." —Washington Post

"Watts captures a momentous period of change in America and makes a forceful case for Carnegie's significance in it." —The Christian Science Monitor

“[Watts] paints a fascinating picture of a man who ‘struggled to accommodate his yearning for affluence with a genuine respect for moral virtues’ and whose story ‘is, in essence, the story of America itself in a dynamic era of change.’” —City Journal

"[Self-Help Messiah] should be required reading for anyone concerned by the ongoing drift from what had been a republic of individual citizens downward into a class-defined social-nationalist state that would have appalled Kafka and Orwell...[Watts] does a masterful job of weaving in Carnegie’s impact on the lives of individuals being tossed by the waves of industrialization, urbanization and mass media that dominated the last century and this." —Washington Times

"[Watts] weaves a very compelling and readable story about the human spirit and the psychological needs of a whole generation who were desperate to believe positive thinking and self-development would create a new and brighter future." —Waterloo Region Record

Steven Watts has published a number of biographies on popular figures: The Magic Kingdom: Walt Disney and the American Way of Life, Mr. Playboy: Hugh Hefner and the American Dream, and The People’s Tycoon: Henry Ford and the American Century, which was chosen as one of five finalists for the 2005 Los Angeles Times Book Award in biography. He teaches history at the University of Missouri.
Loading...
or
Not Currently Available for Direct Purchase