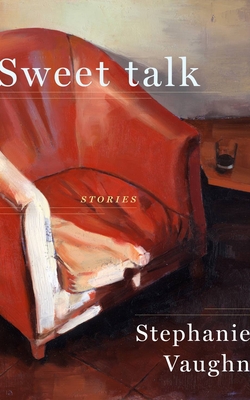 Stephanie Vaughn is a writer’s writer, one whose debut collection of stories, Sweet Talk, was published more than two decades ago to critical acclaim. Readers have come to these stories over the years through word of mouth, posting glowing reviews to their Goodreads pages and on their blogs—unanimously agreeing that this collection is a modern classic that deserves to be in print. Crafted in graceful, honest prose, Vaughn’s stories go straight to the heart of how people live, grow and survive.

“Powerful...The writing in Sweet Talk is pure and elegiac, as though it were piped in directly from the soul.” –New York Times Book Review

“Stephanie Vaughn is a natural writer, and her quirky vision makes the stories in Sweet Talk a collection of cool beauty.” –Boston Globe

“Beautifully written and insightful...Sweet Talk ignites a quiet series of explosions that will echo in a reader’s memory long after the book is closed.” –Philadelphia Inquirer

"Stephanie Vaughn [has an] astonishing, Grace Paley-like facility with the technical construction of the short story, and with the artistic achievement possible when a novel’s worth of emotions and relationships are compressed into brilliant, diamond-like stories." –West 10th

“Originally released two decades ago, when they were so widely acclaimed, these stories are now considered a ‘modern classic’…Vaughn’s language is smart, the metaphors are illustrative, and the characters are relatable…These ten stories take us through relationships, conflicts, imagination and death, in order to bring attention to the absurdity of ourselves, the people around us, and the connections that form between the two.” –The Coffin Factory

“[Vaughn’s characters] seem so real, despite how little you know about them. You want to hug some and shake others.  [Her] stories will make you laugh out loud, cry, and wonder how you would handle certain situations yourself.” –The Examiner

“At their best, which is nearly all the time, the stories in Stephanie Vaughn's collection Sweet Talk, follow their own internal rhythms with an innate emotional insight that feels both familiar and refreshingly unique.” –Critical Mob

“Vaughn’s writing is filled with dazzling sentences and emotional twists.  No character fails to make a joke when a hug might be more appropriate, and none can quite communicate the depths of their feeling to any of the others…Sweet Talk takes beautiful sentences and shapes them into explorations of lives in which laughter is everywhere, but always comes with a cost.” –Rain Taxi

"Readers will see connections to Tim O'Brien's The Things They Carried and Siobhan Fallon's You Know When the Men Are Gone. –Cleveland.com

Stephanie Vaughn was born in Millersburg, Ohio, and grew up in Ohio, New York, Oklahoma, Texas, the Philippine Islands, and Italy. She was educated at Ohio State University, the University of Iowa (Writers’ Workshop), and Stanford University, where she was a Stegner Fellow and later the Jones Lecturer in Creative Writing. Her stories have appeared in The New Yorker, Redbook, Antaeus, and O. Henry and Pushcart Prize collections. She has also written the introduction for an edition of Willa Cather’s My Ántonia. Stephanie Vaughn teaches English at Cornell University.
Loading...
or
Not Currently Available for Direct Purchase