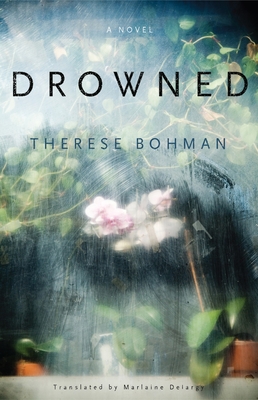 Drowned, set in the idyllic countryside during a short-lived Swedish summer, gets under one’s skin from the first page, creating an atmosphere of foreboding in which even the perfume of freshly picked vegetables roasting in the kitchen becomes ominous.

Marina has left behind her stalled relationship and floundering career in Stockholm to visit her sister in rural Skåne, where she lives in a house full of books, gorgeous flowers and, as Marina soon learns, many secrets. Nothing is as it seems in this spellbinding novel of psychological suspense that combines hothouse sensuality with ice-cold fear on every page.

More than a mere thriller, this debut novel delves deep into the feminine soul and at the same time exposes the continuing oppression of women in Sweden’s supposedly enlightened society. Mixing hothouse sensuality with ice-cold fear on every page, Drowned heralds the emergence of a major new talent on the international scene.

Praise For Drowned: A Novel…

"A slim novel with a taut narrative line and a sense of impending disaster....A tale of identity and tense personal relationships, one that as a film property would have appealed to Hitchcock or de Palma." —Kirkus Reviews (starred review)

“The seasonal and structural changes are deliberately understated and carry emotional weight into the climax, which Bohman deftly makes both foregone and suspenseful, leaving the reader wondering if everyone was doomed from the start.” —Publisher’s Weekly

“A horrifyingly compelling psychological thriller set in modern-day Sweden…Bohman manages to flesh out characters, setting, and plot in just over 200 pages, a feat that makes for a highly engaging and fast-paced read, yet one with great depth.” —Booklist

“[Bohman] writes with simplicity and restrain, and each detail adds to the slowly building tension…This is an artful psychological thriller, and utterly riveting, as it delves into the dark side of lust, sex and obsession.” —Herald Sun (Australia)

“Therese Bohman’s Drowned is a flawless story written in razor sharp prose, and is extremely hard to put down.” –Coffin Factory

“Drowned puts both its protagonist and its reader on edge almost from the beginning and never really allows either to become settled or comfortable. It's an effective, suspenseful psychological mystery.” –Shelf Awareness

“Action is absent, as are bold, aggressive female heroes. No politics, at least overtly, either. Just a wholly controlled, absorbing account of inexplicable female passivity in the 21st century, a condition that seems to affect certain twenty-somethings of Sweden as much as it does those in New York, if the TV show Girls is any indication…The translation, by Marlaine Delargy, is supple and effective and frequently mesmerizing.” –Reviewing the Evidence

“Most thrillers conclude by exposing a killer. Drowned, on the other hand, ends with a larger, more upsetting truth: how we expose ourselves…Author Therese Bohman could be lumped in with the other Scandinavian authors who have taken over the mystery world since The Girl with the Dragon Tattoo, but her story is more quiet and nuanced, her writing lush enough to create a landscape painting with every scene. No shoot-outs, showdowns or explosions end this story, but be prepared to gasp all the same, not with fear, but with understanding.” –Oprah

Therese Bohman is a columnist for Expressen, writing about literature, art, culture, and fashion. Her debut novel Drowned was published by Other Press in 2012. She lives in Sweden.

Marlaine Delargy has translated novels by John Ajvide Lindqvist, Kristina Ohlsson, and Helene Tursten, as well as The Unit by Ninni Holmqvist (Other Press) and Therese Bohman’s Drowned (Other Press). She lives in England.
Loading...
or support indie stores by buying on