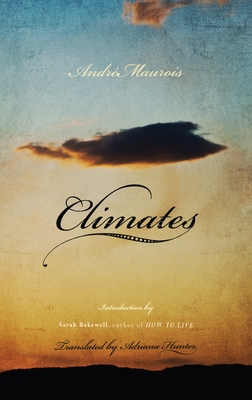 Written in 1928 by French biographer and novelist Andre Maurois, Climates became a best seller in France and all over Europe. The first 100,000 copies printed of its Russian translation sold out the day they appeared in Moscow bookstores. This magnificently written novel about a double conjugal failure is imbued with subtle yet profound psychological insights of a caliber that arguably rivals Tolstoy's. Here Phillipe Marcenat, an erudite yet conventional industrialist from central France, falls madly in love with and marries the beautiful but unreliable Odile despite his family's disapproval. Soon, Phillipe's possessiveness and jealousy drive her away. Brokenhearted, Phillipe then marries the devoted and sincere Isabelle and promptly inflicts on his new wife the very same woes he endured at the hands of Odile. But Isabelle's integrity and determination to save her marriage adds yet another dimension to this extraordinary work on the dynamics and vicissitudes of love.

Praise For Climates: A Novel…

"Stripped of its period shading, this is a sad and timeless tale of women on pedestals and the pain of loving not wisely, but too well."—Kirkus Review

"This lucid new translation of a novel originally published in 1928 probes the timeless complications, betrayals, and fascinations wrought by love...With Sarah Bakewell’s (How to Live) introduction providing historical context and insight into the autobiographical nature of Maurois’s material, this new edition of Climates marks a valuable reintroduction to a neglected master.—Publishers Weekly

"Climates...is orderly yet unsettling. It breathes an air that is profoundly civilized, but there is something violent and shattering about it, too. 'Even when it’s mutual, love is terrible,' says Philippe. It is terrible simply to be human—and there can be no subject more interesting to write about, or more beautiful, than that."—The New Yorker

"Climates is a delicious romantic bonbon that yanks the heartstrings."—Wall Street Journal

"A beautiful and heartbreaking novel of two marriages and the fractures endured by both...In this new translation, its penetrating examination of the psychology of love is made vivid for a new generation."—Granta

"An irresistible, micro-Proustian novel about a jealous husband and the woman who tries to save him."—Paris Review

"This new translation by Adriana Hunter fully captures the elegance and frivolity of its era. It artfully preserves timeless questions about the nature of love, too. Marcenat['s]...quest for the right “climate” for love shows the approach to be just as problematic nearly a century later."—The Daily Beast

"The stark truth of human nature paired with the romantic notion of love makes this story a whirlwind of happiness and tragedy."—Examiner.com

André Maurois (1885–1967), born Emile Herzog, was a writer of considerable versatility who achieved success as a biographer, historian, and novelist. In 1938 he was elected to the Académie française. He is perhaps most famous for his biographical studies of Shelley, Disraeli, Byron, Proust, and Victor Hugo. Climats (Climates) was originally published in 1928.

Adriana Hunter studied French and Drama at the University of London. She has translated more than fifty books including Enough About Love by Hervé Le Tellier (Other Press). She won the 2011 Scott Moncrieff Prize, and her work has been shortlisted for the Independent Foreign Fiction Prize twice. She lives in Norfolk, England.
Loading...
or
Not Currently Available for Direct Purchase