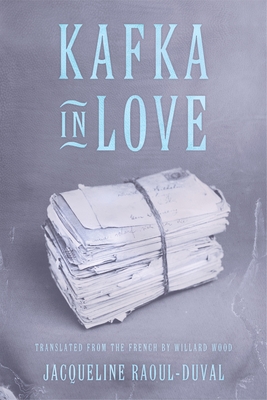 Kafka was an attractive, slender, and elegant man--something of a dandy, who captivated his friends and knew how to charm women. He seemed to have had four important love affairs: Felice, Julie, Milena, and Dora. All of them lived far away, in Berlin or Vienna, and perhaps that's one of the reasons that he loved them: he chose long-distance relationships so he could have the pleasure of writing to them, without the burden of having to live with them. He was engaged to all four women, and four times he avoided marriage. At the end of each love affair, he threw himself into his writing and produced some of his most famous novels: Amerika, The Trial, and The Castle.
In this charming book, author Jacqueline Raoul-Duval follows the paper trail of Kafka's ardor. She uses his voice in her own writing, and a third of the book is pulled from Kafka's journals. It is the perfect introduction to this giant of world literature, and captures his life and romances in a style worthy of his own.

Praise For Kafka in Love…

“What a gorgeous, brilliant strategy for framing a life, through a close reading and juxtaposition of Kafka’s loves. This novel must be the purest form of biography: part faithfully quoted from the letters and diaries, part richly imagined, it evokes a Kafka I had never known and sent me racing back to the major works, grateful for fresh insights. Raoul-Duval gives us the man—his ambivalences and anxieties, his passion and self-absorption, his genius. Unforgettable.” —Leonard Rosen, author of All Cry Chaos

"Kafka in Love will be of interest for any Kafka fan; the book’s gorgeousness alone makes it worth having, with the dreamy color combinations and delicious paper texture." —The Coffin Factory

"As a biography, the book follows in chronological order through Kafka’s early middle years until his death in 1924 at age 41. It is filled with intimate details of the food he ate, the cafés and theatres he went to, his dreams, his insomnia, his illnesses, and above all, his tortured, guilty obsessions with truth, sex, and writing." —Historical Novel Society

"Raoul-Duval does a fabulous job of separating her voice from Kafka’s, but at the same time seamlessly flowing them together. If you enjoy Kafka’s work, or just want to read a tragic love story, this is your new book." —The Examiner

"Through Kafka’s turbulent personal life, the reader can see the themes of his most enduring works of fiction taking hold in the forefront of his mind; humiliation, fatalism, and trial." —The Daily Beast

"This window into the tortured and torturing Franz Kafka parallels the tragic and absurd characters he so expertly wrote about, and while we have long taken his subjects to be only mildly hidden reflections of self, Kafka in Love reinforces the concept with fantastic results." —Leo Weekly

"Just like Kafka, this book is brilliant, difficult, and alternates between nightmares and unpleasant dreams." —City Book Review

"[Kafka in Love] does a better, more moving job than any...straightforward biographies in showing us the flesh-and-blood Kafka...Raoul-Duval expertly captures this and every other aspect of the writer– the movie buff, the diarist, the fantastic correspondent, the office worker, the dreamer, the oddball– and the perennial victim of boredom...a perfect reminder not only of fiction’s power to shape fact but also of Kafka himself in all his...path-breaking genius." —Open Letters Monthly

Jacqueline Raoul-Duval is an editor, translator, and novelist. She is the author of Le Charme discret de l’adultère (The discreet charm of adultery) and Un amour amer (A bitter love).

Willard Wood has translated extensively from the French, including The Last Rendezvous by Anne Plantagenet (Other Press) and the novels of Goncourt Prize–winning author Jean-Christophe Rufin. A recent NEA Fellow in Translation, he lives and works in Norfolk, Connecticut.
Loading...
or
Not Currently Available for Direct Purchase