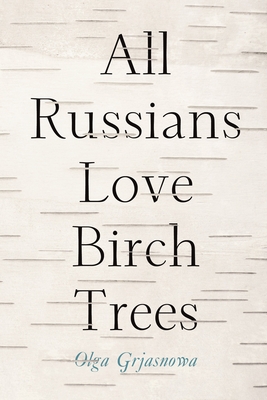 An award-winning debut novel about a quirky immigrant’s journey through a multicultural, post-nationalist landscape

Set in Frankfurt, All Russians Love Birch Trees follows a young immigrant named Masha. Fluent in five languages and able to get by in several others, Masha lives with her boyfriend, Elias. Her best friends are Muslims struggling to obtain residence permits, and her parents rarely leave the house except to compare gas prices. Masha has nearly completed her studies to become an interpreter, when suddenly Elias is hospitalized after a serious soccer injury and dies, forcing her to question a past that has haunted her for years.

Olga Grjasnowa has a unique gift for seeing the funny side of even the most tragic situations. With cool irony, her debut novel tells the story of a headstrong young woman for whom the issue of origin and nationality is immaterial—her Jewish background has taught her she can survive anywhere. Yet Masha isn’t equipped to deal with grief, and this all-too-normal shortcoming gives a particularly bittersweet quality to her adventures.

Praise For All Russians Love Birch Trees: A Novel…

“All Russians Love Birch Trees by Olga Grjasnowa is an astounding debut novel, both political and personal, sexual and full of grief. It captures beautifully and viscerally what it’s like to lose your home due to traumatic events, what it’s like to be neither a tourist nor a native no matter where you go looking for what’s missing in you. To paraphrase Yevtushenko’s famous line – borders are scars on the face of the planet. This book proves it, and how.” —Ismet Prcic, author of Shards, a New York Times Notable Book of the Year

“Olga Grjasnowa paints a searing portrait of young adulthood in this ambitious novel, as we follow her characters from Frankfurt to Jerusalem, from their haunted pasts and into their uncertain futures. Darkly funny and totally devastating, All Russians Love Birch Trees will haunt you.” —Leigh Stein, author of The Fallback Plan

“[Grjasnowa] reveals herself to be an expert chronicler of modern displacement and of the scars left by the wars that followed the Soviet Union’s breakup.” —Publishers Weekly

“An extremely compelling read… just because you have an unusual background, doesn't mean you know how to tell a good story, and this is something that Grjasnowa certainly knows how to do…Grjasnowa has strong voice, which she has applied to a very ambitious and seemingly personal subject, to give us an admirable debut novel…a truly gifted writer…[who] has a very bright future ahead of her...”—Yahoo! Voices

“We know about the immigrant perspective from an American perspective, but Grjasnowa gives us a fresh, important understanding from the European perspective…Grjasnowa tells her story effectively because she works through the personal, which results in a touching and thought-provoking debut novel.”—Library Journal

"Grjasnowa elegantly balances explanations and demonstrations so that Masha's world comes to feel almost familiar. All Russians Love Birch Trees is part of a new global literature that sees foreignness as a condition of familiarity, that understands alienation as a way of life." —Shelf Awareness

“Here the world comes to you, as it never has appeared to you in a novel. With power, with wit, with wisdom and clarity, with subtlety and grief.” —Elmar Krekeler, Die Welt

"Grjasnowa...imbues the narrative with a unique set of circumstances related to national and cultural identity...express[ing] the tumultuousness and indirect trajectories of youth against a world that’s anything but fixed." —Minneapolis Star Tribune

“[All Russians Love Birch Trees] is an insightful look at three countries, at the experience of being an immigrant, and at the pain of loss. It’s a quiet yet rich novel that speaks to experiences often not represented in literature and also to the universal feelings of grief and isolation.” —Bustle

"Masha, an Azerbaijani-born student living in Germany, flees to Israel after her boyfriend's death, in this provocative first novel." –Oprah.com

"[A] fascinating tale in which the violent background supersedes the protagonist who takes readers as a person without a homeland from Azerbaijan to Germany to Israel... Timely with the immigration debate in America, readers will appreciate the harrowing journey." – Genre Go Round Reviews

“This is a hard and harrowing tale about losing your sense of identity….[Olga Grjasnowa’s] strong voice makes Masha and the rest of cast come across as real multidimensional characters…tackling always tricky task of describing one's life in a multicultural society and the resulting internal turmoil which comes from having your own cultural identity displaced.  All Russians Love Birch Trees…is a stunning novel about loss—one which heralds the arrival of a remarkably gifted author.” —Upcoming4.Me

"Azerbaijan-born German novelist Olga Grjasnowa explores this terrain of displacement and loss with an unsparing vividness...All Russians Love Birch Trees was lauded by critics when it first appeared in Germany, winning its author the Klaus Michael Kuhn prize for a debut novel and a place on the long list for the Deutscher Buchpreis (the German equivalent of the Man Booker). The novel was also adapted for stage and performed at the Maxim Gorky Theater in Berlin. Grjasnowa deserves this acclaim not only for her fearless exploration of one of the most fractious issues in contemporary Germany, but also for her stellar literary gifts... All Russians Love Birch Trees is much more than a political tract. Masha is a beautifully compelling character, someone who has witnessed horrors, and faced difficulties that would have beaten down many other people, but who moves on with a relentless determination." —The Rumpus

“In All Russians Love Birch Trees, Grjasnowa…exposes not just the limitations of identity but also the violence it imposes.” –Public Books

“It’s a relevant book for 2017, a lyrical novel with a deep political resonance and one that emphatically rejects the tribalism and anti-immigrant sentiments currently on the rise in the U.S. and abroad.”—Lava Step Laboratory

Olga Grjasnowa was born in 1984 in Baku, Azerbaijan, grew up in the Caucasus, and has spent extended periods in Poland, Russia, and israel. She moved to Germany at the age of twelve and is a graduate of the German institute for Literature/Creative Writing in Leipzig. In 2010 she was awarded the Dramatist Prize of the Wiener Wortstätten for her debut play, Mitfühlende Deutsche (Compassionate Germans). She is currently studying dance science at the Berlin Free University.

Eva Bacon studied German and English Literature at the Ludwig Maximilians University of Munich and has worked as an international literary scout. This is her first translation of a novel. She lives in Brooklyn.
Loading...
or
Not Currently Available for Direct Purchase