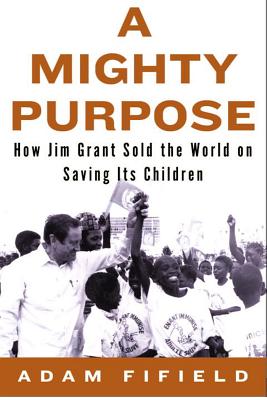 How Jim Grant Sold the World on Saving Its Children

Nicholas Kristof hailed Jim Grant as a man who “probably saved more lives than were destroyed by Hitler, Mao, and Stalin combined.” Nominated by President Jimmy Carter to head UNICEF, Grant ran the United Nations agency from 1980 to 1995 and became the most powerful advocate for children the world has ever seen. To ensure that even children trapped by war received health care and immunizations, he brokered humanitarian ceasefires by exploiting the political self-interests of presidents and warlords alike. Grant at first met fierce resistance at the United Nations and in his own organization, and some thought his ideas were crazy and dangerous. But as he kept toppling obstacle after obstacle, he eventually won over even his most stubborn detractors. Grant spearheaded a historic surge in worldwide childhood immunization rates and launched a movement that profoundly altered the face of global health and international development.

Praise For A Mighty Purpose: How Jim Grant Sold the World on Saving Its Children…

"Adam Fifield’s entertaining biography of the little-recognized Grant shows that entrepreneurs can appear in the most unpromising environments...Grant was the right man in the right place at the right time." —The Wall Street Journal

"Fifield recounts Grant’s journeys from Cambodia to Somalia, navigating treacherous political landscapes to deliver aid to children and their families. Admired for his ability to mesmerize politicians, government bureaucrats, warlords—anyone who might stand in the way of his mission to deliver food and medicine to children—Grant quadrupled childhood immunization rates and is estimated to have saved tens of millions of children." —Booklist

“Adam Fifield has written an extraordinary book about an extraordinary man who turned violent enemies into willing allies to save the lives of millions of impoverished children around the world. The name and work of Jim Grant, ‘the Mad American,’ has somehow been lost to history, but Fifield resurrects his life and impact in a story that shifts from the comfortable boardrooms of the United Nations to stifling grass huts in Africa to the frozen winter streets of Beijing. Many people know UNICEF only from its door-to-door collections at Halloween, but the full account is so much more complicated and compelling. In A Mighty Purpose, Fifield deploys skills of deep reporting and nuanced story-telling to deliver a book that’s all treat and no trick.” —Jeff Gammage, author of China Ghosts: My Daughter’s Journey to America, My Passage to Fatherhood

“Jim Grant’s successful quest to save millions of the world’s poorest children from succumbing to common and treatable diseases is an extraordinary story of obsessive, unstoppable determination.  Grant took on the deadliest childhood diseases affecting kids living with extreme adversity. But sometimes his biggest obstacles were the international bureaucrats who disagreed with Grant’s strategies and tried to marginalize his efforts. This is a terrific read and inspiring story!” —Irwin Redlener, MD, President and Co-Founder of the Children’s Health Fund

“A remarkable visionary and results-driven leader . . . Grant’s work is especially inspirational when you realize that he achieved success despite a world recession and global debt crisis in the 1980s. We can draw lessons from his leadership now, in our own tough economic times.” —Bill Gates on James P. Grant

“Jim Grant’s contributions to the world’s children are unparalleled.  To the astonishment of many, he inspired a sweeping global focus and investment in child survival, resulting in historic drops of preventable child deaths that continue to this day.  Whether negotiating cease-fires between warring factions to bring aid to children, or convincing leaders to carve money from their budgets for children’s health, he galvanized a beleaguered world to put children first.” —Caryl M. Stern, President and CEO, U.S. Fund for UNICEF

Praise for A Blessing Over Ashes:

“This is a special book, maybe a great one.” —Los Angeles Times Book Review

“With A Blessing Over Ashes, Adam Fifield has written a Huckleberry Finnfor the modern age.” —Samuel G. Freedman, author of Small Victories

Adam Fifield’s work has appeared in the New York Times, Washington Post, Christian Science Monitor, Chicago Sun-Times, Village Voice, Philadelphia Magazine, and Philadelphia Inquirer, where he was a staff writer. He is also the author of A Blessing Over Ashes (William Morrow, 2000), a memoir about his Cambodian foster brother. From 2007 to 2013, he served as the Deputy Director of Editorial and Creative Services at the U.S. Fund for UNICEF.
Loading...
or
Not Currently Available for Direct Purchase