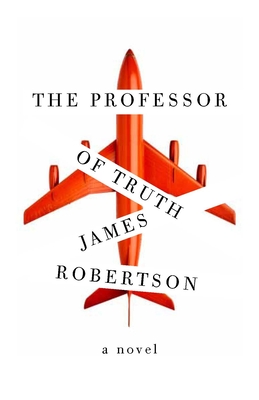 The Professor of Truth

Twenty-one years after his wife and daughter were killed in the bombing of a plane over Scotland, English lecturer Alan Tealing persists in trying to discover what really happened on that terrible night. Over the years, he obsessively amasses documents, tapes, and transcripts to prove that the man who was convicted was not actually responsible, and that the real culprit remains at large.

When a retired American intelligence officer arrives on Alan’s doorstep on a snowy night, claiming to have information about a key witness in the trial, a fateful sequence of events is set in motion. Alan decides he must confront this man, in the hope of uncovering what actually happened. While Robertson writes with the narrative thrust of a thriller, The Professor of Truth is also a graceful meditation on grief, and the lengths we may go to find meaning in loss.

Praise For The Professor of Truth: A Novel…

"[The Professor of Truth] provides the framework for a deeper philosophical treatment of justice and loss and grief, all well served by Robertson’s measured, literary prose. Robertson makes a case for the messy complexity of truth." —Publishers Weekly

"Robertson writes brilliantly about the quest for truth and hints at the possibility of personal redemption and transformation." —Kirkus (starred review)

"Impressively blends the political with the personal, and a healthy dash of the metaphysical, as well. Robertson knows that it’s often the pursuit of truth, regardless of the truth itself, by which we should measure the work of a man’s life." —Minneapolis Star Tribune

"The Professor of Truth moves at the quick pace you’d expect from a thriller, but it’s more contemplative and thoughtful. It’s a well-rounded novel that will leave you thinking long after the last pages are turned." —S. Krishna's Books

"Thought-provoking and engaging, Robertson’s novel is a literary thriller with a conscience." —The Plain Dealer

“[A] brilliant portrayal of grief, loss, of how little justice there really is in the world...[The Professor of Truth] is a thought-provoking tragedy of someone imprisoned by his certainty…Robertson, who is one of Scotland’s more respected novelists—and deservedly so—may well have accomplished what he set out to do in revitalizing public awareness of the Lockerbie bombing.—TruthDig

James Robertson is a multiple prize-winning Scottish author and poet. He has published four previous novels: The Fanatic; Joseph Knight, which won the Scottish Book of the Year Award and the Saltire Prize; The Testament of Gideon Mack, which was a Booker Prize finalist and a Richard & Judy book club pick, and has sold more than 250,000 copies in the UK; and his most recent novel, And the Land Lay Still, winner of the Saltire Prize.
Loading...
or
Not Currently Available for Direct Purchase