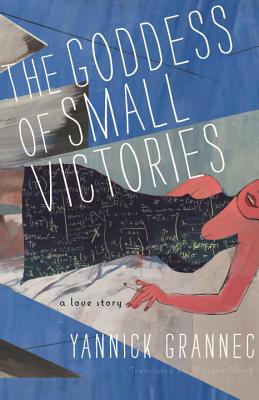 The Goddess of Small Victories (Hardcover)

An internationally best-selling debut novel about the life, marriage, and legacy of one of the greatest mathematicians of the last century
Princeton University 1980.Kurt Godel, the most fascinating, though hermetic, mathematician of the twentieth century, has just died of anorexia.His widow, Adele, a fierce woman shunned by her husband's colleagues because she had been a cabaret dancer, is now consigned to a nursing home. To the great annoyance of the Institute of Advanced Studies, she refuses to hand over Godel's precious records. Anna Roth, the timid daughter of two mathematicians who are part of the Princeton clique, isgiven the difficult task of befriending Adele and retrieving the documents from her. As Adele begins to notice Anna's own estrangement from her milieu and starts to trust her, she opens the gates of her memory and together they travel back to Vienna during the Nazi era, Princeton right after the war, the pressures of McCarthyism, the end of the positivist ideal, and the advent of nuclear weapons.It is this epic story of a genius who could never quite find his place in the world, and the determination of the woman who loved him, that will eventually give Anna the courage to change her own life.

Yannick Grannec is a graphic designer and illustrator. After obtaining a degree in the Sciences, she began studying art and joined Les Ateliers, where she received a degree in design. A Freelance Art Director, Professor of Fine Arts in Reims, and enthusiast of Mathematics, she lives in Saint Paul de Vence. This is her first novel.

Willard Wood has translated widely from the French, including "The Last Rendezvous" by Anne Plantagenet (Other Press) and the novels of the Goncourt Prize-winning author Jean-Christophe Rufin. A recent NEA Fellow in Translation, he lives and works in Connecticut. The author lives in Saint Paul de Vence, France.

Praise For The Goddess of Small Victories…

"Suffice it to say that THE GODDESS OF SMALL VICTORIES is an astonishing novel." --Le Point

"A first novel as ambitious as it is accessible." --Le Soir

Why do you think Yannick Grannec chose to write about Kurt Gödel’s life from the perspective of his wife? How does this choice change what we see of Gödel? How is it different from what we might have read had this been a biography of the mathematician?

Anna often reflects on the sense of purposelessness she feels in her life. (See “The sum of little bits of wasted time and the lateness of others added up to a lost life,” p 27; “What worries me is that I’m not doing anything with my life,” p 183.) How does this relate to her professional ambition and her relationships with Adele, her parents, and Leo? How does it compare to Kurt Gödel’s passion for his work?

How does Adele and Anna’s relationship change over the course of the novel? Why does Adele open up to her and not to any of the other people sent to retrieve the Nachlass? What light does Adele’s story of her life with Kurt shed on Anna’s own life?

On page 29 Adele says, “Humor is requisite for survival, young lady. Especially here.” What purpose does humor serve in the novel?

What is the effect of viewing significant historical events and individuals, such as the Anschluss, J. Robert Oppenheimer, and Albert Einstein’s death, through the lens of Adele and Kurt’s marriage?

Adele, Anna, and Kurt all feel marginalized by their communities. Why is Adele able to communicate her lonesomeness to Anna but not to Kurt? In what ways do Anna and Adele’s outcast status differ from Kurt’s?

Adele and Kurt both are more concerned with their personal lives than with the political situations around them. How is this reflected in Anna’s initial preoccupation with getting Kurt’s papers from Adele?

What is the difference between the story Adele tells herself and the account Elizabeth Glinka gives about the Gödels’ home life? Does it alter Anna’s or your understanding of Adele and her life with Kurt?

On page 233 Adele tells Albert Einstein, “A good excuse to share nothing and keep everything among yourselves, among the elect. I thought you were more democratic, Herr Einstein.” What do you think about Adele’s assertion that the intelligentsia purposefully limit access to their work? Can her observation apply to her relationship with Kurt Gödel?

Adele believes that she was created “to keep a certain genius from slipping away before his time,” that she “had been compost for the sublime.” In contrast, Anna concludes that “No one has a mission. Adele had loved Kurt; nothing was more important.” With whom do you agree and why?