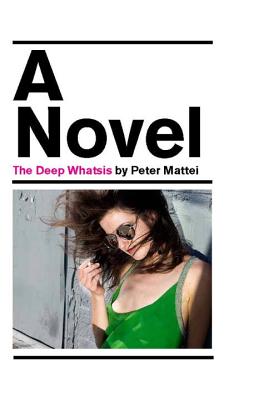 The Deep Whatsis follows a brilliant antihero staggering into madness as he navigates among Brooklyn hipsters, advertising tyrants, corporate hypocrisy, and the ghosts of his past.
Meet Eric Nye: player, philosopher, drunk, sociopath. A ruthless young Chief Idea Officer at a New York City ad agency, Eric downsizes his department, guzzles only the finest Sancerre, pops pills, and chases women. Then one day he meets Intern, whose name he can't remember. Will she be the cause of his downfall, or his unlikely awakening?
A gripping and hilarious satire of the inherent absurdity of advertising and the flippant cruelty of corporate behavior, The Deep Whatsis shows the devastating effects of a world where civility and respect have been fired.


Praise For The Deep Whatsis…

"With zingy, hilarious glee, Peter Mattei takes a sharp stick and pokes it at many deserving underbellies: the puffery of corporate America; hipsters, yoga dudes, and the general pretentiousness of north Brooklyn; and many more. The Deep Whatsis is a provocative, darkly subversive, deeply satisfying novel." -Kate Christensen, winner of the 2008 PEN/Faulkner Award and author of The Astral

"[A] morbidly satiric look at corporate culture at the crossroads of art and consumerism...Mattei serves up a rampant critique of haute New York society." -Publishers Weekly

Sharp and insightful, The Deep Whatsis is a vivid portrait of a young man’s loosening grip on his humanity in the midst of the random cruelty of big business downsizing...His vision of big-city corporate life stuns with accuracy."—New York Journal of Books

"The Deep Whatsis
is a novel about silly infatuation, drugs, and near-awakenings. It’s also an eloquent, punchy sendup of the advertising business and the culture that feeds it. Mattei has created a character reminiscent of Bret Easton Ellis’ Patrick Bateman, Mark SaFranko’s Max Zajack, Ben Lerner’s Adam Gordon, and any of Tao Lin’s chemically dependent narrators. That Eric Nye’s voice is fresh and unique is a testament to Mattei’s talent, and the reason why fans of well-written satire should read this novel."—Rumpus

"The Deep Whatsis is a terrific satire that lampoons abusive corporate values in which dignity means nothing...readers will relish Peter Mattei’s mirthful mocking of the amoral money-makers."—Genre Go Round Reviews

"Original, subversive and savagely funny, this book...offers a dark portrait of the cutthroat nature of the corporate world and the vapidity of our consumerist society in which the void left by a lack of humanity is filled with meaningless objects."—His Futile Preoccupations

"Beautifully rendered...The Deep Whatsis, for all its wit and charm, is a sober account of a man falling apart." —Word Riot

"Mattei has created an unforgettable character." —The Oxonian Review

Peter Mattei is a novelist, playwright, filmmaker, and writer for television and film. His award-winning plays have been staged in various theaters across the country to critical acclaim, and his first feature film, Love in the Time of Money, was developed at the Sundance Directors Lab and produced by Robert Redford. He's created and written original series pilots for HBO, CBS, ABC, FOX, and other networks. He splits his time between Brooklyn, upstate New York, andAustin, Texas.