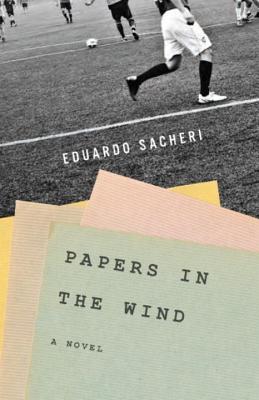 Papers in the Wind

From the best-selling author of The Secret in Their Eyes, an adventure about friendship, soccer, and good humor When Alejandro "Mono" dies of cancer, his brother and two closest friends, a tight-knit group since childhood, are left to figure out how to take care of his young daughter, Guadalupe. They want to give her all the love they felt for Mono and secure her future, but there isn't a single peso left in the bank. Mono invested all of his money in a promising soccer player whose talents haven't panned out, and the three hundred thousand dollars Mono spent on his transfer is soon to be lost for good. How do you sell a forward who can't score a goal? How do you negotiate in a world whose rules you don't know? How do you maintain relationships when repeated failures create fissures in lifelong loyalties? Fernando, Mauricio, and Ruso pool the few resources in their arsenal to come up with strategies--from harebrained to inspired--in their desperate attempt to recoup Mono's investment for Guadalupe. Following the lives of four distinct characters, who, despite their great differences, still manage to find solace and pride in one another, Papers in the Wind is a tribute to friendship and proof that love and humor can triumph over sadness.

Praise For Papers in the Wind…

“A touching and amusing look at friendship through the eyes of four Argentine soccer fans…the clever ending... makes the tale worth the telling. Overall, the book is a pleasure to read.” —Kirkus

“An entertaining and affecting novel of friendship, faith, and sport.” –Booklist

“When Papers in the Wind by Eduardo Sacheri, a novel about soccer translated from Spanish by Mara Faye Lethem, arrived on my desk, it pushed everything else out of the way.” —Shelf Awareness

“Sacheri succeeds like few others in giving his stories a universal dimension—the stories of ordinary people where the commonplace becomes epic.” —Juan José Campanella, Oscar-winning director of The Secret in Their Eyes

“With his stories of soccer and descriptions of its players and fans, Sacheri reconfirms his previous literary merits: the ability to create environments with great sensitivity and narration, giving his words just the right tone, and suggesting that something is left unsaid.” —Revista Acción

Eduardo Sacheri was born in 1967 in Buenos Aires. He is a professor of history as well as a writer of fiction. His first collection of short stories was published in Spain in 2000, and three later collections have become best sellers in his native Argentina. The film adaptation of his novel The Secret in Their Eyes won the 2009 Academy Award for Best Foreign Language Film, and the book was published in English the following year by Other Press. Mara Faye Lethem has translated novels by David Trueba, Albert Sanchez Pinol, Javier Calvo, Patricio Pron, and Pablo De Santis, among others. Her translations have appeared in The Best American Nonrequired Reading 2010, Granta, Paris Review and McSweeney's. She is currently translating a novel by Marc Pastor.
or
Not Currently Available for Direct Purchase