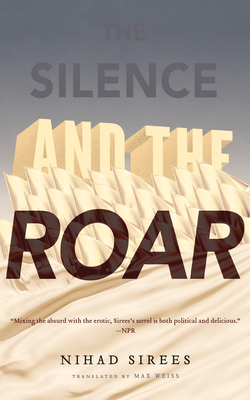 The Silence and the Roar

Available in English for the first time, The Silence and the Roar is a funny, sexy, dystopian novel about the struggle of an individual over tyranny.

The Silence and the Roar follows a day in the life of Fathi Sheen, an author banned from publishing because he refuses to write propaganda for the ruling government. The entire populace has mobilized to celebrate the twenty-year anniversary of the reigning despot in this unnamed Middle eastern country. The heat is oppressive and loudspeakers blare as an endless parade takes over the streets. Desperate to get away from the noise and the zombie-like masses, Fathi leaves his house to visit his mother and his girlfriend, but en route stops to help a student who is being beaten by the police. Fathi’s iD papers are confiscated and he is told to report to the police station before night falls.

When Fathi turns himself in, he is led from one department to another in an ever-widening bureaucratic labyrinth. His only weapon against the irrationality of the government employees is his sense of irony. Tinged with a Kafkaesque sense of the absurd, The Silence and the Roar explores what it means to be truly free in mind and body.

Praise For The Silence and the Roar: A Novel…

"Sirees takes on, with piercing insight, the huge themes of freedom, individuality, integrity, and, yes, love, in this beautiful, funny, and life-affirming novel...[The Silence and the Roar] indisputably connects to current events, but its value as art and political commentary is timeless. Sirees has written a 1984 for the 21st century."—Publishers Weekly, choice for Top Ten Books of 2013

"In this short, satiric fable, a formerly famous writer silenced by an authoritarian regime finds himself in a predicament where Kafka meets Catch-22."—Kirkus

“With biting humor Nihad Sirees reveals the extraordinary injustices of ordinary life under the oppressive rule of the "Leader." This country remains unnamed but the richly rendered story illuminates the hard reality of the many Middle Eastern states in political transition today."—Shahan Mufti, journalist and author of The Faithful Scribe

"A chillingly prophetic novel. In spare, razor-sharp prose, Sirees describes the effects of authoritative rule on the psyche of an unbreakable and irrepressible artist. Timely, powerful, and searing."—Randa Jarrar, author of Map of Home

"The theatre of the absurd that is everyday life in a totalitarian society is the subject of Nihad Sirees's urgent new novel, a searing political allegory in the tradition of Orwell and Camus. The portrait of a banned writer wandering the streets of a nameless dictatorship that Arab readers will recognize all too well, Sirees's book would be unbearably bleak if it weren't so funny: its narrator's caustic irreverence is his rebellion against the tyrant's roar that would reduce him to silence."—Adam Shatz, Contributing Editor, London Review of Books

"The wonderful thing about Sirees’s small book...is that while it is absolutely and specifically about Syria, Sirees has made it large enough to incorporate your story as well."—Kenyon Review

"Called the Kafka of the Middle East, [Sirees] dismantles with metaphoric touches all the apparatus of a system that compress the individual and his freedom of speech."—France Inter

"[Sirees] lasciviously mocks with a caustic irony the one he names 'the leader.'"—Le Journal du Dimanche

"Sirees’ novel can, and should, challenge us to expand our definition of what is personal, and move us to hear the stories of those whose lives are altered by the impact of political strife."—Think Christian

"It should be required reading."—The Guardian

"...it's Sirees's light touch with his subject matter that lends The Silence and the Roar so much of its power."—The Guardian

Nihad Sirees is a civil engineer who was born in the ancient Syrian city of Aleppo in 1950. His other novels include Cancer, The North Winds, and A Case of Passion. He has also written several plays and television dramas, the latest of which, Al Khait Al Abiadh (The First Gleam of Dawn), provides a frank depiction of the country's government controlled media and has been wildly acclaimed for its boldness and controversial nature. Branded an opponent of the government, publication of several of his works was forbidden by government censors.  His subsequent novels were published abroad. He left Syria in January, 2012, to avoid Syrian security services. Since that time he has lived in self-imposed exile in Cairo, Egypt.

Max Weiss is an Assistant Professor of History and Near Eastern Studies at Princeton University. He is author of In the Shadow of Sectarianism: Law, Shi`ism, and the Making of Modern Lebanon, co-editor of Facing Fear: The History of an Emotion in Global Perspective and translator, most recently, of Hassouna Mosbahi, A Tunisian Tale and Samar Yazbek, A Woman in the Crossfire: Diaries of the Syrian Revolution.